We are on our mooring at Orford.  It’s summer solstice.

Since relaunching on the 13th April we have sailed only 55 NM and some of that was being towed.

On the 1st May we sailed up river to anchor above Aldeburgh in the company of Doc and ‘Tuesday’. 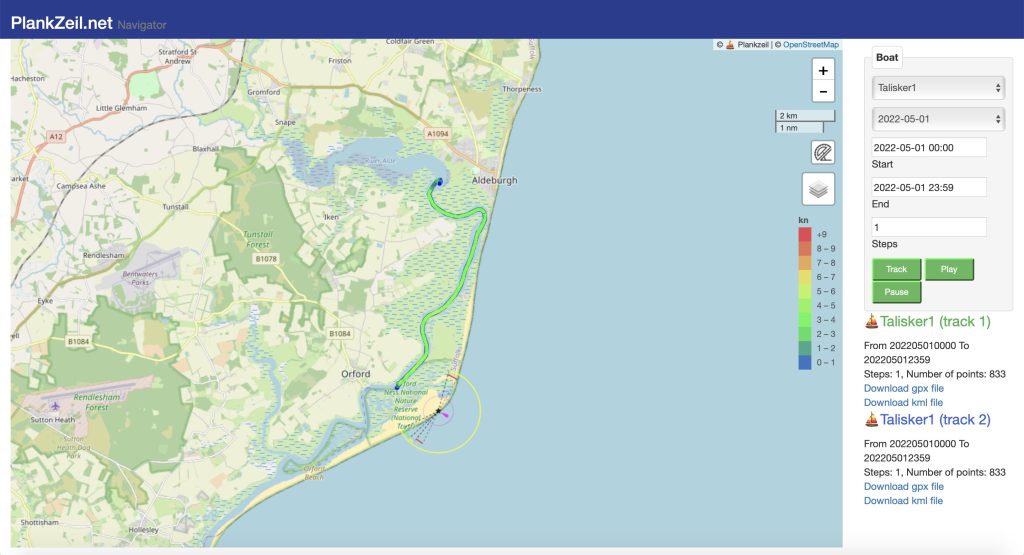 1st May … we sailed up river to anchor above Aldeburgh in the company of Doc and ‘Tuesday’.

I slipped the mooring under stay sail and just turned the engine over briefly just before sailing through the moorings at Aldeburgh.  Both boats anchored for the night off Westrow Point.  It was lovely to be back on the water, in the company of ‘Tuesday’ and watch the world go by.  Or rather … the remarkable ebb and flood of the river.  ‘Tuesday’ at anchor is always such a reassuring sight. 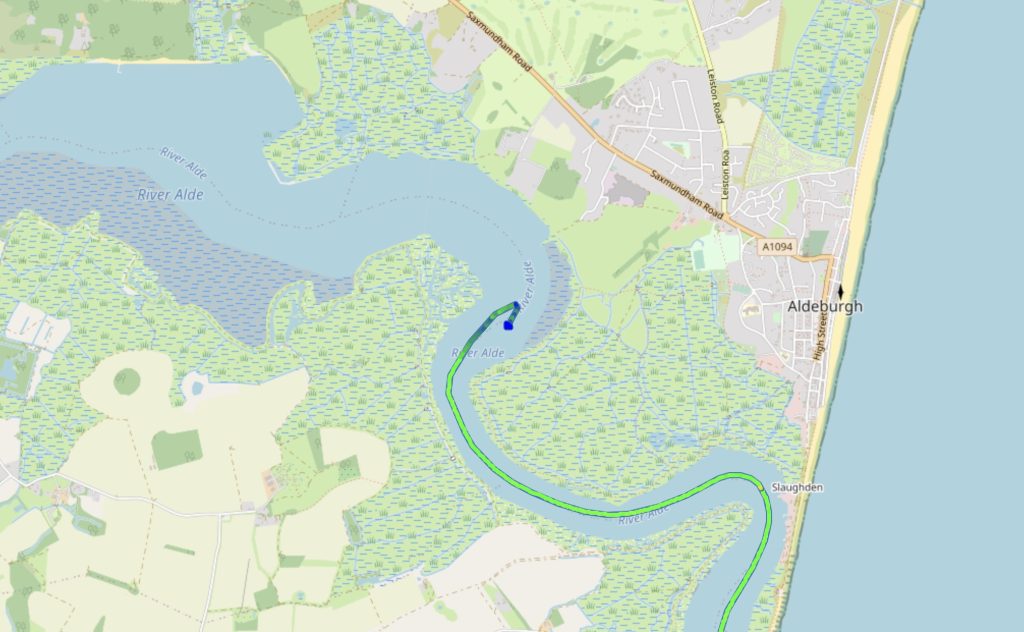 Jon Wainwright wrote a splendid book ‘Only So Many Tides’.  Jon had heart problems and when he wrote his book he knew his days, and tides were numbered.

I am so fortunate to sail in tidal waters. 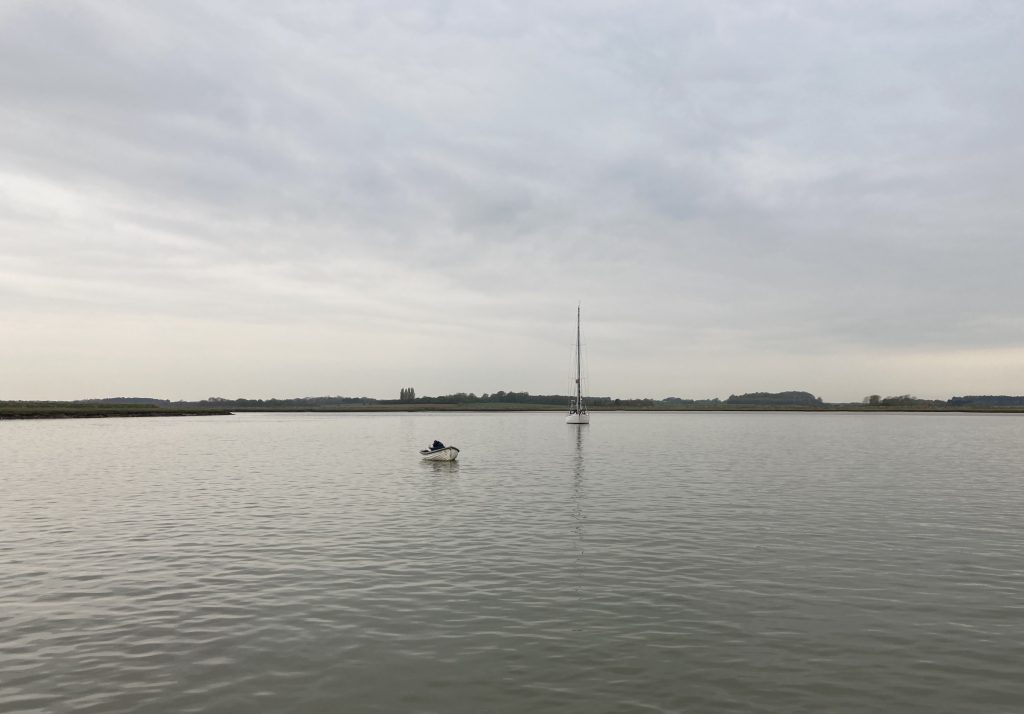 1st May At anchor above Aldeburgh. Doc drifting back towards ‘Tuesday’. 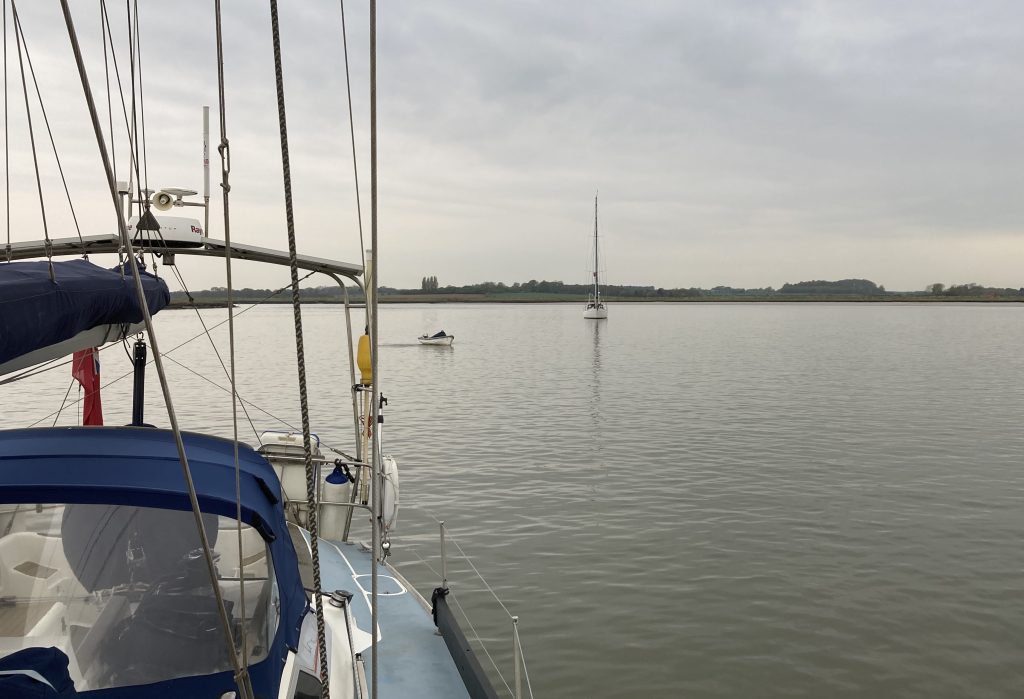 On the 2nd May I had to be home.  Doc and ‘Tuesday’ were going to follow us back to the moorings at Orford.

It was a still fine day and the river had an hour or so of the remaining flood.  I started the engine and loitered around the anchorage marking waypoints for the deeper holes for anchoring later in the summer.  Engine ticking over we headed off towards the start of the Aldeburgh moorings.  The engine missed and then there was a rattling grating sound and the engine was dead.  I turned round and slowly took the flood back to ‘Tuesday’ and lowered the anchor. 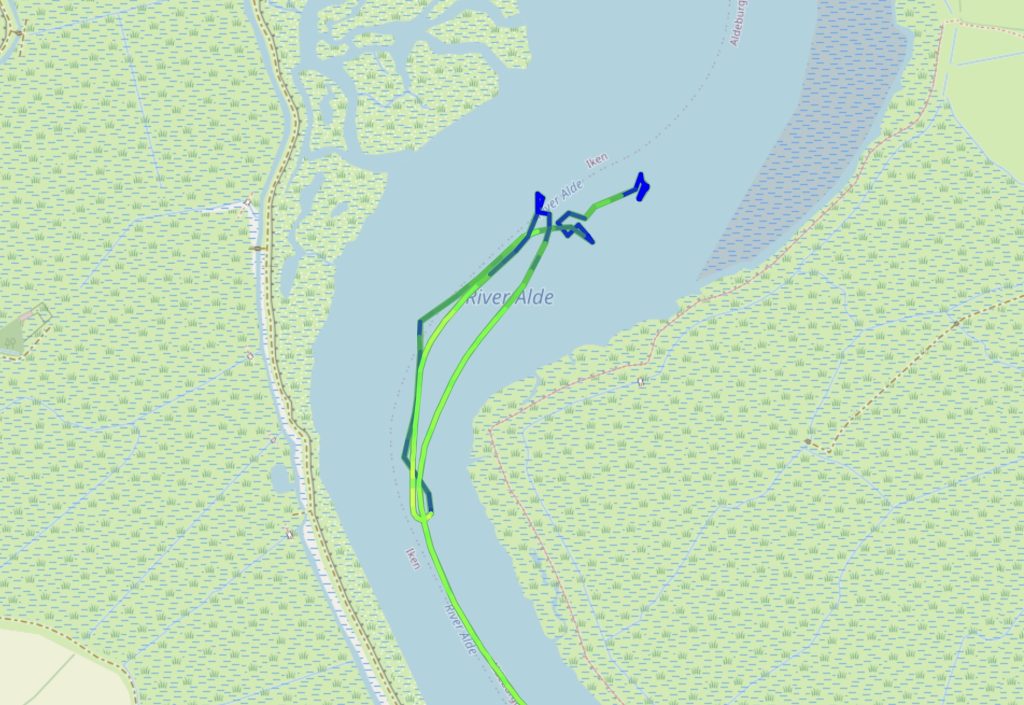 2nd May I turned round and slowly took the flood back to ‘Tuesday’ and lowered the anchor.

Checking for the obvious there was no fuel starvation.  Doc and ‘Tuesday’ towed us back to the mooring at Orford where we tried to fault find and start the engine again. 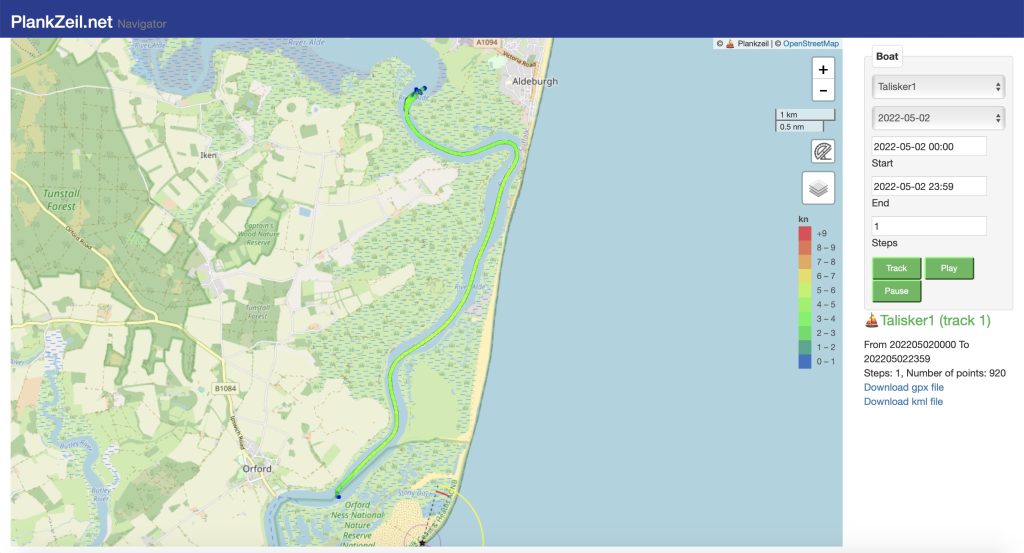 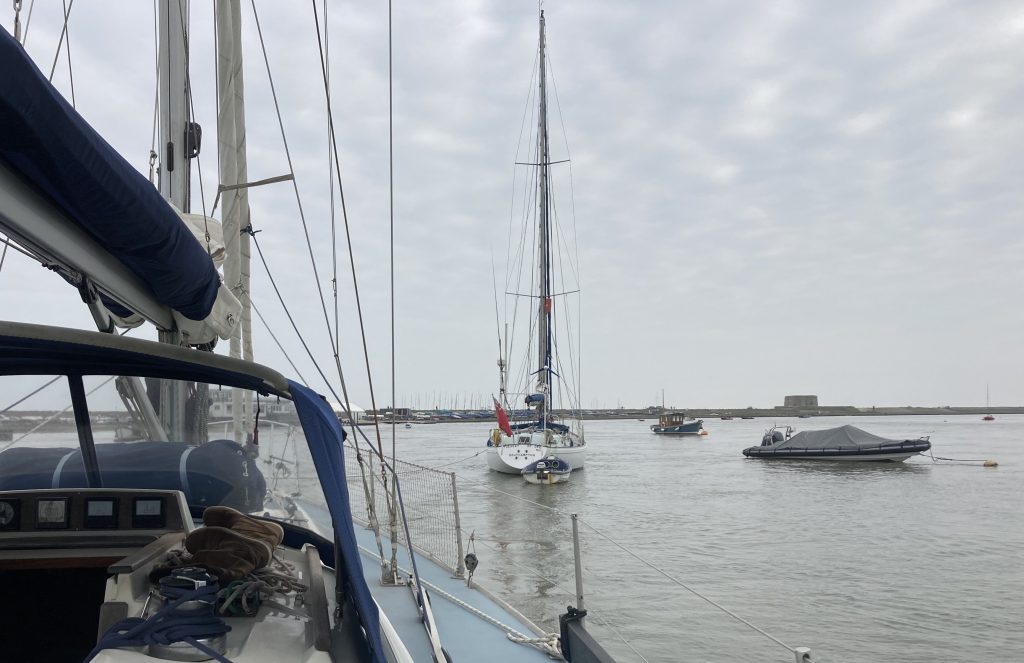 2nd May River Alde off Aldeburgh YC being towed by ‘Tuesday’. 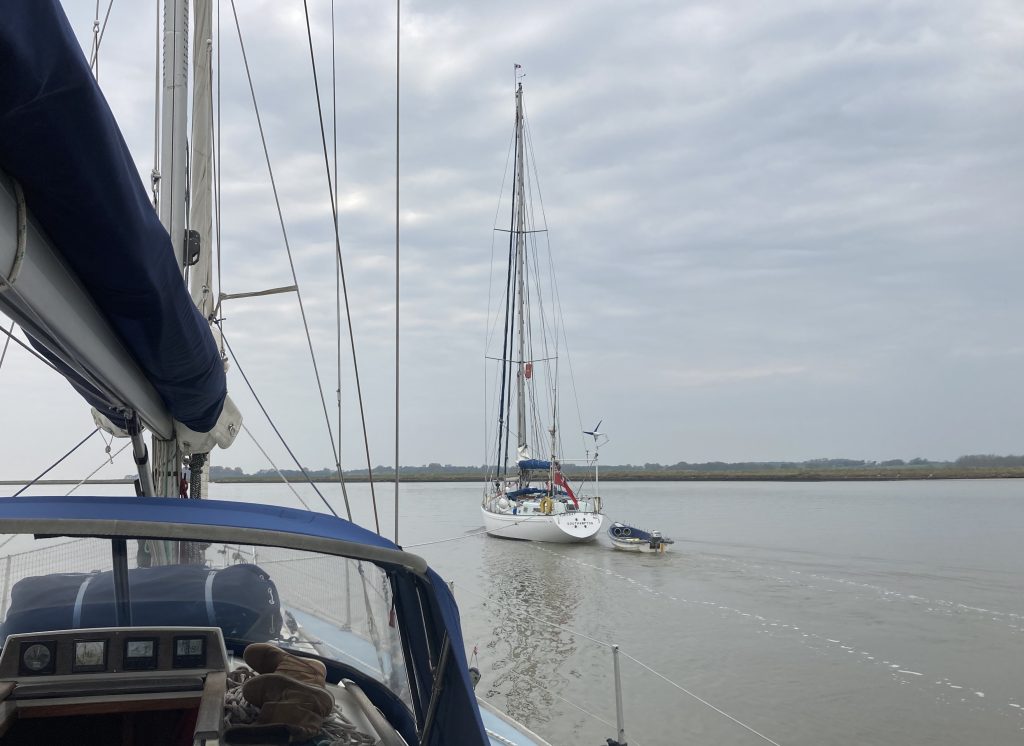 2nd May Approaching Orford  … under tow …

It had to be the lift pump!  A few days later I installed a new lift pump and bled the system before turning the engine over.

The engine simply would not fire.

The engine had eaten part of the mesh.

To cut a long story short my friend Peter Buchan came out to the mooring and removed the head.  To his astonishment the cylinders and pistons were undamaged but the valves were completely seized.  Peter took the head home, freed the valves and miraculously reported back that they too, were undamaged.

Peter recommended that with the head off, it would be unbusinesslike not to change the leaky injector sleeves and also have the injectors checked.  My still being engineless today is the result of a lack of new injector nozzles anywhere in Europe.  Peter finally found some in Canada and we are awaiting delivery.

It’s not been a bad thing, in my current state of health, to be using ‘Talisker 1’ as a house boat.  And is there a better spot than Orford on the longest day of the year? 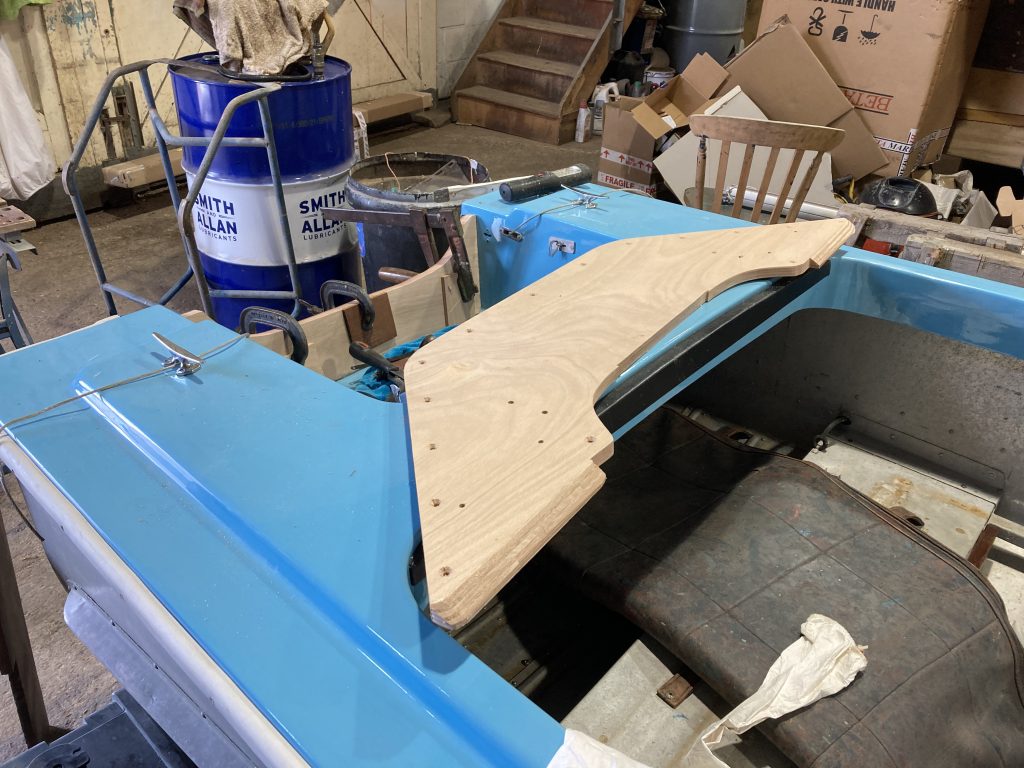 13th June. In the mean time a masterly replacement of the transom by Larkman’s Limited on my classic Pearly Miss Speed Boat that has been in the family since new. Circa 1960 London Boat Show. 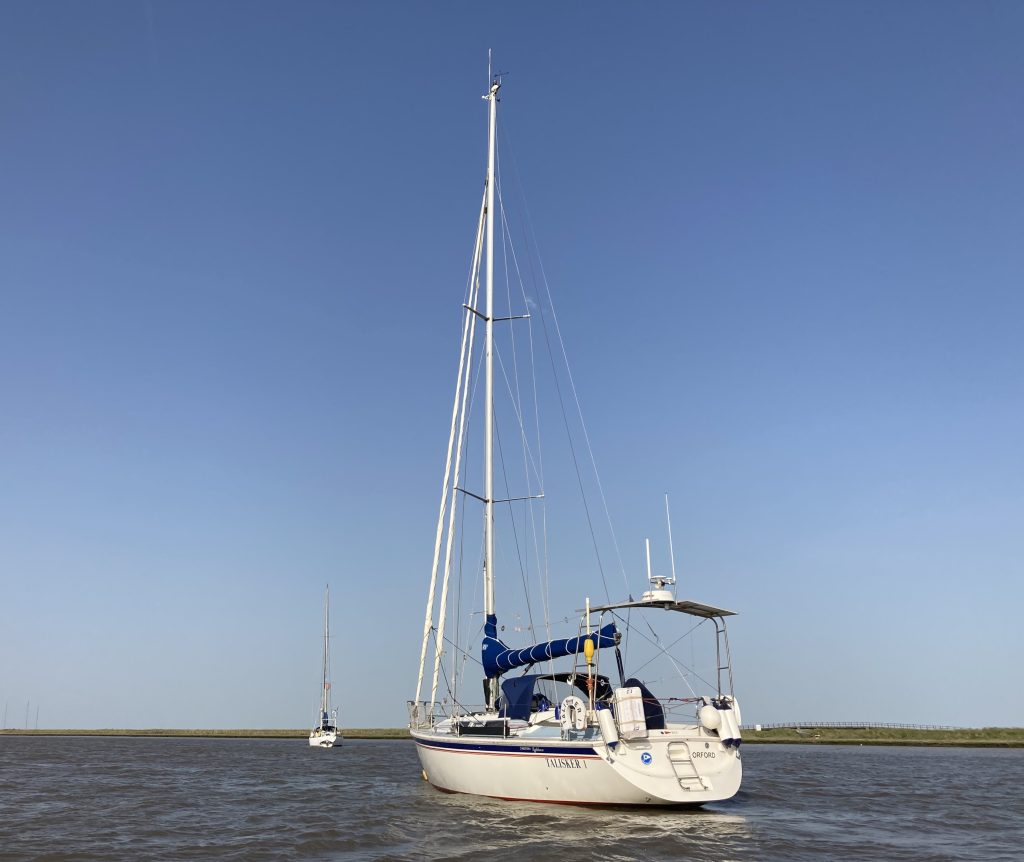 17th June ‘Talisker 1’ with ‘Tuesday of Ore’ on her mooring with Doc’s tender lying astern. 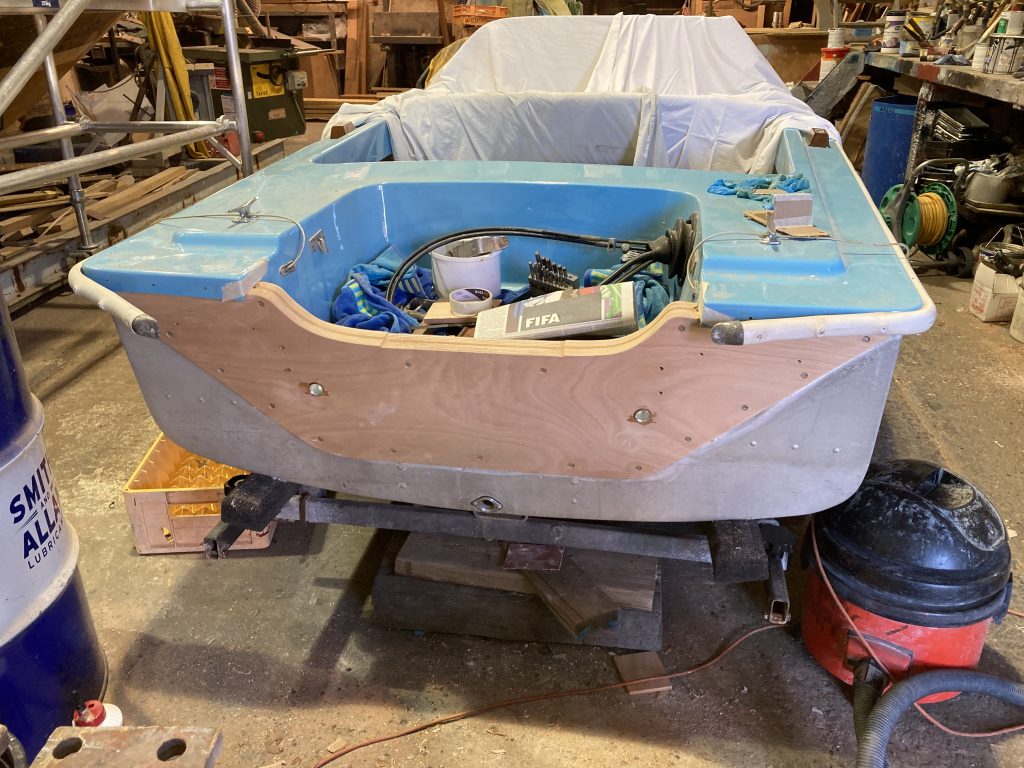 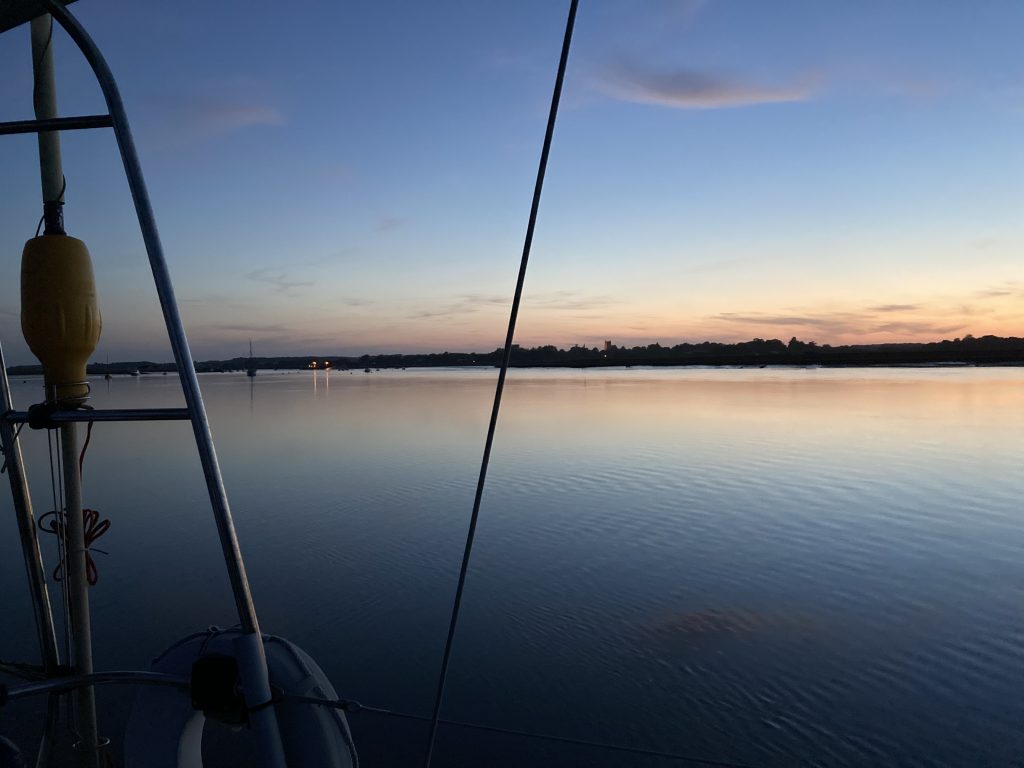 20th June a night on board … the beauty of Orford 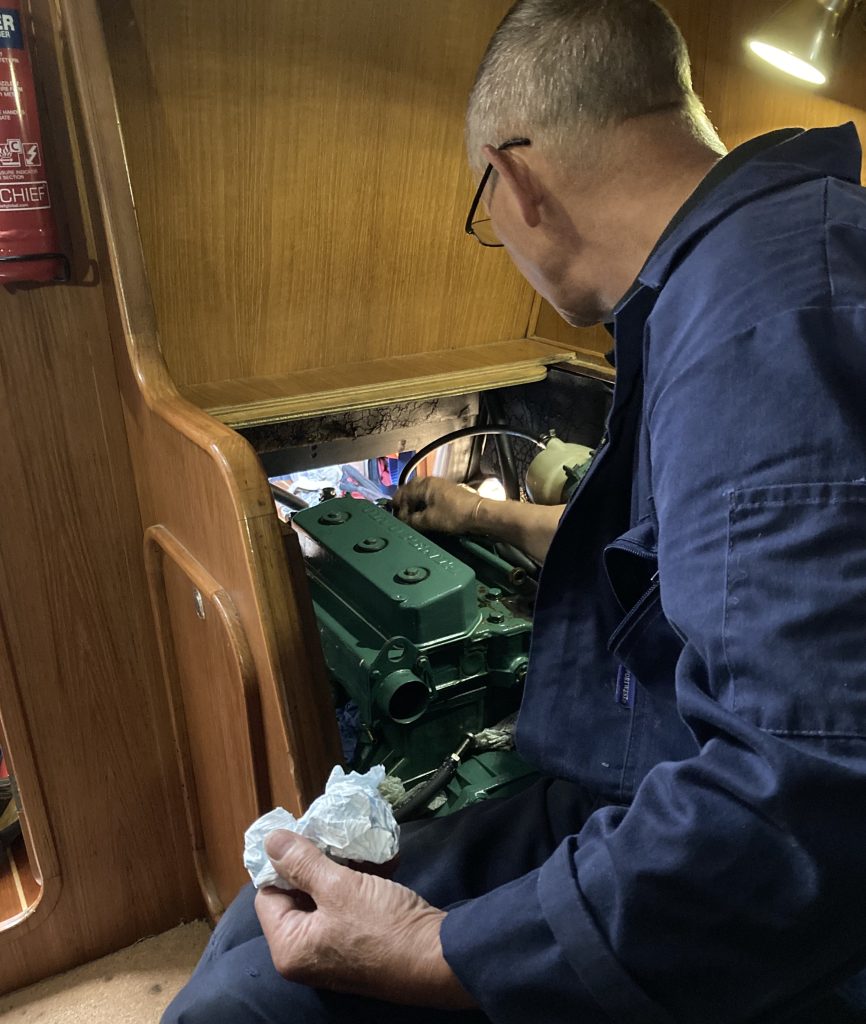 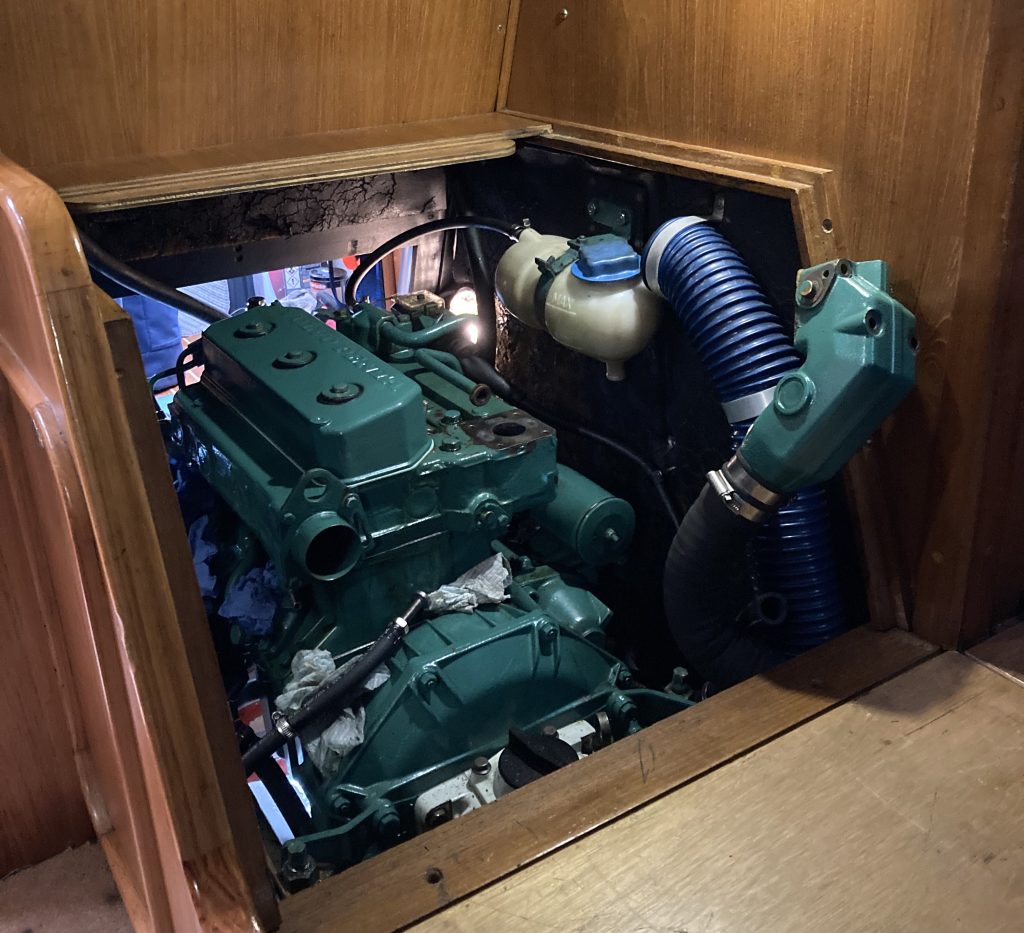 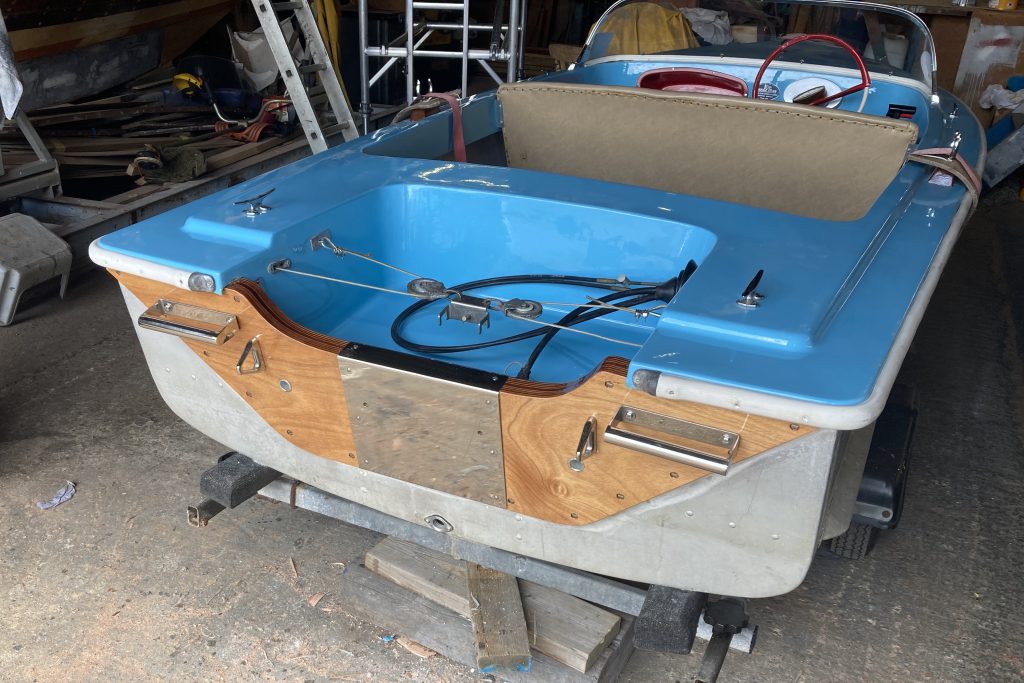 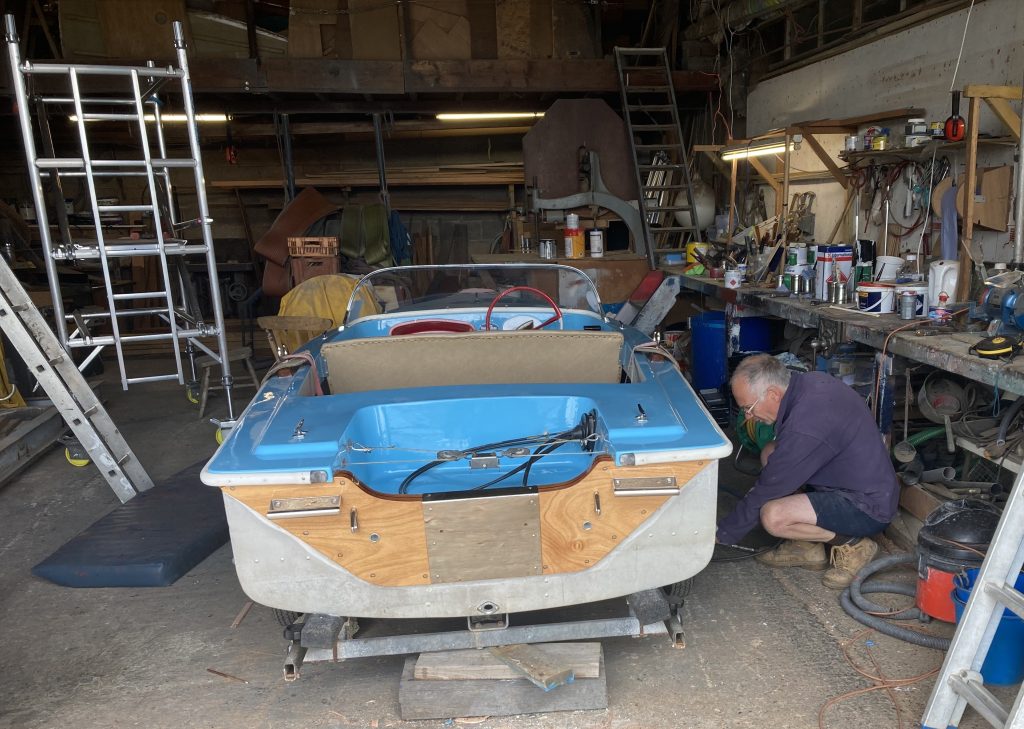 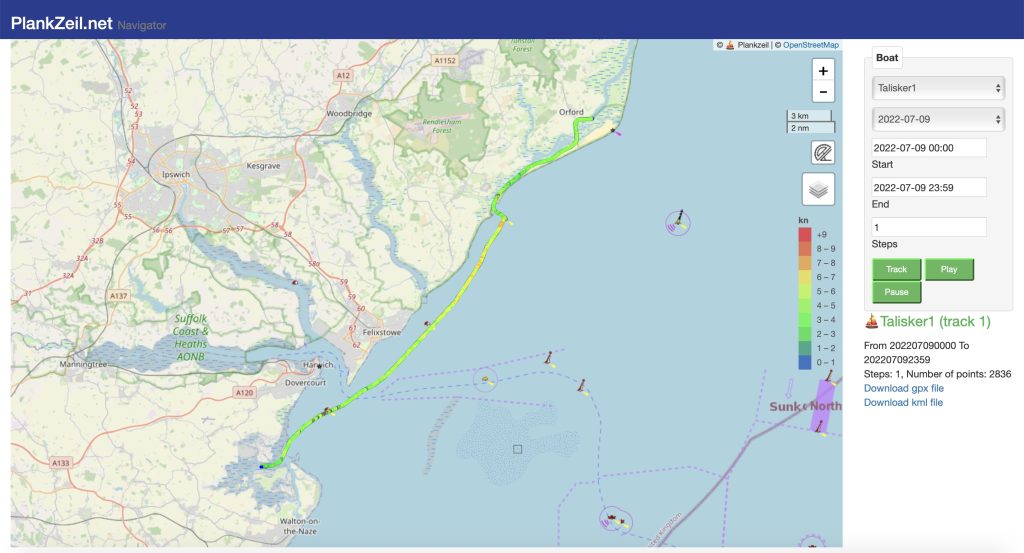 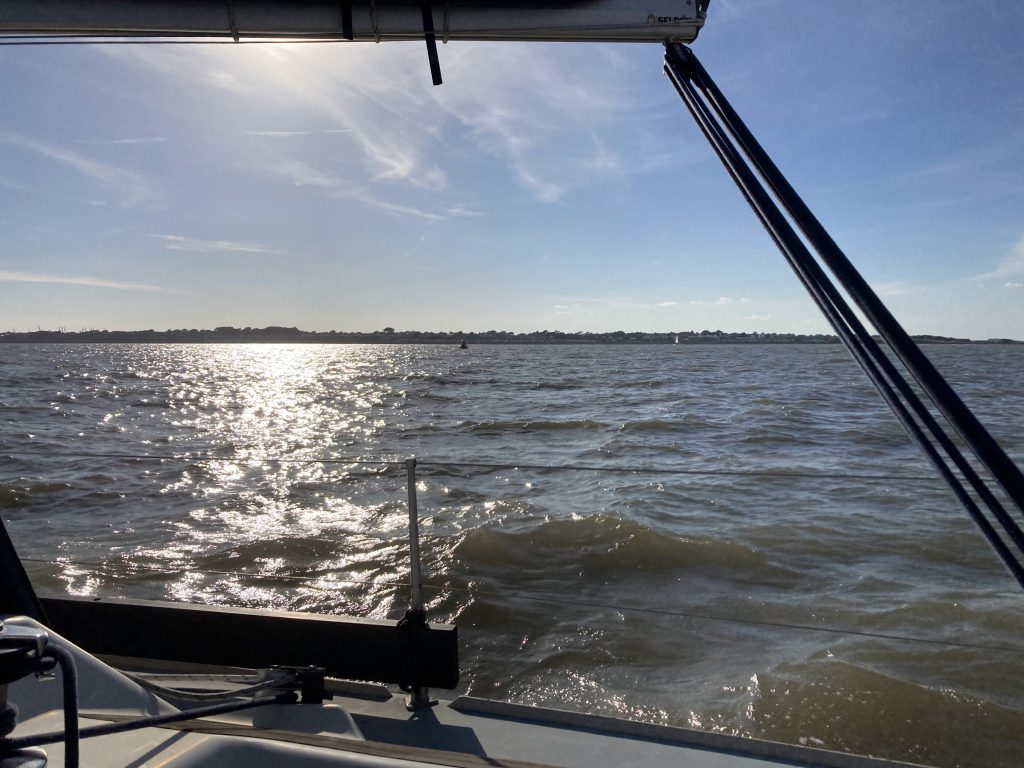 9th July …At sea again off Bawdsey and my first Solo Sail since my Total Heart Block in November. 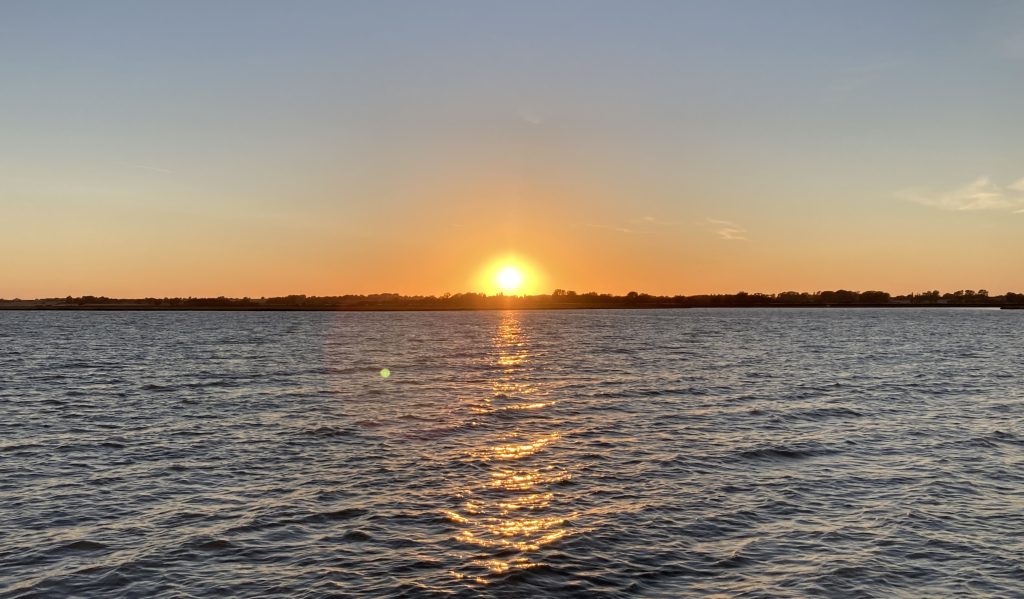 We are at anchor in Hamford Water having sailed out of the river last night.  A heat wave is expected.  There is not a cloud in the sky.  Later today we return to Orford on the evening flood. 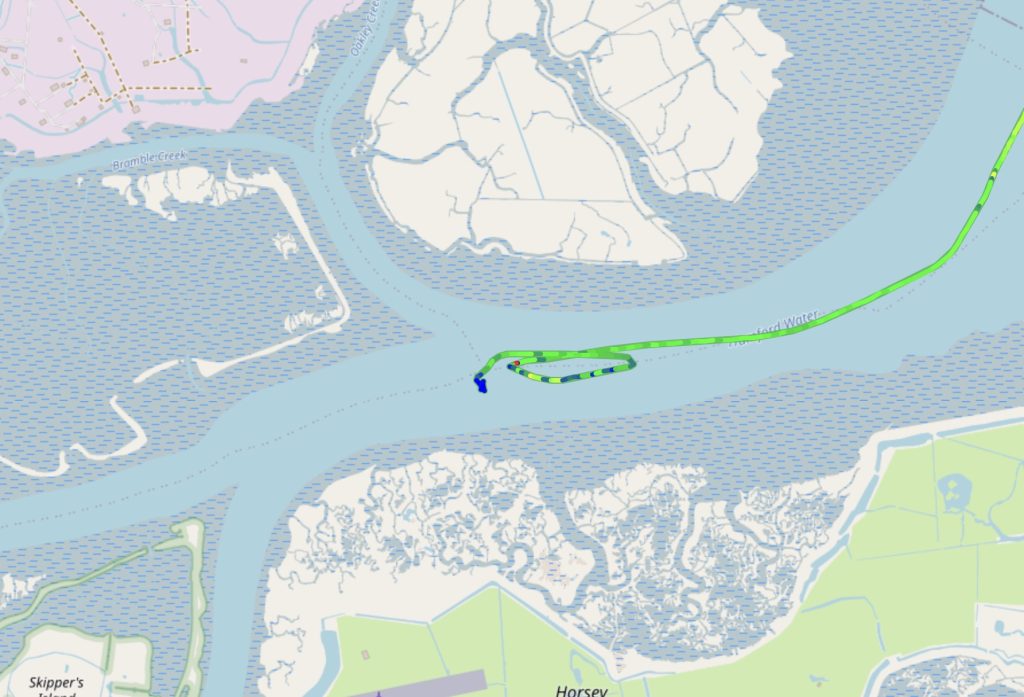 At anchor in Hamford Water 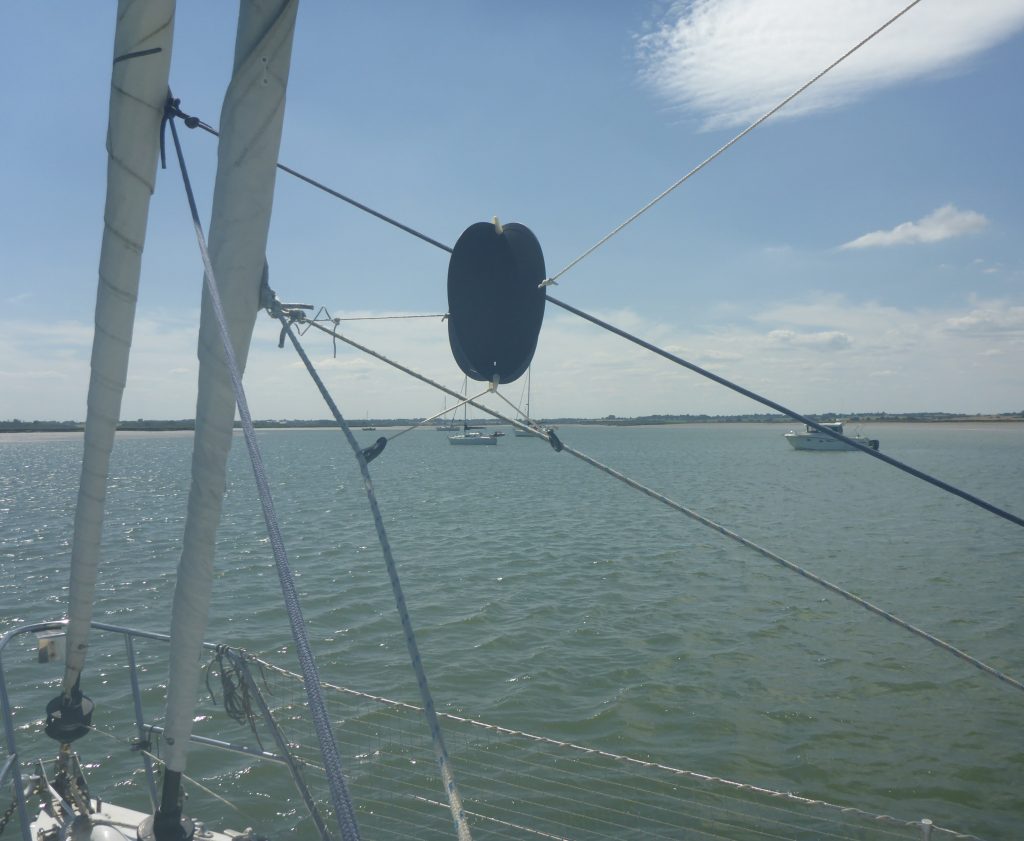 The engine was immaculately put back together by Peter Buchan.  It was not by any means straight forward.  Tiny copper washers had to be used to get a good seal on the newly calibrated injectors.

Having run the engine for two hours yesterday, predominantly to get out of the river, I checked the levels this morning and the engine bay was virtually spotless.  The 2003 is a notoriously mucky engine but I’ve never seen virtually nothing under the engine before.

We stayed an extra night in Hamford Water and returned to Orford early on the 11th. 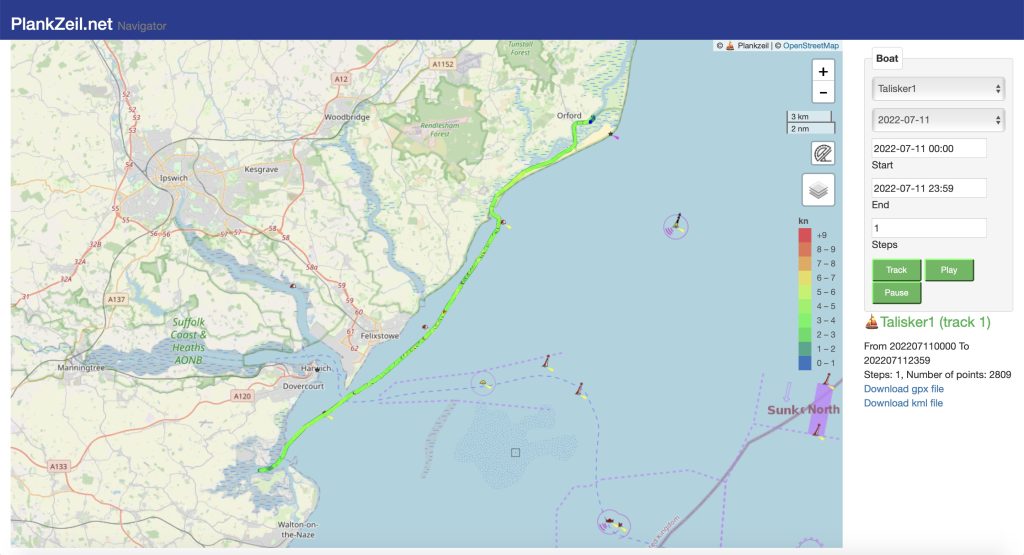 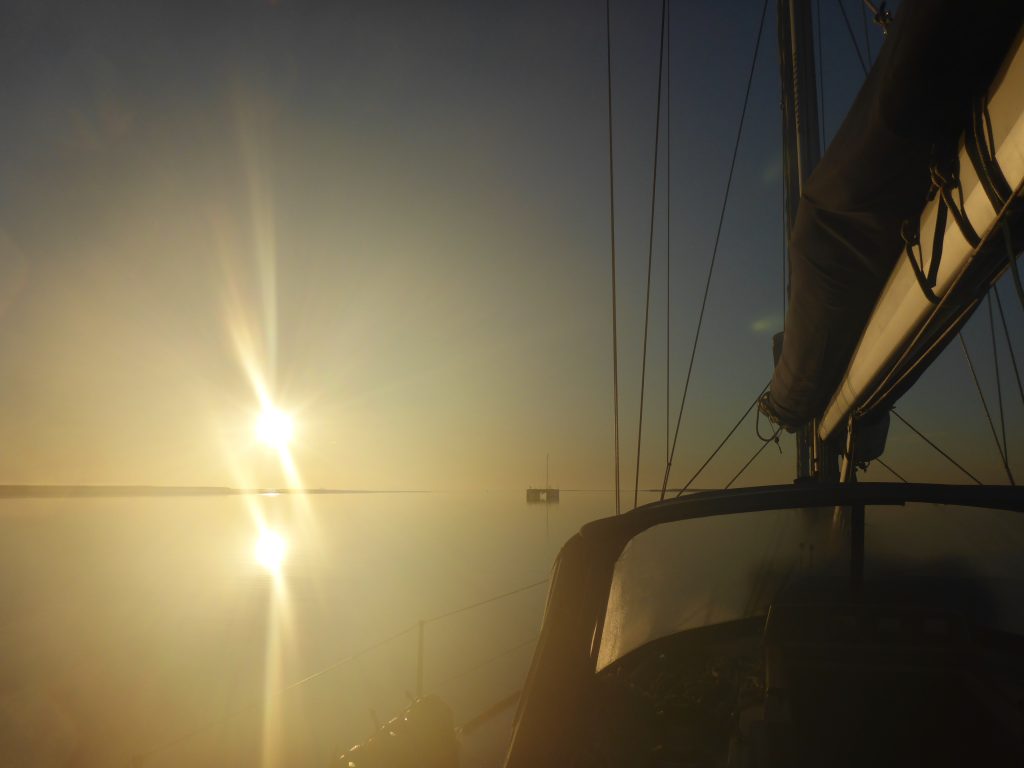 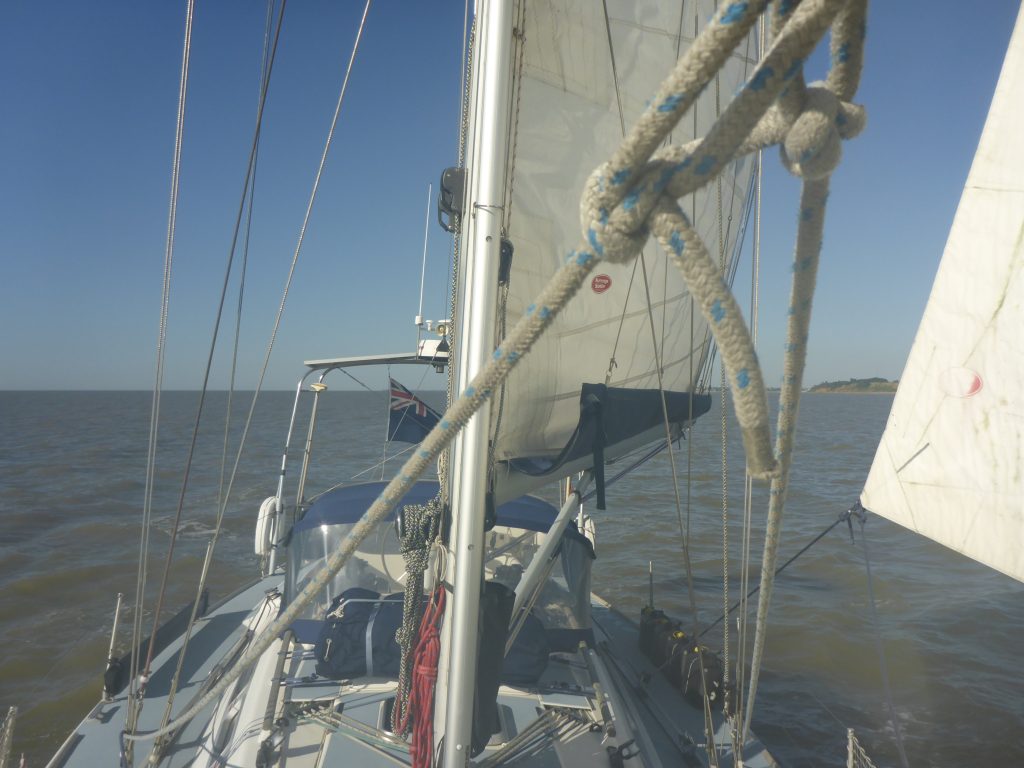 11th July sailing back to Orford from Hamford Water … the joy.

There was not a lot of wind but ‘Talisker 1’ made good progress with barely 7 knots over the deck.  I feel we are in good shape.  I have great confidence in the repair to the engine.

I can’t wait to get out there again. 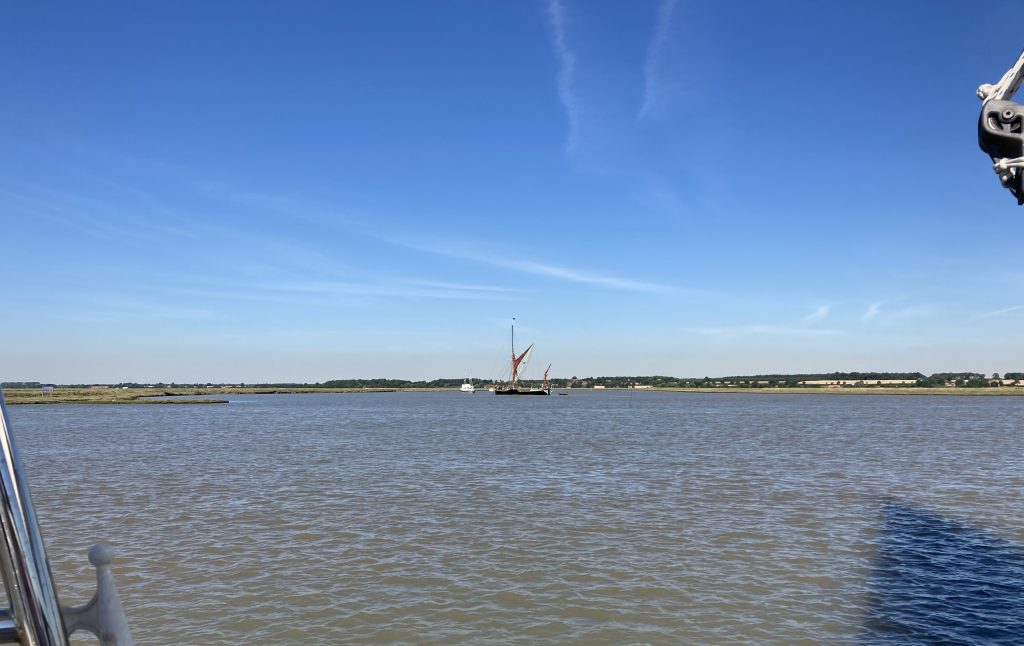 11th July Thames Barge ‘Thalatta’ at anchor in Short Gull as we come in to the moorings at Orford.