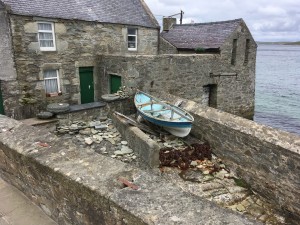 The wooden boat building facility in the Lerwick Museum 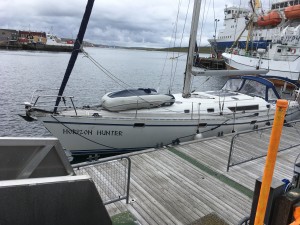 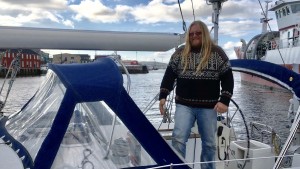 Geir being told to ‘git outa town’ by David and Candy! 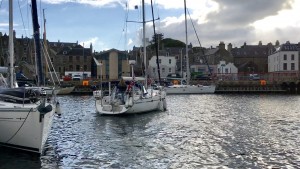 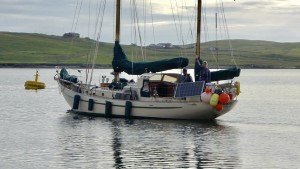 We left Lerwick the day before yesterday and were moored engine off Bergen Seilforening yesterday evening at 1720 BST. 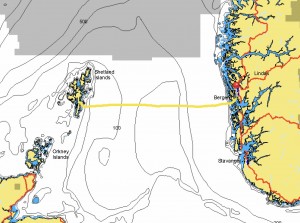 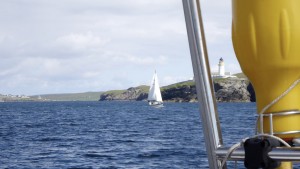 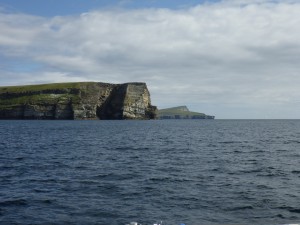 We started the engine at 0920 BST and having spoken to Lerwick Harbour for permission to get underway to the south we sailed slowly out of the harbour in light northerly winds. We were in the lee of the land having cleared the entrance and slowly sailed SE to clear Bressay. 3 NM SSE of Bard Head we set a course due E for Bergen and were fairly close hauled on port in flat seas making about 6 knots through the water.

I was expecting the wind to build from the north and north west with maximum wind speeds of about 20 knots nearing the Norwegian coast.

For much of the afternoon the wind was variable in strength but with night approaching I slipped a reef in the main at 2100 (more businesslike than any actual need at that point), furled the genoa and set the stay sail. 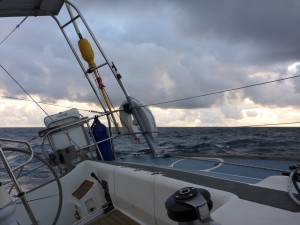 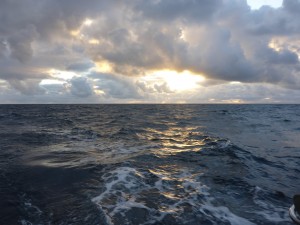 45 minutes later a second reef went in the main as the wind had increased. The day had been lovely with blue skies, but it was fast becoming overcast. By midnight the wind was a NW5 and in the very few hours of twilight, with daylight throughout to the north, the wind continued to build accompanied by an uncomfortable sea state. 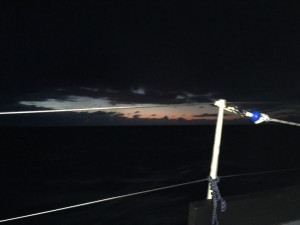 At 0545 I put some charge in to the batteries as the autohelm was working very hard. The sea had slowly gone from moderate to rough.

At 0600 I remarked in the log that the seas were tricky. I had not managed my sleeping very well in the uncomfortable seas and I was getting cold. I had to get in to the aft cabin and get some thermals. By the time I had them out and on and was dressed again I felt sick. I went in to the cockpit, wretched once or twice and that was it. The sickness quickly passed. We were just under a hundred miles from land in both directions so this was no time to feel under the weather.

At 0840 the batteries were charged and with the solar panels kicking in, even with the overcast, I switched the engine off.

The next six hours were pretty tough. The seas and wind just got bigger. The wind was blowing a fairly consistent 25 knots, gusting 30 +. The seas were confused but the main swell was from the NW that occasionally towered over ‘Talisker 1’s’ stern. More and more often her stern was thrown to starboard and the autohelm was hard over trying to make the correction too late. Later I steered by hand and although this made the motion much more comfortable I was struggling with fatigue. 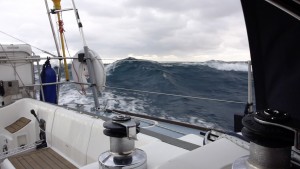 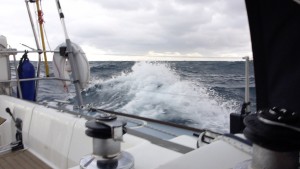 A vessel called up and asked my intentions. I had not seen the tow, signals or lights (I don’t think there were any lights). Not knowing our friend was a tow I requested ‘as the stand on vessel’ to maintain my course and speed. The sharp reply of ‘negative’ put me in my place. He was the stand on vessel but nonetheless told me he was altering course to pass astern of us. I had seen practically no traffic at all. 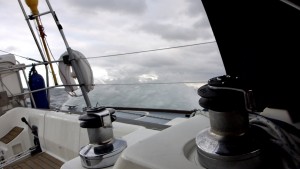 The occasional wave sucks in a vacuum of momentary silence, like a giant holding its breath, before rearing up and exhaling a crescendo of noise as the top of the wave breaks and ‘Talisker 1’s’ stern starts to lift, the helmsman corrects and the wave charges past with the boat having been high on the crest, then drops down the back of the wave in to the trough as the next wave towers up behind and prepares the next onslaught.

The wave as it passes ahead is like the back of the heads of closely packed knights on horseback in a charge. The back almost smooth, the front of their heads decorated in white spume showing the enemy their colours. It’s relentless and unstoppable. No fancy wind instrument is necessary as this sound boat will speak and tell you everything you need to know. And on and on it goes. It is the waves that always rule… never the wind. 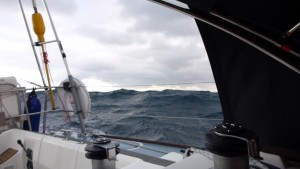 Didn’t the forecast say the winds would be moderating. Ahhh …. that was a little later in the afternoon. The forecast did not say that the weather would be like this either. Thank goodness the entrances on this slowly approaching lee shore are very wide and very very deep.

There are ships to avoid. I am given instruction to maintain course and speed. In these conditions it would be tough to alter course. We try to heave too to rest but the boat is hardly any more comfortable. The waves are steep and I’m tired.

Finally there is land but this will only make the wind accelerate off the Norwegian coast.

Little by little the land gets clearer from being at first grey to becoming very slowly more colourful and then there is sunshine which makes one feel brighter! The sea turns from a forbidding grey to a sparkling blue. It’s amazing how uplifting just that change of colour can be.

We can now see the lighthouses of the Marstein entrance. Little by little they grow in size. We are now only two NM from drawing them abreast. The waves and wind continue to toss us about but we are nearly there. 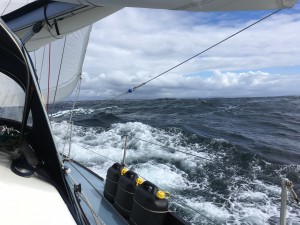 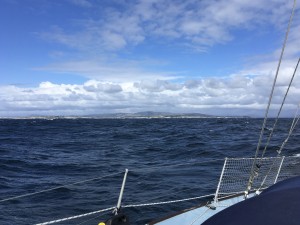 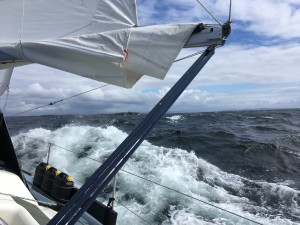 And then in bright sunshine the lighthouses come abreast and the fjord with small white caps opens up ahead of us. It’s 1440 BST. Last year it was overcast so I did not see the mountains. Today it IS beautiful Norway. The scenery is stunning. 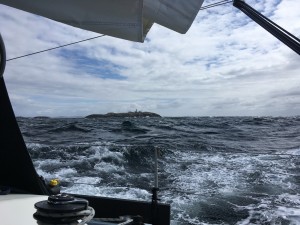 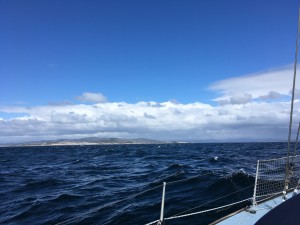 The feeling of arriving is …… wonderful. I am no longer tired as we sail up the fjord with the occasional very strong gust. I am elated! Blow wind blow! You can’t make it rough in here! The last 15 hours forgotten. It’s fabulous to arrive! I like arriving! It’s amazing as an ordinary cruising sailor to have sailed here yet again. I have not let my ship down. I have not nursed (ME) the ‘weakest link’ as well as I should have done on this passage. I must learn from this.

Texts arrive! ‘Endeavor’ have made it to Floro about the same time. They will have had a slower passage having left six hours before us.

I am typing this in Bergen Seilforening, Hjellestad. We tied up last night helped by the Irish crew of the immaculate classic yawl ‘Silence’ who had been in Lerwick. Strange how they found this, out of the way, place that is so sheltered.

Last night I showered, went to bed at 1900 having eaten a tin of mandarin segments and drunk a half litre of elderflower juice (mostly water). I got up at 1000 this morning having slept 14 hours. I’m still elated to be here. 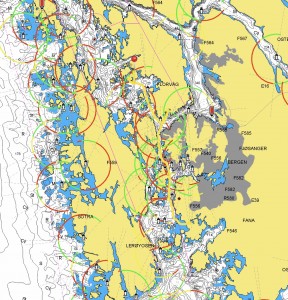 Yesterday we motored to Askoy Seilforening to join marvelous Geir and his SV ‘Horizon Hunter’. It’s his club. I have a great mooring next to Geir’s boat. 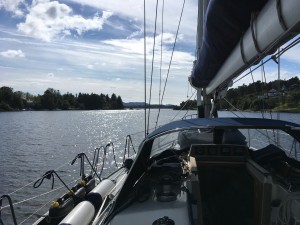 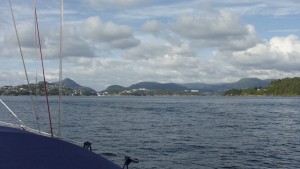 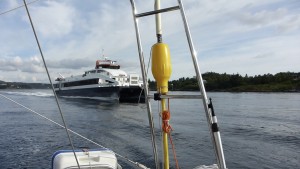 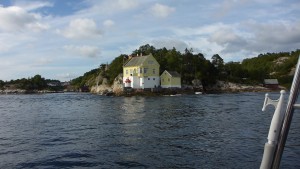 The YC was quite hard to find having looked it up in my RCC Pilot Book. It’s not where they have marked it on their small chart in the book although they do have the coordinates right. I motored to the wrong place first before finding our way here. It’s very sheltered.

Geir’s daughter Jeanette 22 has a boat which she bought in Sweden. An ‘enterprising’ young lady she motored it home round the Skaggerak from Sweden! More of that later. She says she has not hoisted the sails yet.

It is 194 NM from the southern tip of Bressay to the Marstein light houses. We sailed this distance in fifteen minutes short of 28 hours, which gave an average speed over the ground of 6.7 knots. We did touch 13.4 knots over the ground at one moment. Perhaps falling off a wave when the cooker nearly jumped out of the gimbals and I was asleep tucked behind my lee cloth starboard side.

Geir is generous and kind. We have much to talk about! He has a high achieving autistic son.

Yesterday he laid on a huge plate of fried eggs, beautiful fresh bread, jams and juices. Last night his wife Irene brought a huge quantity of prawns and Norwegian strawberries. Today is the first day of her holiday!  She is as generous and kind as her husband.

Yesterday evening we went for a sail in practically no wind on Jeanette’s new boat. I was very glad to show her how the main sail worked including the reefing lines. I’ve suggested that the boat and her are nowhere near an offshore passage yet. Much needs to be done to her ship and she has much knowledge to learn. But she’s a Viking with the right attitude.

I am in a quandary what to do.