We arrived from Lowestoft yesterday at 1440 after a 24H passage. 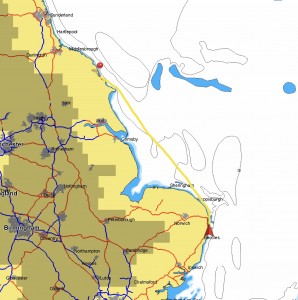 The winds were variable from Lowestoft although predominantly from the SW but gradually grew throughout yesterday morning and by the time we reached Flamborough Head it was a fairly constant 20+ knots over the deck gusting 30+. We were early for Scarborough as we would need to enter no earlier than half tide so the main came down, the genoa was furled and a small handkerchief of stay sail set to gently sail the last 16 NM in four hours.

It was an apprehensive arrival in a harbour I had only entered once before. There were no visitors spaces and the HM allocated me a berth rafted alongside a catamaran. Heavily fendered we reversed between a piling and a fishing boat and I was able to hand our stern line to Shaun. Once secure we were able to motor gently forward which brought the bow in and Kat took our bow line. We were secure.

Shortly afterwards the RNLI towed in a yacht with a broken down engine.

I’ve slept round the clock. I spent a lovely morning with Thomas and Kate and there young children Molly and Toby.

1625 and Nadal is the French Tennis Champion for the 10th time.

We left Lowestoft at 1400 BST on Friday. The visibility was very good for most of the voyage and we enjoyed a lovely sunset and sunrise. 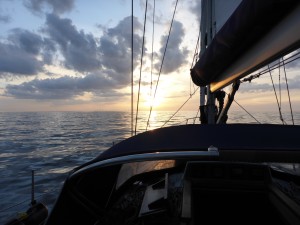 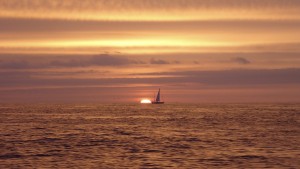 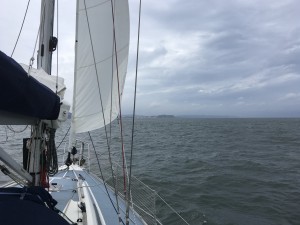 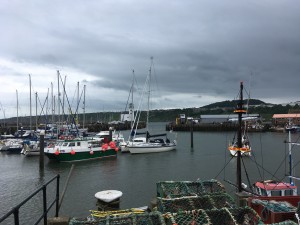 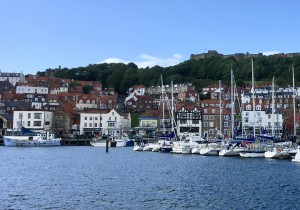 ‘Talisker 1’ rafted to the Catamaran 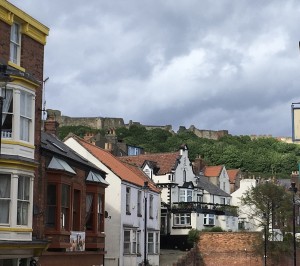 This early in the trip I was hit by fatigue but managed to sleep in short bursts under the spray hood with a timer set for five minutes. A repetitive thorough check and then a five minute sleep seemed work.

I’m pleased to get leg one out of the way.

We are in Eyemouth after another days sailing. I say sailing because from Scarborough, the thick end of 120 NM, we have run the engine for just 2.9 hours and that would have been as much tick over in Scarborough, Blyth and Eyemouth harbour’s as anything else.

The sail from Scarborough was lovely and we were able, when necessary to point higher with the stay sail than the genoa. The wind was variable in strength from the W SW. I was able to properly see the Yorkshire coast above Scarborough in clear visibility and its quite beautiful. 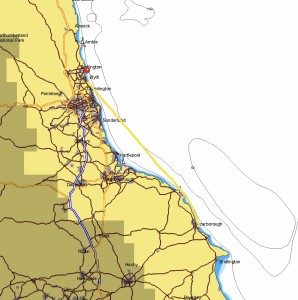 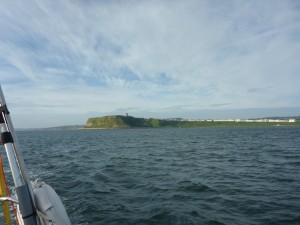 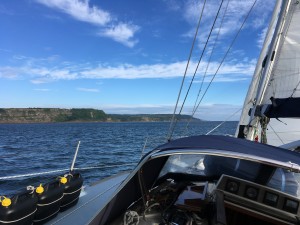 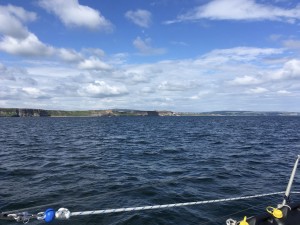 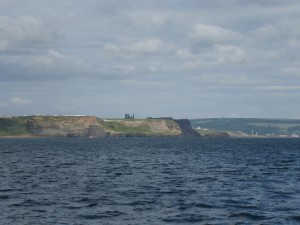 The Abbey above Whitby overlooking the North Sea 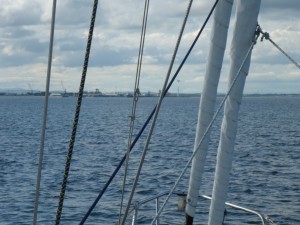 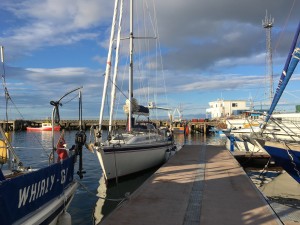 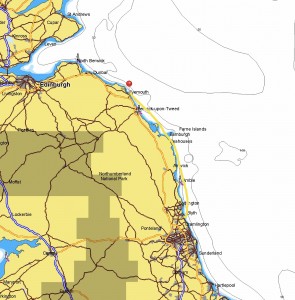 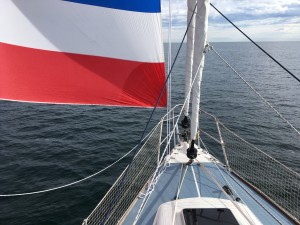 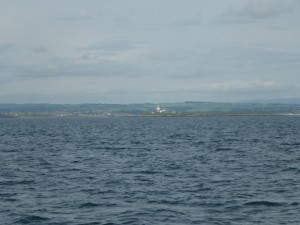 Coquet Island. Amble is behind the island … 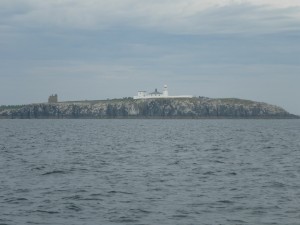 Farne Islands from Inner Sound between the mainland and the islands 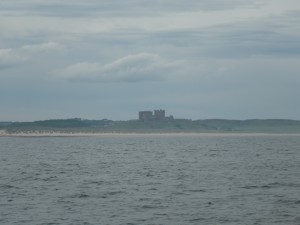 on the land side is Bamburgh Castle …

Passing through Inner Sound there was an imperceptible change in pressure and the wind increased, backing SE and I was just in time to get the chute down and stowed. The predicted SE5’s were early.

I set the genoa for the final run up a beautiful coastline to Eyemouth where Gordon HM, who kindly waited for me to arrive, met me at 1900. We are rafted to a Swedish Bavaria 49.

I’m feeling slightly better about myself and us. There is nothing like the sea for administering a vicious bite to remind one how inhospitable she can be. She has no malice but she is what she is and a reminder of the respect one must show her is no bad thing.

I had two lovely moments yesterday evening. The wind finally weakened sufficiently about a mile from the entrance to Eymouth and with engine on and genoa furled we passed a rather special Dutch sketch. Everything about her said single hander. Her name is ‘Taranis’ and she is the sister ship to ‘Joshua’, famously sailed by the late and great sailor Bernard Moitessier. I briefly chatted to her owner when he arrived but sadly he left early this morning. There is much I wanted to ask him. 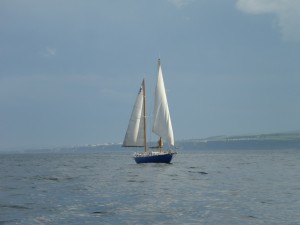 Approaching Eyemouth there was a large disturbance in the water. So much so it startled and briefly worried me. I have never seen Bottlenose Dolphins before but I have now. These were double the size of the Common Dolphins I have been lucky to see quite often. In my ignorance, at first I thought they were small whales or even Orca but their dorsal fins should have counted that out. 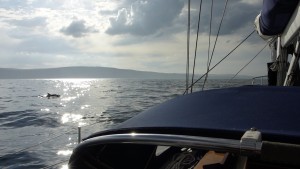 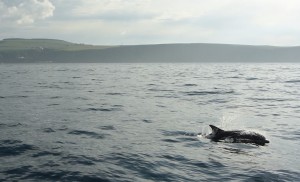 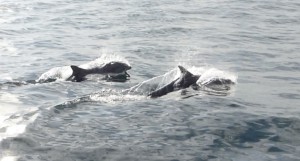 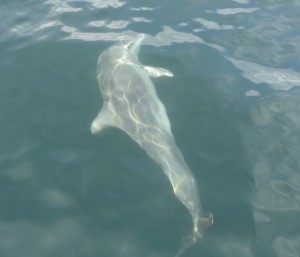 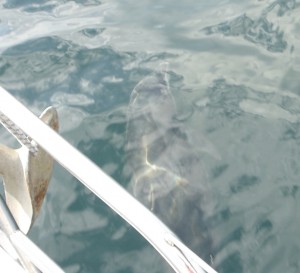 Anyway! I loved seeing them. Of course the water is deeper up here and as much as I love our muddy seas in our part of the world there is something to be said for translucent water. 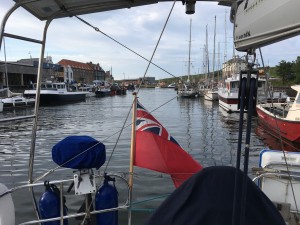 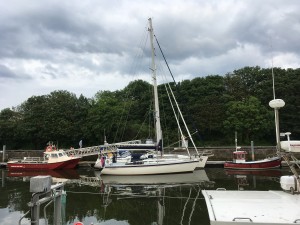