The joy of being underway again after the winter.

Not far!  Yesterday afternoon we left Suffolk Yacht Harbour, our winter umbrella, and sailed under main only, in to the River Stour. 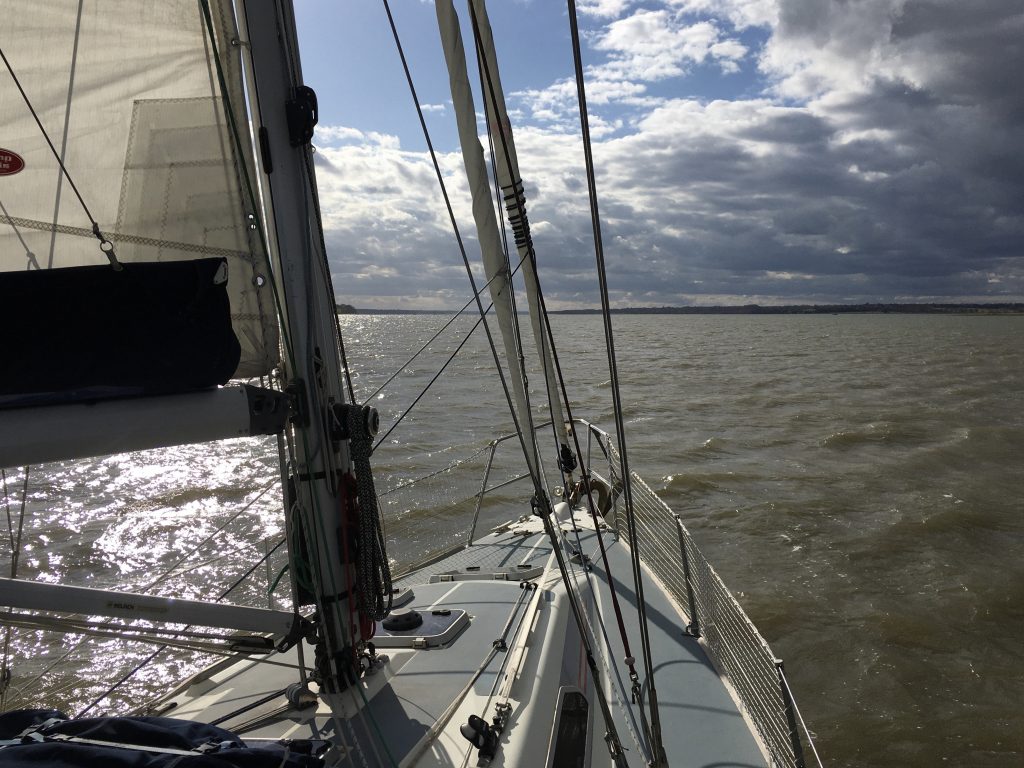 Heading up The Stour 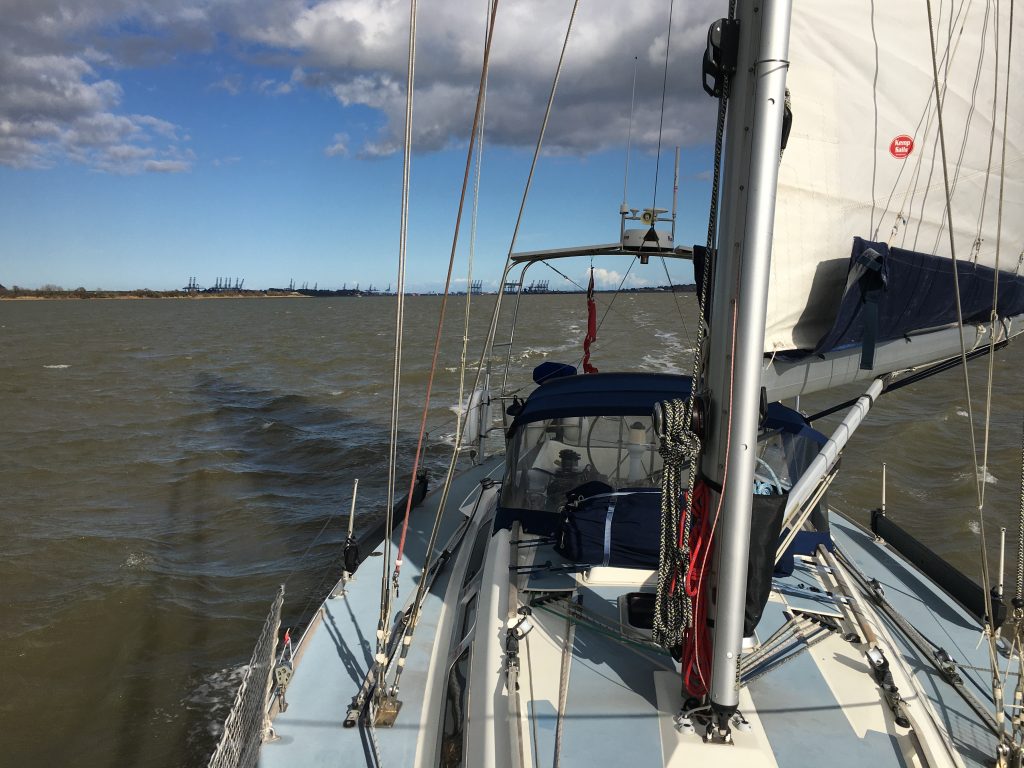 Winds were easterly backing northerly in the evening and overnight so we anchored in a favourite spot.  We are tucked in to the bank in Erwarton Bay. 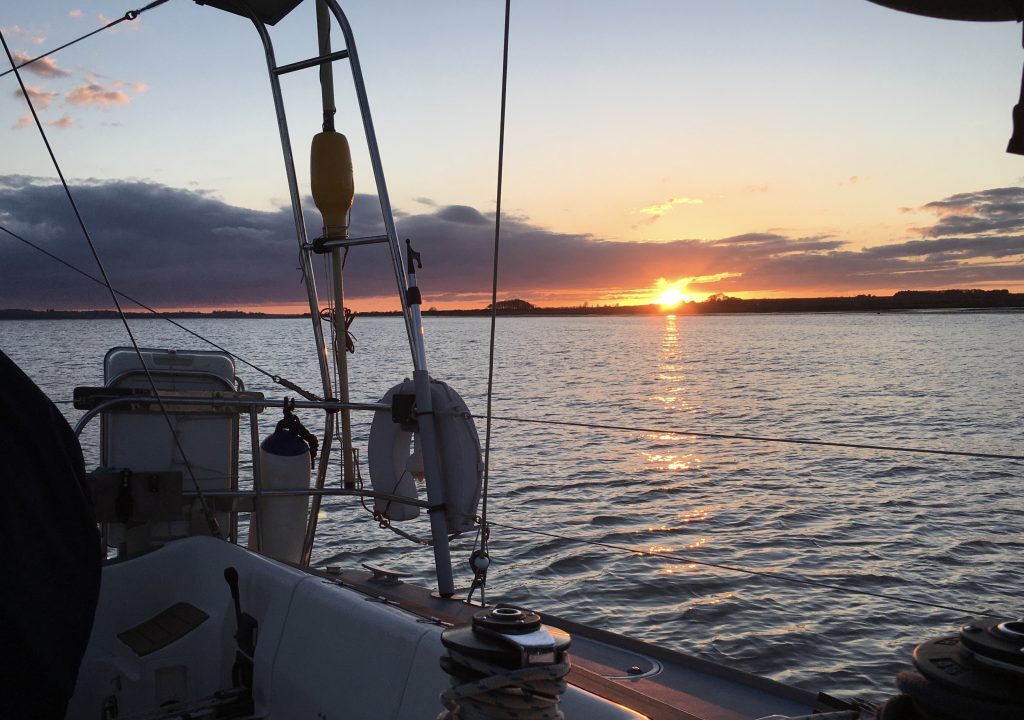 Tucked in to the bank Erwarton Bay

Anchor watch and a favourite spot to anchor in Northerlies

We will stay here until tomorrow morning before sailing to our home port of Orford.

I was able to get the winter work done in a brisk, solid two to three weeks.  The boat gets longer each year or is it the years catching up on me? 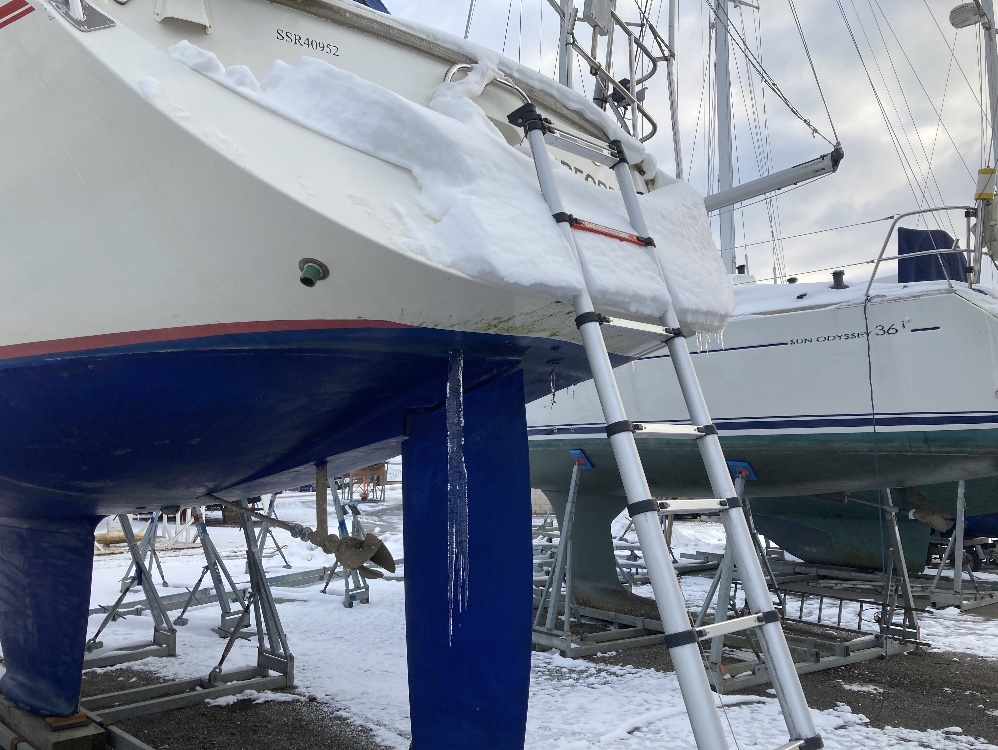 10th February. Photo by Olly Ballam who kindly kept an eye on ‘Talisker 1’ during lockdown 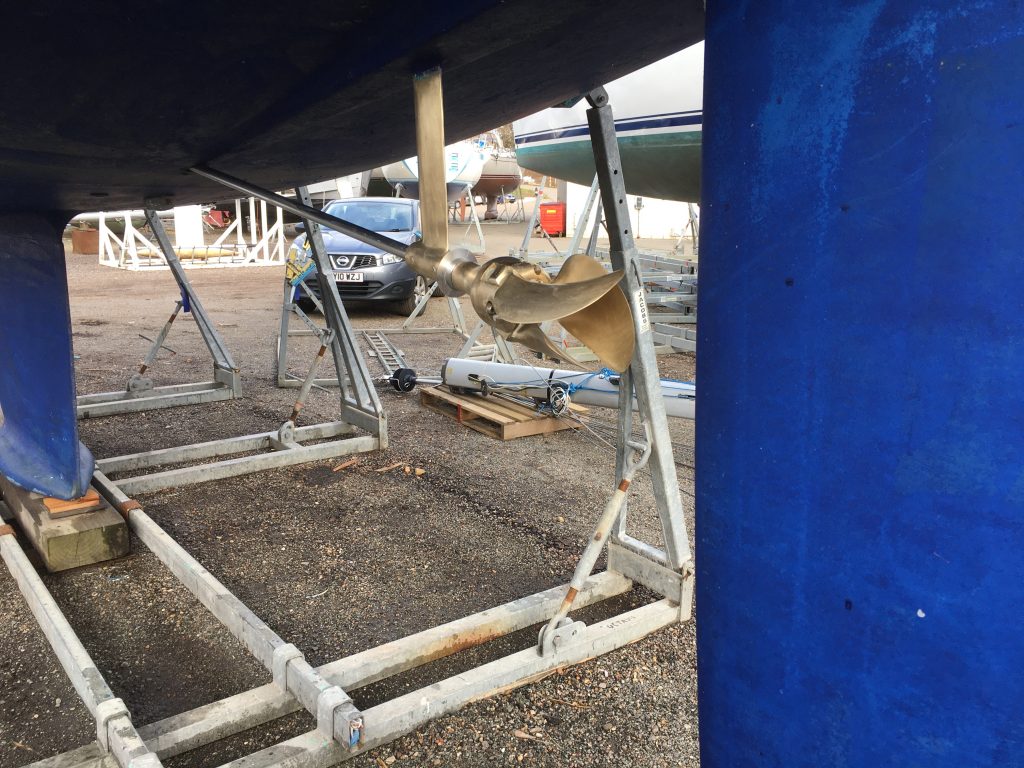 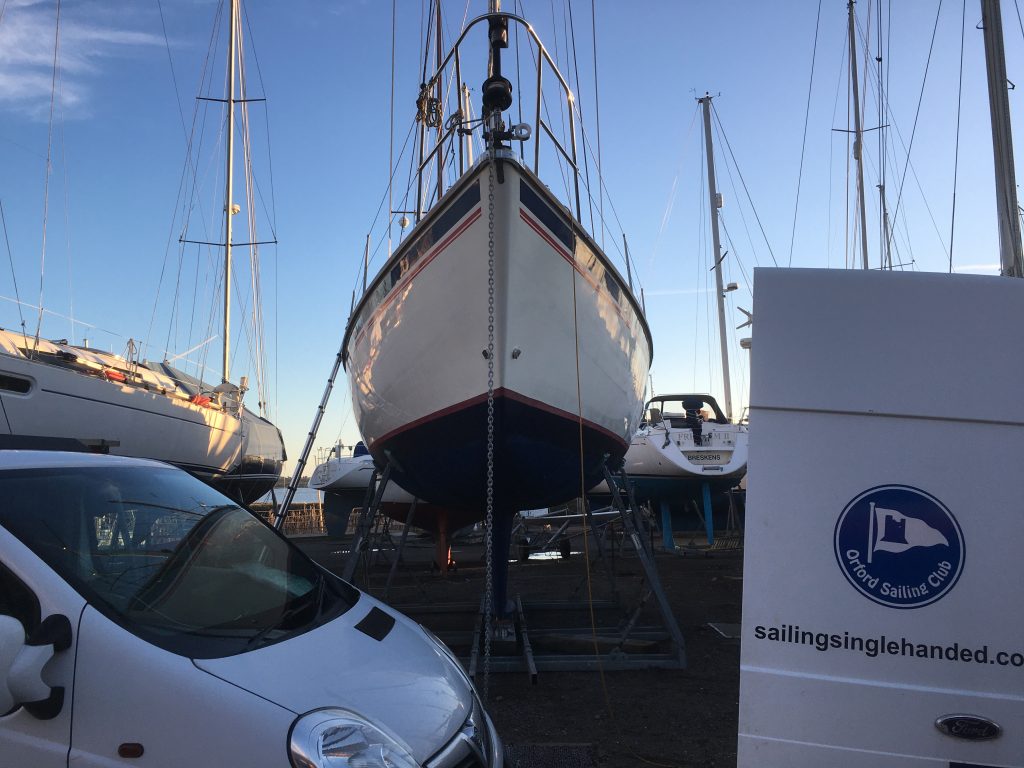 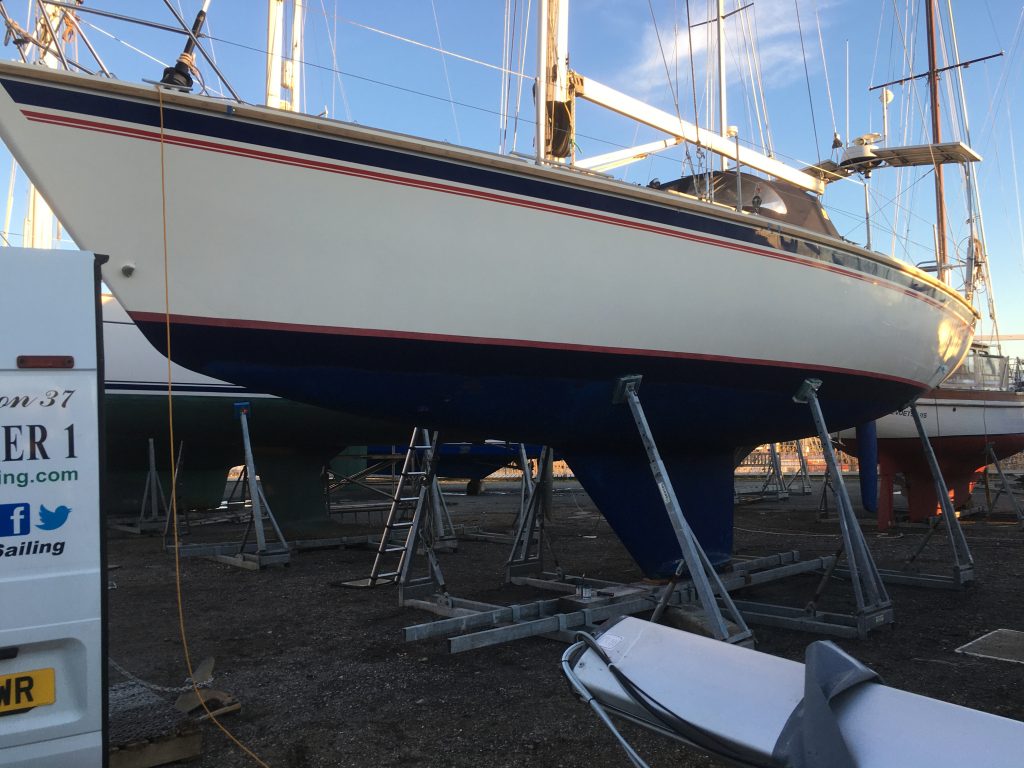 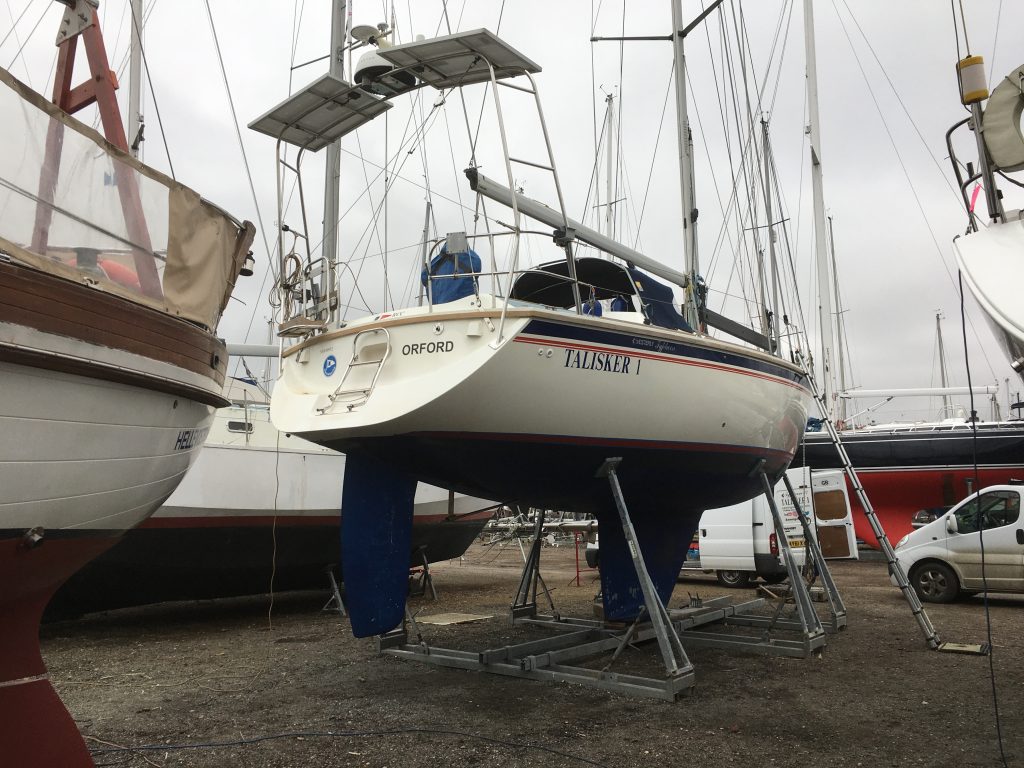 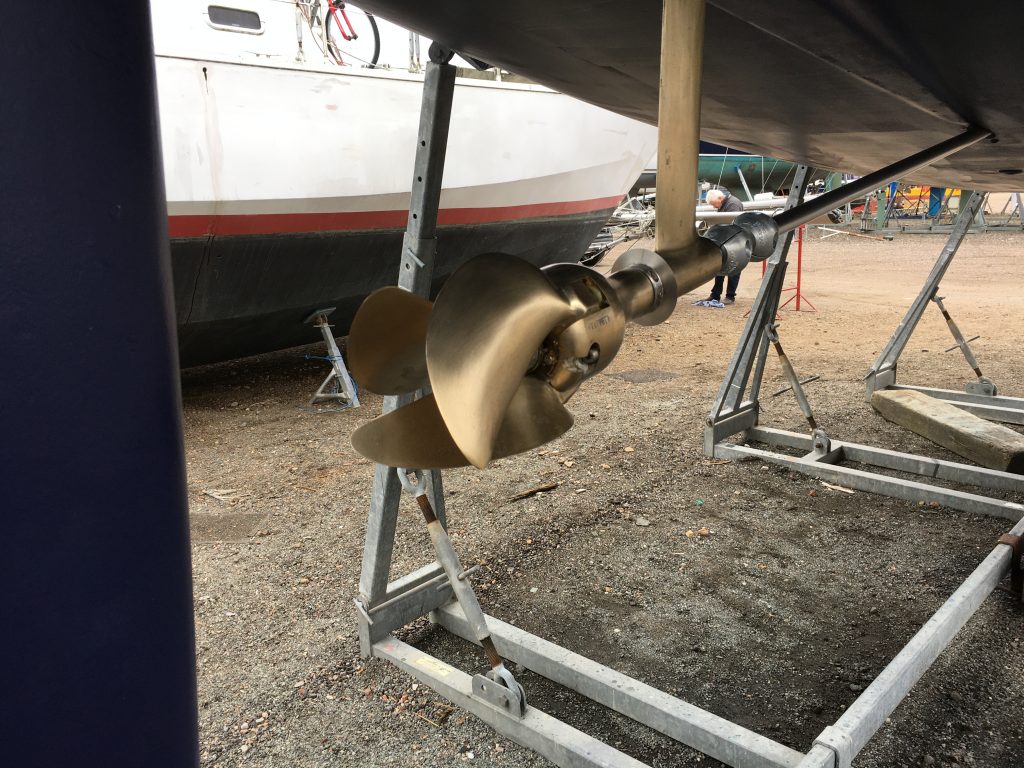 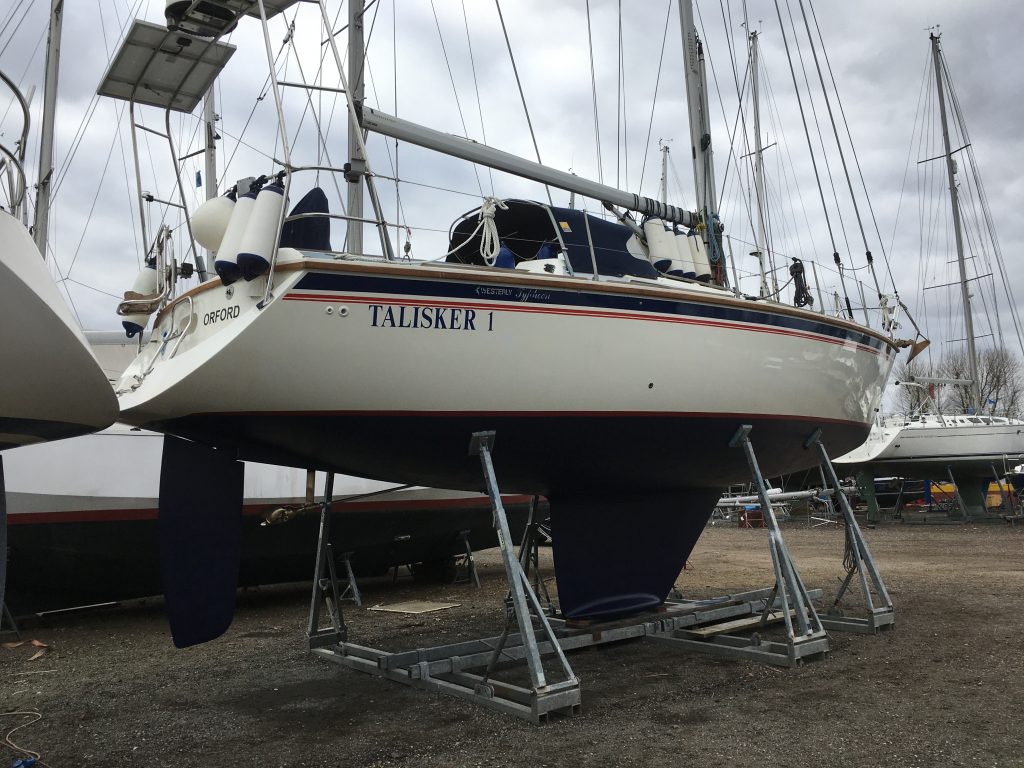 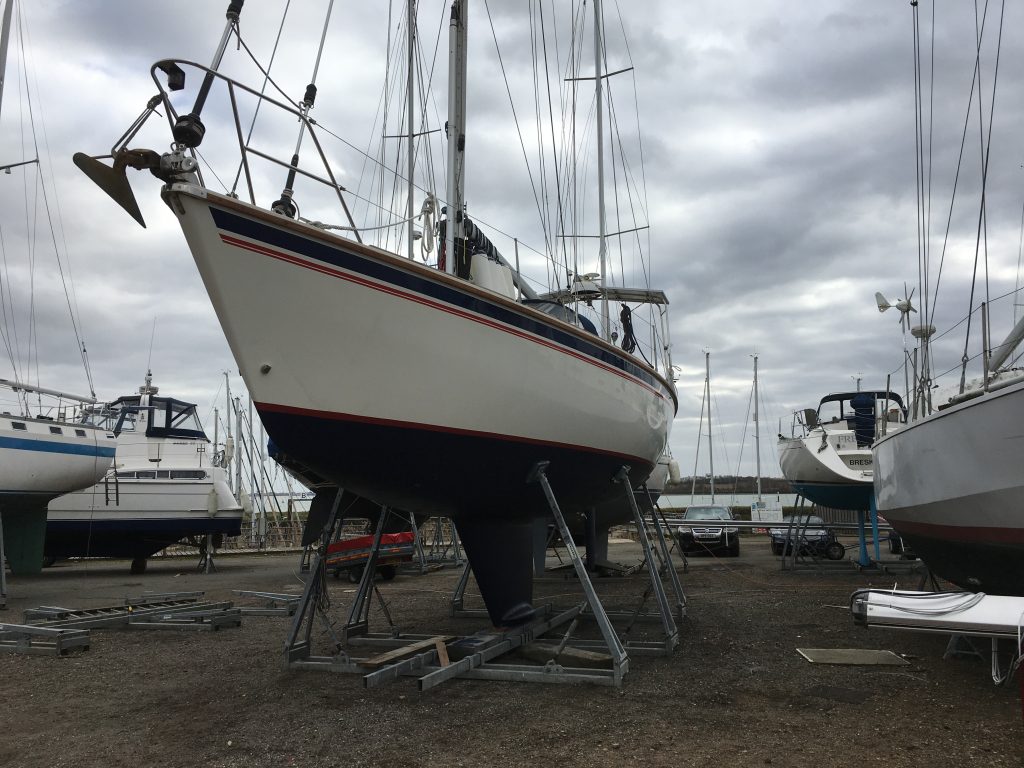 My cutlass bearing needed replacing again after only two seasons.  My engineer friend and fellow single hander, Peter Buchan, noticed that the shaft was not lined up with the P bracket.  It was too low!  Peter felt it might be possible to line it all up.  You have to line up the stern gland, the through hull bearing AND the cutlass bearing.  After an awful lot of work Peter concluded that the cutlass bearing did not line up with the other two.  And almost certainly never has, since she was built 29 years ago.

There is also a new phenomenon that could cause my cutlass bearing to wear so quickly.  Molluscs. My shaft gets turned frequently as I use the boat often.  Those boats on a mooring in the Ore and Alde that might not get used quite so frequently are now growing molluscs that might, when well established, rip in to the bearing when the shaft is turned.  Nonetheless, they may still be the cause of my cutlass bearing wearing so quickly.  The molluscs are also growing on our mooring strops and their razor sharp shells are cutting the lines.  The joy for James Robinson when servicing the moorings at the end of each winter was the muscles attached to the mooring lines.  For the last couple of years the muscles have gone and the Molluscs appear to have taken their place!  Are they connected?

The recent and terrifying Panorama programme on our rivers is just one of many problems facing the world.  The Alde and the Ore are, according to the Environment Agency, one of the cleaner rivers in the country.  Is it really so clean?  The behaviour of certain water companies is a disgrace.

As a young boy I spent my time fishing rivers, ponds and lakes in Buckinghamshire and Oxfordshire.  I found peace from school, as an eleven to fourteen year old, fishing the river Thame.  I understand that life in our rivers is now threatened and species of fish and other river life are disappearing fast.  I caught so many different fish and carefully released them from the keep net when I had to trudge back across the field to school.  I have no desire to fish purely for sport now, but the idea of life disappearing from our rivers is nothing short of a scandal and a catastrophe.

On the 29th March ‘Talisker 1’ was superbly re launched by James, Oliver and Ryan at Suffolk Yacht Harbour.  Due to Covid 19 the boys towed her to a good berth. 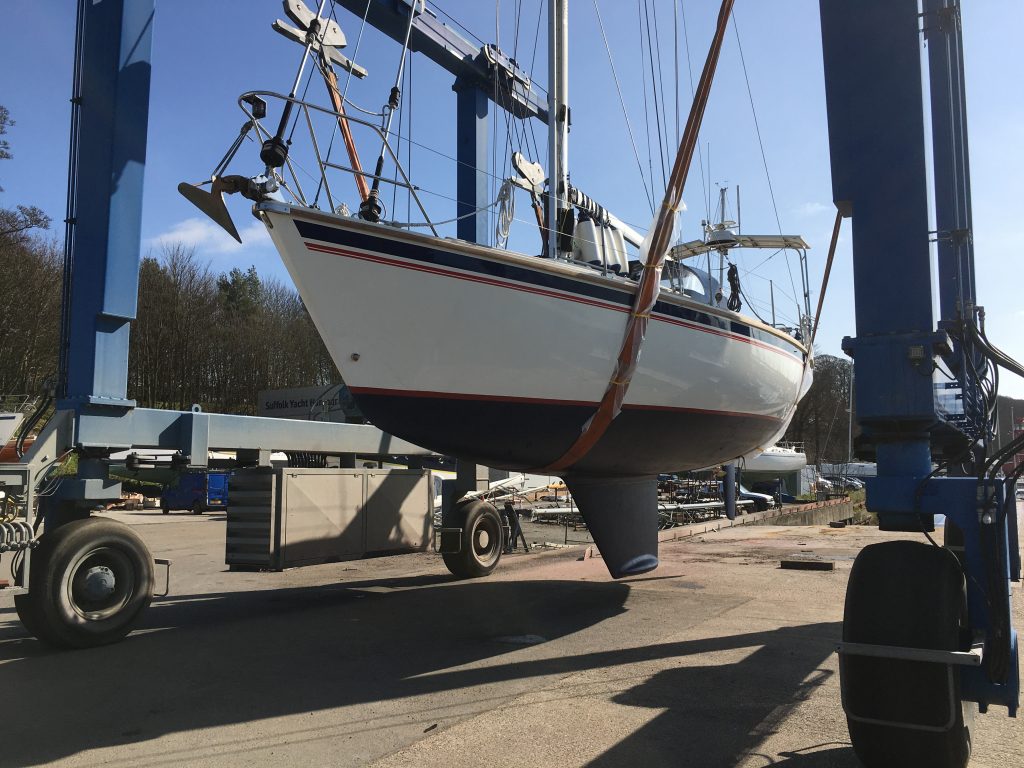 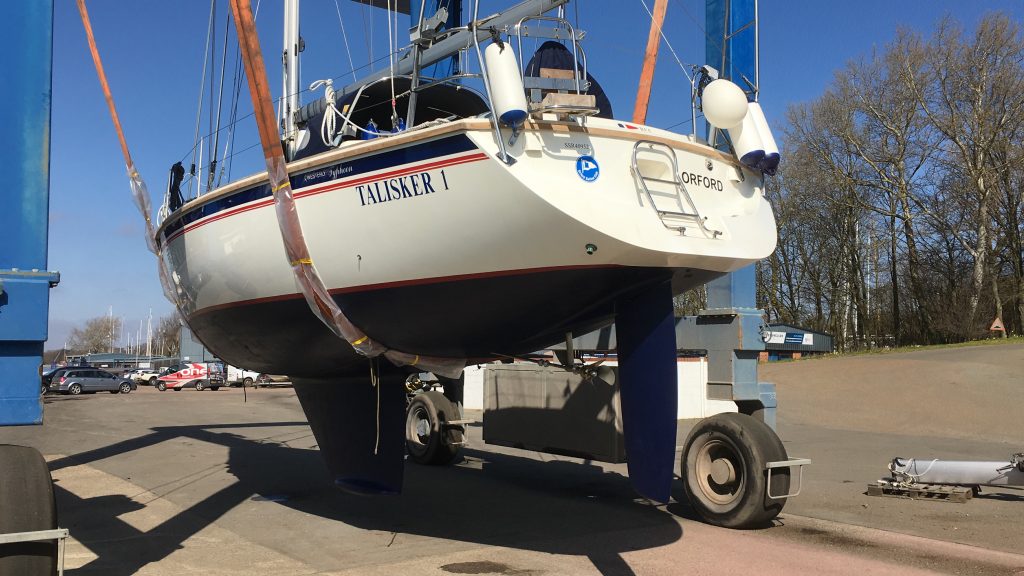 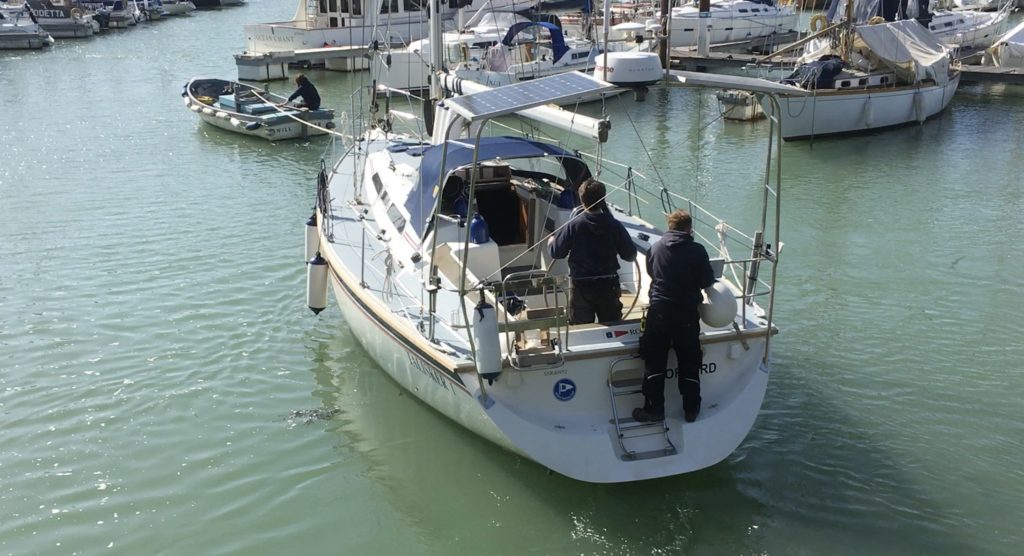 James in the work boat, his brother Oliver at the helm of ‘Talisker 1’ and Ryan on the stern 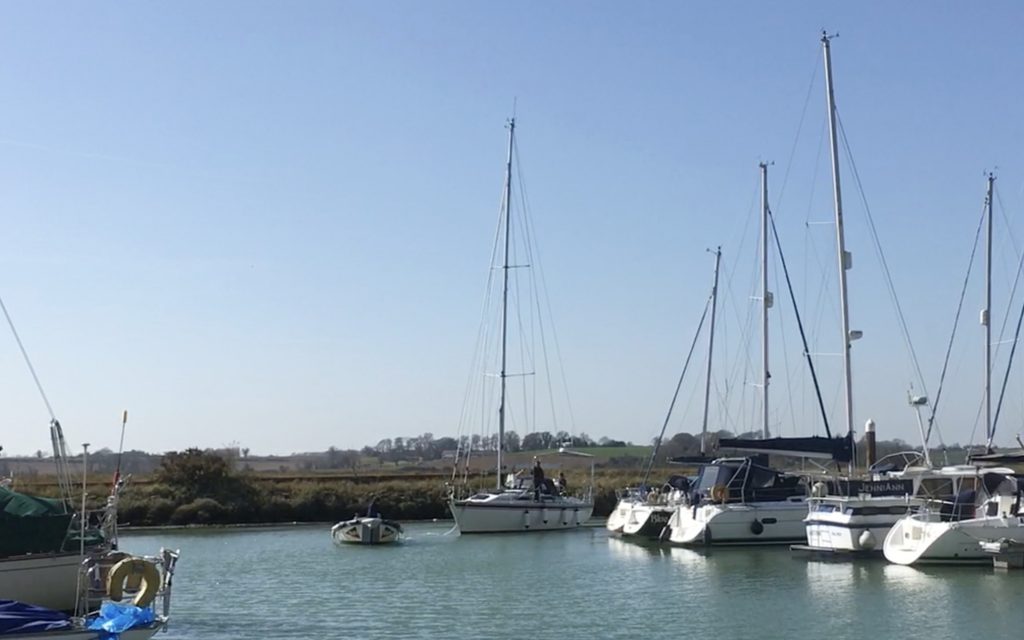 In good hands. ‘Talisker 1’ has never been moved without her owner until Covid 19

My friend Simon Abley came and helped me put the main sail back on.  I was a little slow leaving the harbour due to sciatica and a worry with the injectors.  The centre one is leaking fuel.  I will be keeping a careful eye on them. 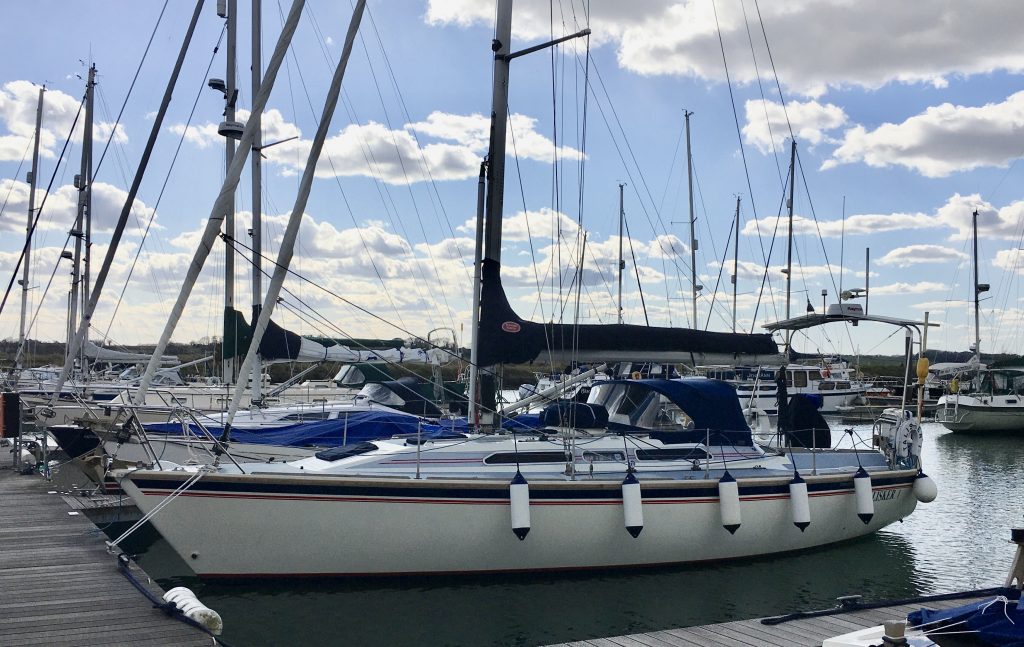 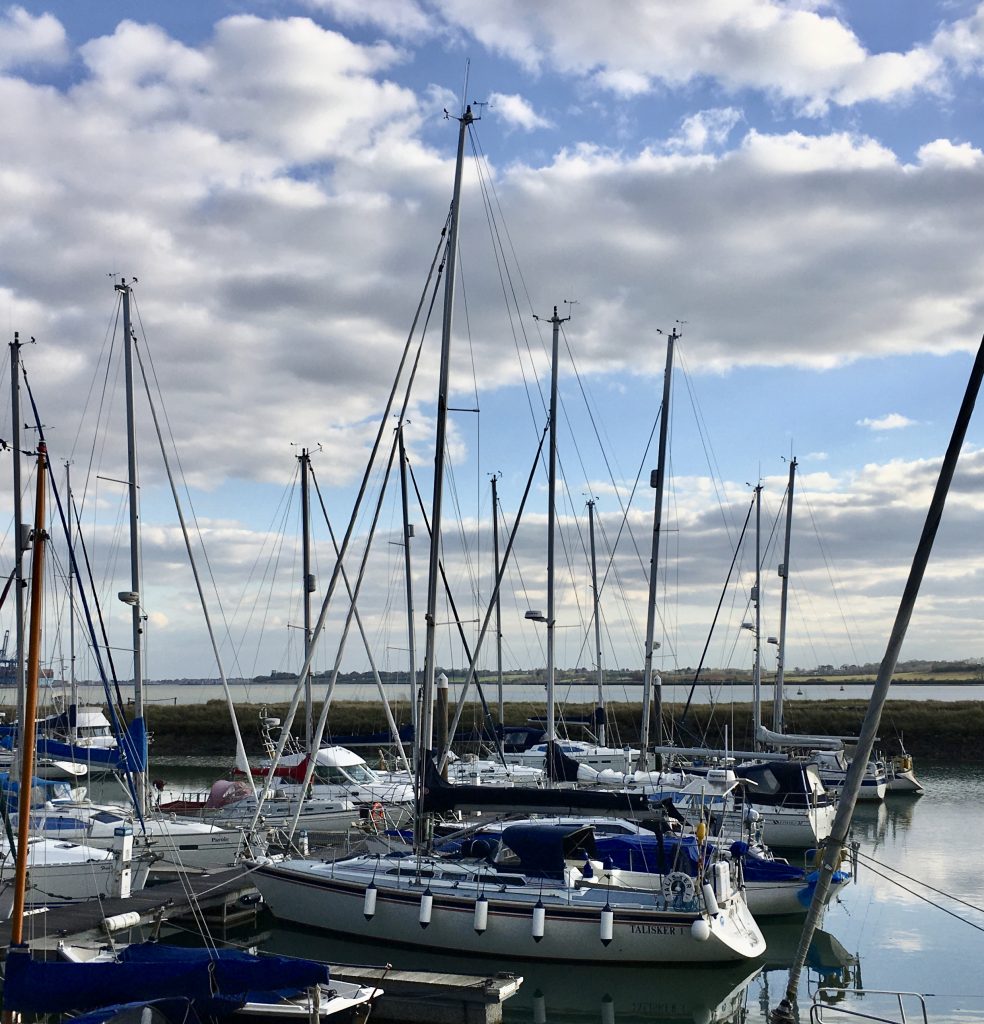 Pretty much ready to leave our winter home for the summer

I’m so thrilled to be back on the water.  Last year we did not launch until July.

Due to Covid I doubt I will leave UK waters in 2021.  Many people tell me they won’t go abroad because of Brexit.  I’m certainly not put off by formalities abroad as ‘Talisker 1’ and her crew have always been treated very well by officials both close and far from home.

I am deeply saddened by news from Kris and David aboard SV ‘Taipan’, in the Pacific but at the same time very heartened and relieved that they were so fortunate.  The sad news was David suffering a stroke.  The good news was that when David became unwell they happened to be just twenty minutes away from the biggest hospital in the Pacific, outside New Zealand, in Tahiti.  David was treated properly and quickly.  They were flown medevac the 5,000 miles to Perth and Kris tells me David is doing well.  They also say that a private jet is the only way to travel!  They plan to sail again but ‘Taipan’ will now return to Australia with a delivery crew.

A very cold beautiful day with crystal clear visibility and our first proper sail of the year back to our home port of Orford.

From Languard Point to Orford Haven it took fifteen tacks against a flood tide, in predominantly north easterly 4’s.  The flood tide was dying as we approached Orford Haven and we crossed the river bar ten minutes before HW at Orford Haven.  ‘Talisker 1’ sailed beautifully. 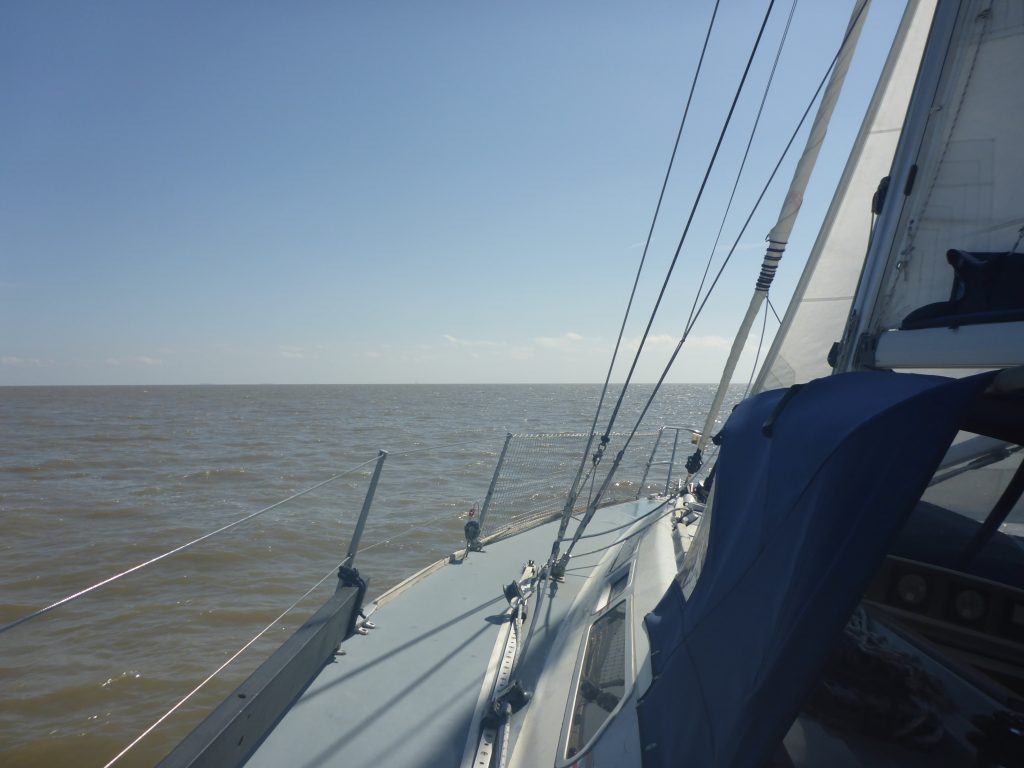 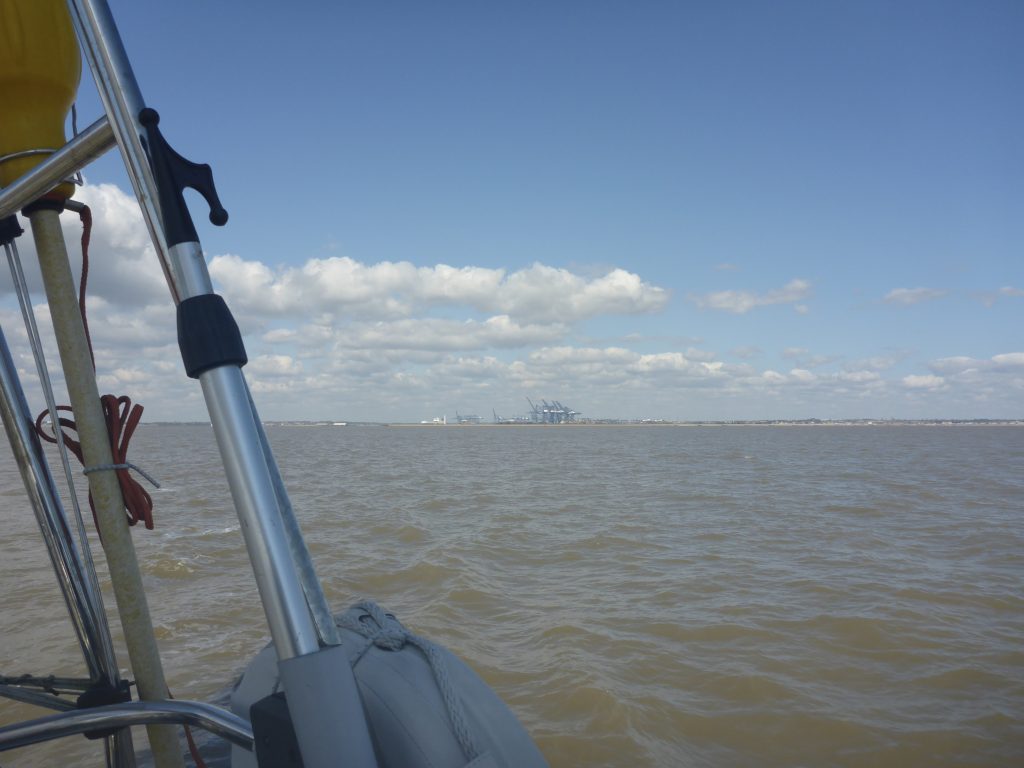 Fifteen tacks against a flood tide 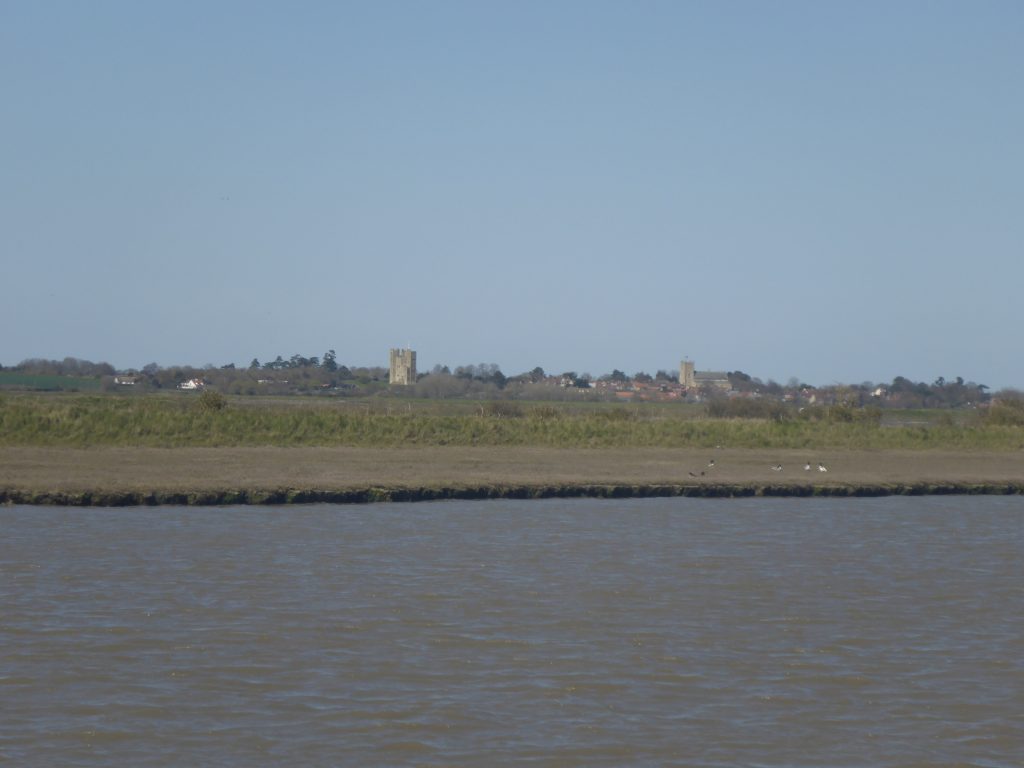 As usual I had to make a meal of picking up our very slippery mooring.  It slid out of my hand twice!  It would have been an entertaining sight from the foreshore.