September 2011 Samingo ll and Self

The first five hours were uneventful and we made excellent time passing Black Deep at 14.30.  There was a confused sea with winds no stronger than six coming from the west but we were romping along in great comfort.

The warning of Westerly gales expected SOON from Dover Coast Guard was received at 1720.  At that stage I was 40 NM from the Belgian coast and about 25 NM from North Foreland entering the Noord Hinder South TSS SW of North Falls Tail.  I think the warning had been issued at about 1500 hours.  That meant it was due in 6 – 12 hours.  I was still 6 to 7 hours from Oostende.  Let’s hope nearer twelve although I told myself it was bound to arrive nearer the 6 hour mark and this is indeed what happened.

North Foreland was out of the question as it was in to the teeth of the steadily increasing wind and seas that had suddenly risen again after moderating somewhat.  The boat had for a time been enjoying the most benign moments of the trip from a WSW 4-5.

By the time we were approaching the separation zone between the SW and NE lanes the wind had got up to a steady seven and with it the sea.  Samingo ll was caught by a big wave, luffed up, healed over practically 70 degrees and took water in the cockpit on the leeward side before promptly recovering.  I grabbed the helm and took over until we were through the NE lane very aware of the approach of Fairy Bank that we skirted to the SW.

The auto helm was presenting me with a problem as this was the first real test in heavy weather.  I prefer hands and eyes free to monitor and keep a good look out.  A single hander needs to glance at charts, AIS and check position not to mention relief from the helm is also required.  Adjusting the Auto helm a few degrees East helped a little but the autohelm was still on occasions unable to cope with the bigger waves.  There was a main swell from the W mixed in with a secondary shorter swell from the SW from the previous weather.

I had thought about rigging the third reef in the main but did not do it.  At this point perhaps I could have put it in.  We were running with a 2nd reef in the main and furled to the 2nd mark on the genoa.  Samingo ll can carry a lot of sail.

I was periodically able to confirm my heading with the chart plotter, mark position on the paper chart and check AIS before getting back to the helm.  I called two ships who, both agreed I could maintain course and speed while they altered course themselves.  Not much to see though in the troughs.

I contemplated Zeebrugge 40 NM miles away with its much larger entrance and practically unimpeded by off shore banks.  I would also be able to run.  The other non starting option was Flushing 70 NM miles away, which we would definitely not make before the tide would be creating a big wind over tide situation and it really races there.

I had another look at Reeds and opted for Oostende.

I was now at the helm for the best part of five hours.  It was raining heavily which combined with the odd wave landing in the cockpit made it quite tough.  I was occasionally caught out but wrestled the helm to windward as we neared the coast passing close to Oostende Bank west cardinal.  The lights of Oostende were totally obliterated by each passing wave that seemed to be the height and look of a closely packed cavalry charge, dark and menacing and certainly seemed the height of double decker buses.  The noise of the gale in the rigging and the roar as we surfed down the odd wave was staggering.  With nearly four meters of tide Middelkirke and Oosende Bank were not the greatest issues on the approach.

I had lots of time to think.  My only really disturbing thought since the wind and sea got up was the approach of the land and the Oostende entrance.  I did not want to let the boat down.  If I got it right Samingo ll would handle the situation with aplomb.  She deserved a good crew.  Don’t let her down!!!

The wind abated briefly in the approach with engine now running but came back with a vengeance to remind who was boss just as the first starboard buoy drew level.  I had talked to port control and I wonder if they would watch and inform me?  It took a huge effort to control the boat.  My glasses were covered in rain and seawater and I strained to pick up the leading marks, which did not seem to marry with the bend of the buoy age.  I had passed the new Oostende wavebreaks before I saw them only spotting them when turning my head to wonder why I was suddenly in flatter water with huge breaking seas behind me on two sides.  It was 23.35 BST.

I had got in safely with er ……….. rather too much luck.  A sailor makes his own luck with his or her planning, preparation, attention to detail AND the ability to improvise.  On this occasion I had er……  perhaps lengthened the odds. 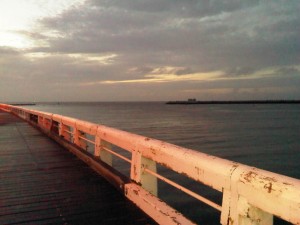 The following day a look at the new Oostende Entrance 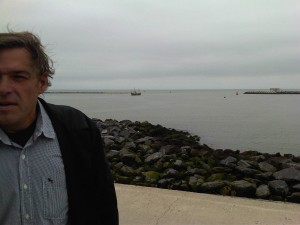 A day or two later I went sailing with my friend Pieter on his boat.  I took my hand held chart plotter that had been running when entering Oostende during the gale.  The hand held had stored my track during my entrance in the storm.  I was pleased and relieved to see I had entered dead centre of the new wave breaks right on track in to the harbour so I must have done something right. 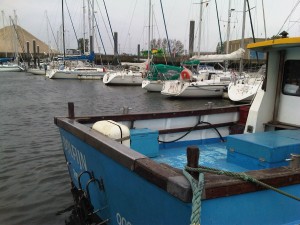 Samingo ll (green awning) in RYCO Oostende.  It was windy for days.

I went to Bruges and sent an email to Pieter
“Truthfully tourism can destroy a place but they definitely have the right mix.  It’s a staggeringly beautiful place and they have managed not to spoil it with visitors.
I followed a route in a guide book and just spent today looking and listening.  How important is the 11th July?
I’m taking Sally there SOON.
Talking of the wind. It was bad enough in Brugge.  The place nearly turned in to The Wizard of Oz.  Buildings and old people taking off.  Certainly a few smart cafe umbrellas went off on their own chased by frightened waiters.  A few tourists could have been impaled!  When I got back to RYCO it was hard work to walk back from the Tram stop.” 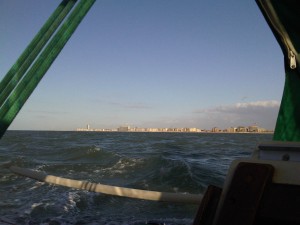 A few days later I set off west in what should have been a gentle beat down the coast and then a little motor sailing possibly to Dunkirk but the wind got up again and I went in to Niewpoort. 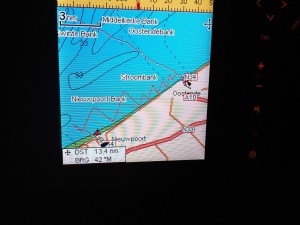 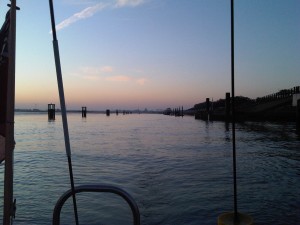 There was noone about in the Yacht Clubs! 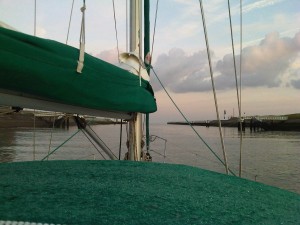 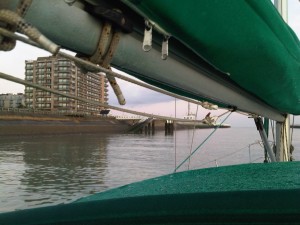 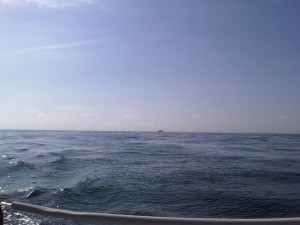 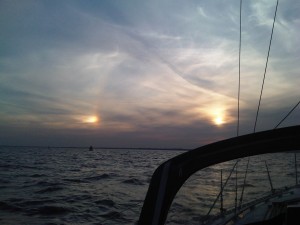 Coming in to Harwich later in the day 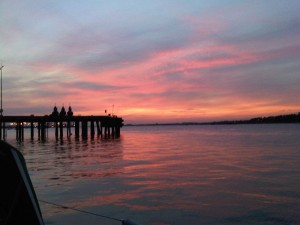