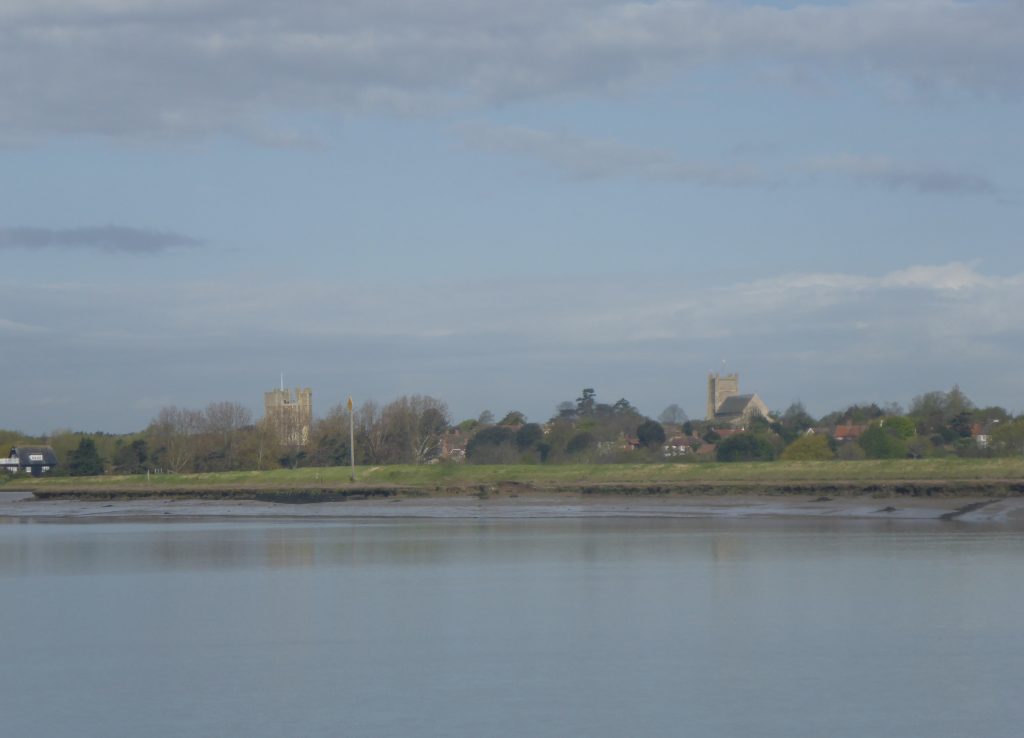 I try not to upset the professionals (or indeed anyone), particularly as I’ve been paid to sail on the very odd occasion.

Bob Roberts sailed Thames Barges when they were still working ships … and I emphasise … under sail with no engine.  I gladly quote from his wonderful book ‘Coasting Bargemaster’.  A must read incidentally about a very tough existence requiring seamanship at its very very best.

“Others just blunder about in a world of innocence and bliss, get in other people’s way, and are a thundering nuisance to the likes of us”.

I’ve been on board since Sunday but I was unable to leave the river until this morning. 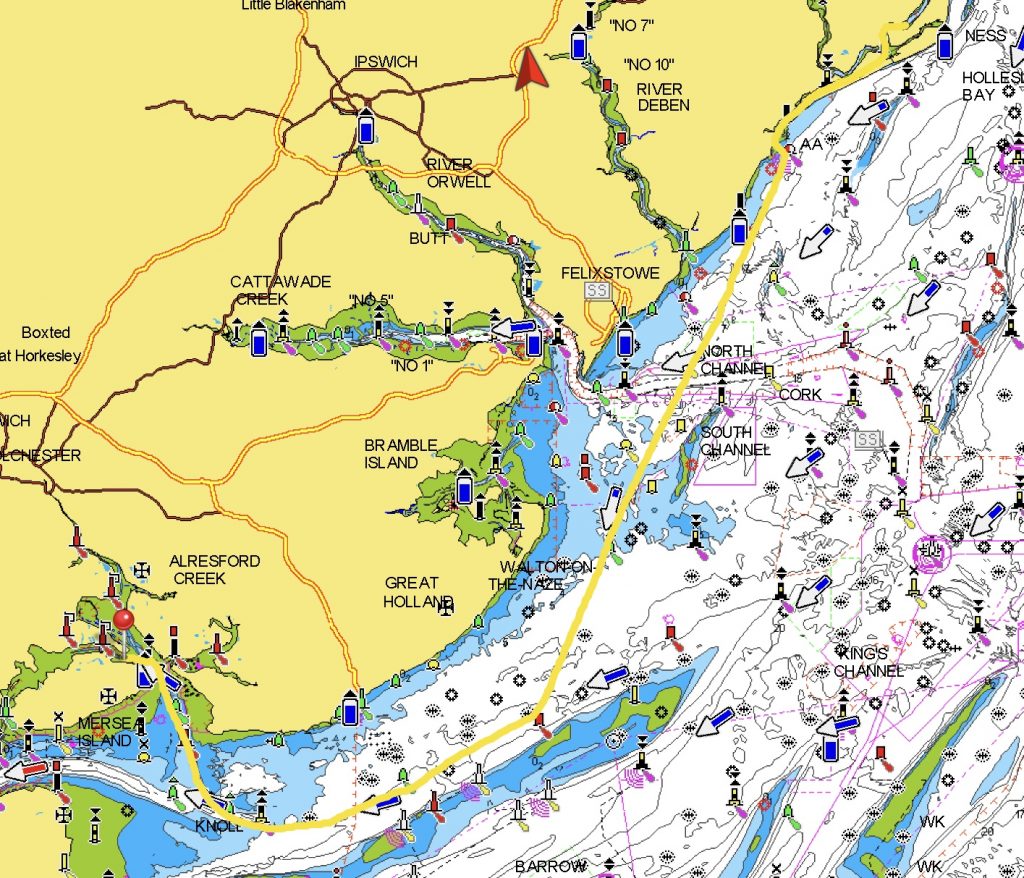 11th May Orford to Pyefleet Creek

It was a beautiful day, which started with a light easterly wind that strengthened and veered south in the afternoon. 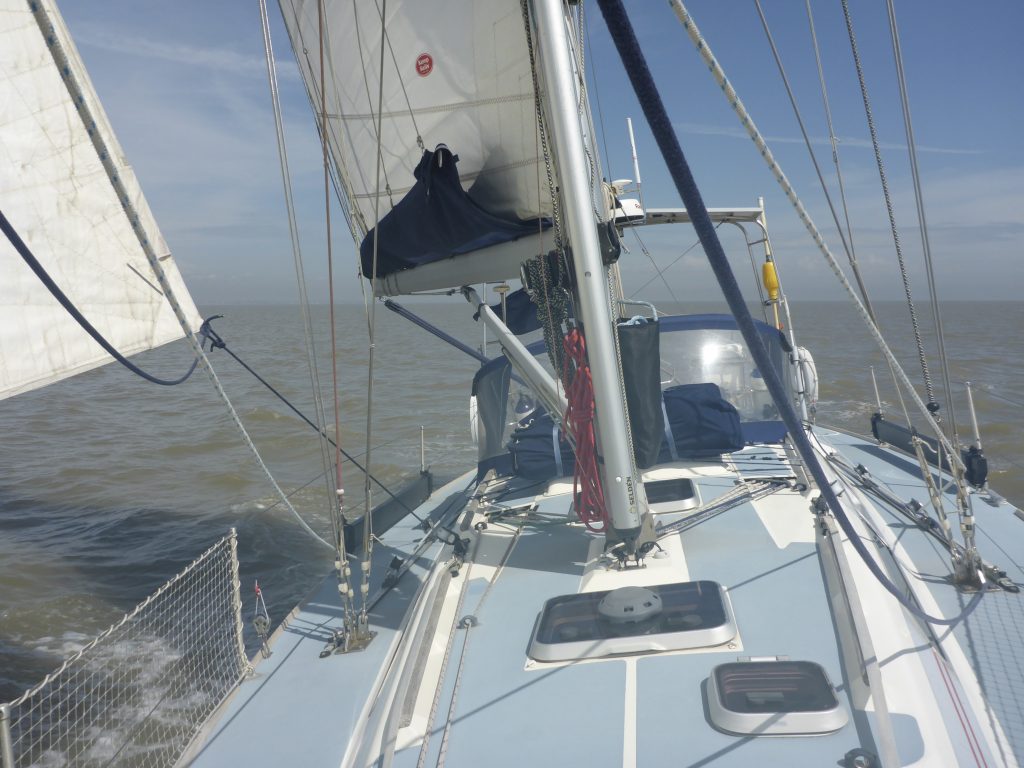 11th May Orford to Pyefleet Creek

By that time we were approaching the Wallet Spitway, having hugged the Gunfleet Sands as we made our way down the Wallet.  Most of the day was spent on a comfortable beam reach under full main and genoa. 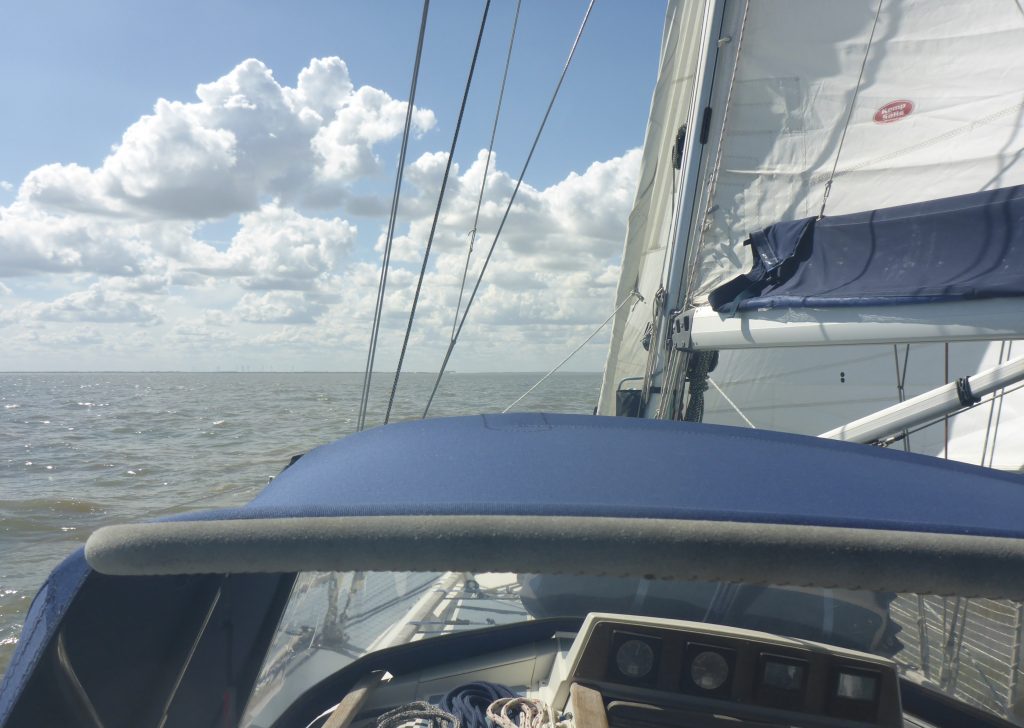 11th May Bradwell Power Station on the horizon.

A following wind took us from the Colne Bar in to the Colne under main only.  We are now at anchor in Pyefleet Creek.  And for the first time it’s not cold … yet. 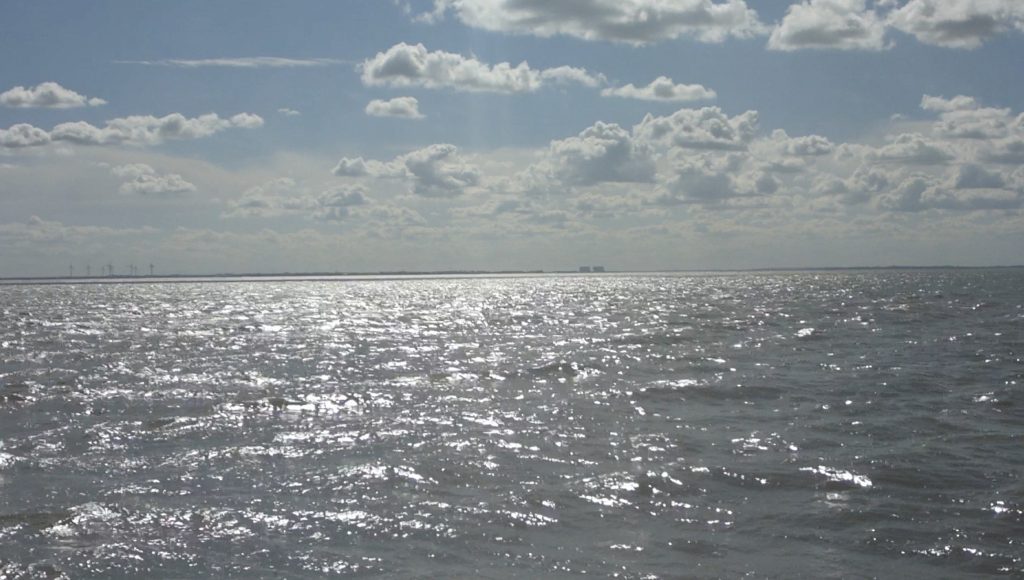 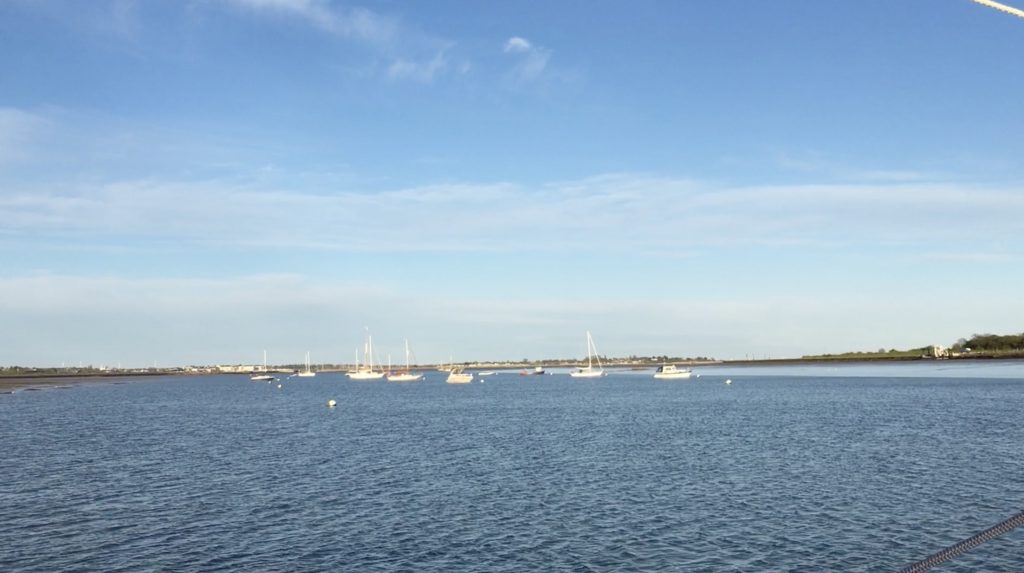 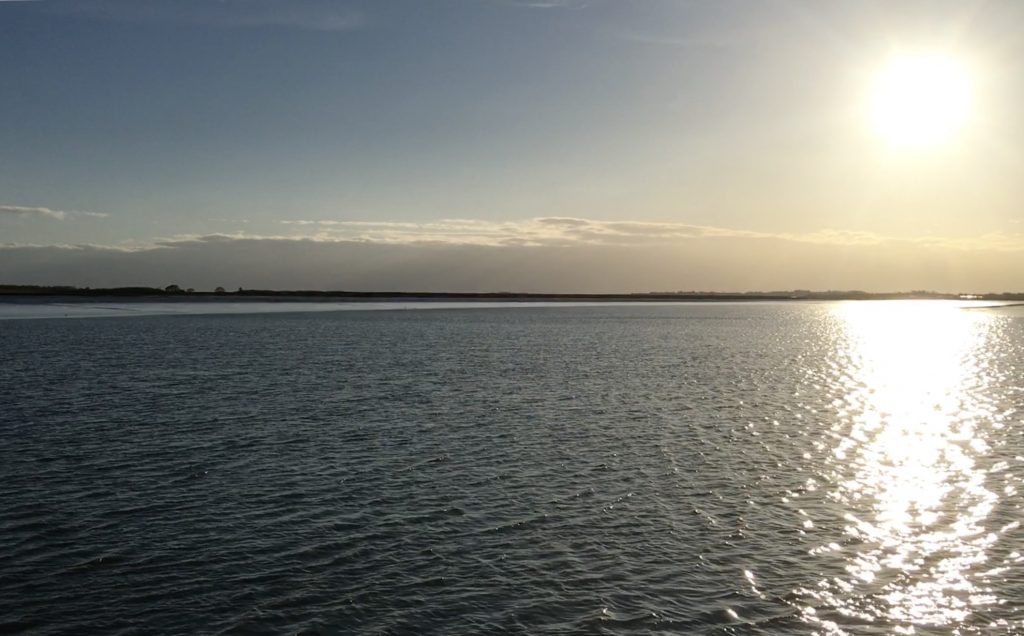 … Pyefleet Creek with the sun going down

What a lovely day.

But back to being a “thundering nuisance”.  I nearly ran over a drift net … not once … but twice.  The first time was a close shave.  In all the time I’ve sailed in the Thames Estuary I’ve only seen a drift net twice.  One was above Orford Haven and the second was across the Wallet.

Today, I saw both fishing vessels, but not the nets, until I was fairly close.  The first fishing boat, off Bawdsey beach was friendly enough, but felt I was not keeping a proper look out!

The second was off Woodbridge Haven.  I hold my hands up!  That they were unexpected is not an excuse.  But the tiny string of buoys are tricky to see until you get close.

Both fishing vessels today were patrolling close to their nets.  The drift net in the Wallet a few years ago did not have a vessel close by, but I did get a call on the VHF from a fisherman ashore monitoring AIS … but just too late.  ‘Talisker 1’ had sailed straight over the top and hardly disturbed the net at all.  I understand the actual net is about two metres below the surface.

There are usually some appallingly marked pots off the Naze.  Today there were some close to Medusa.

On the 12th we sailed from Pyefleet to the River Orwell. 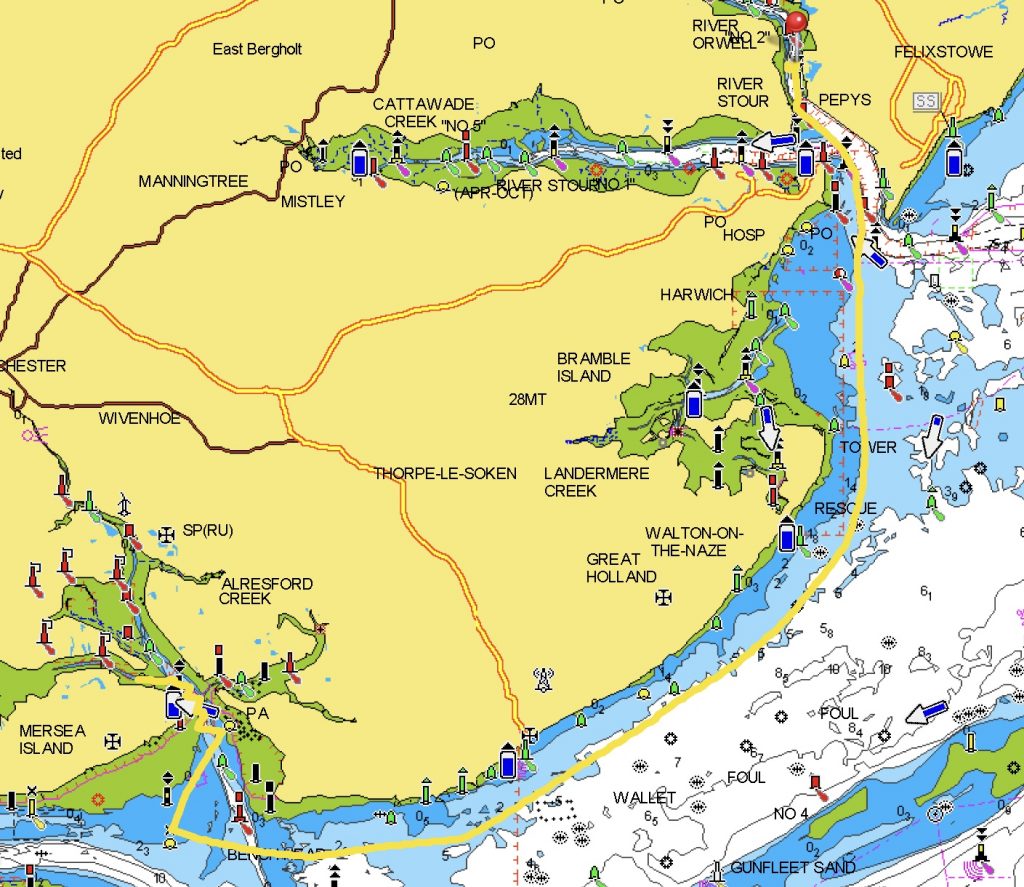 12th May Pyefleet Creek to the River Orwell

It was another lovely sailing day which started with a beat out of the Colne. 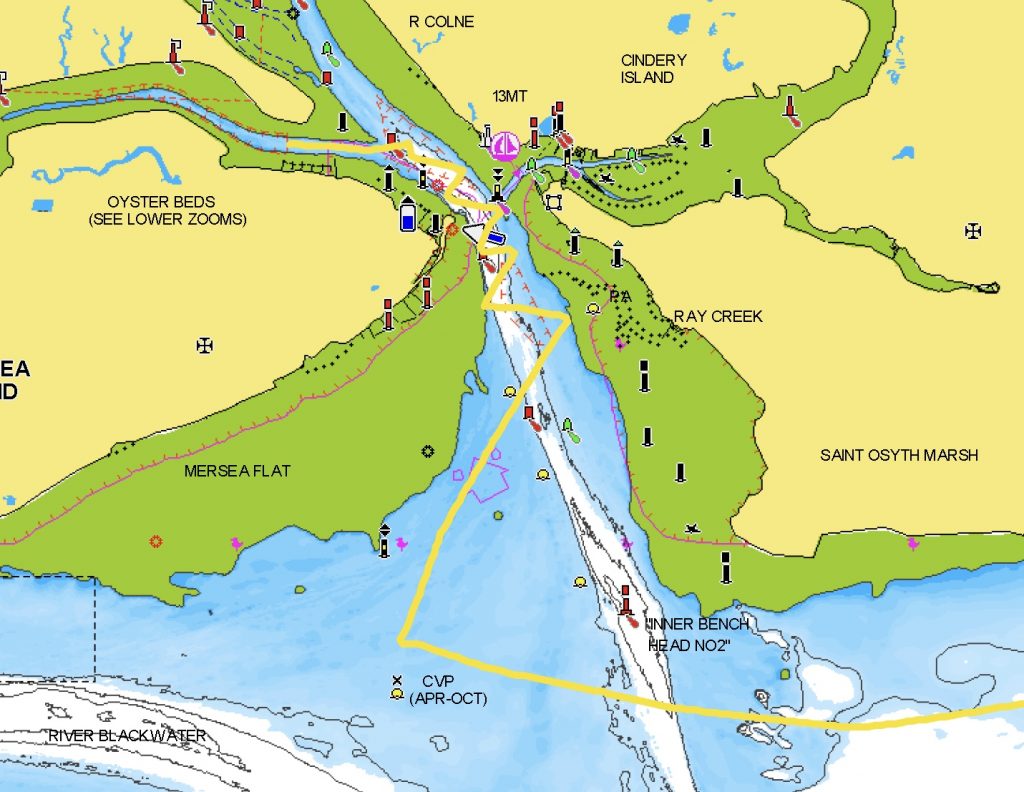 12th May started with a beat out of the Colne

I managed to avoid a Sonata from the Colne Yacht Club who suddenly came about without looking behind him.  Both boats were then on the same tack and the Sonata, being the windward boat, I expected to give way.  I waited a second or two for them to do so, before taking evasive action myself.  I think they were teaching!!  A safety boat was in attendance close by. 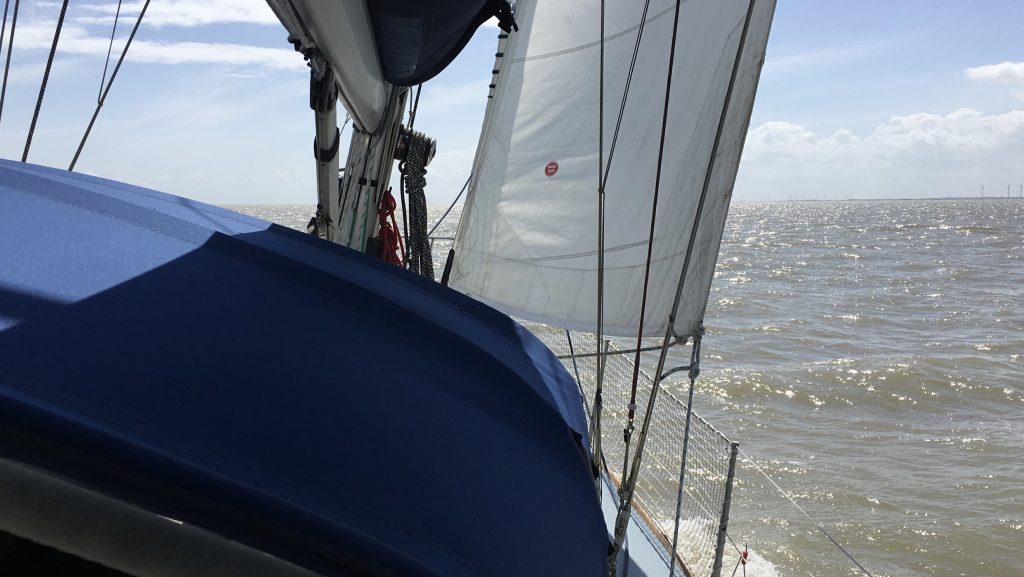 12th May Beating out of the Colne 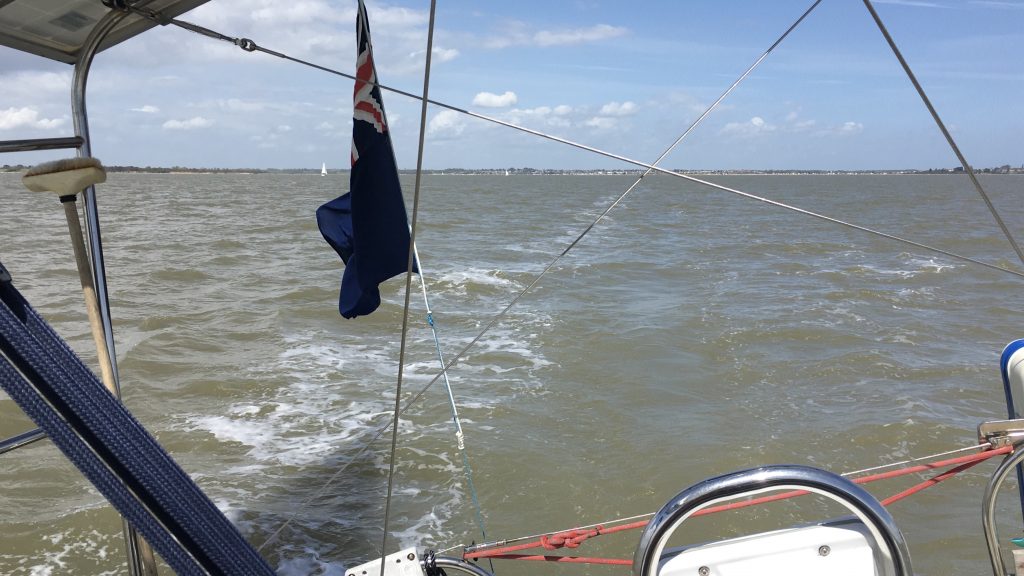 12th May Leaving the Colne behind us

The sail up the Wallet was in light airs on a beam reach but with a strong ebb tide beneath us. 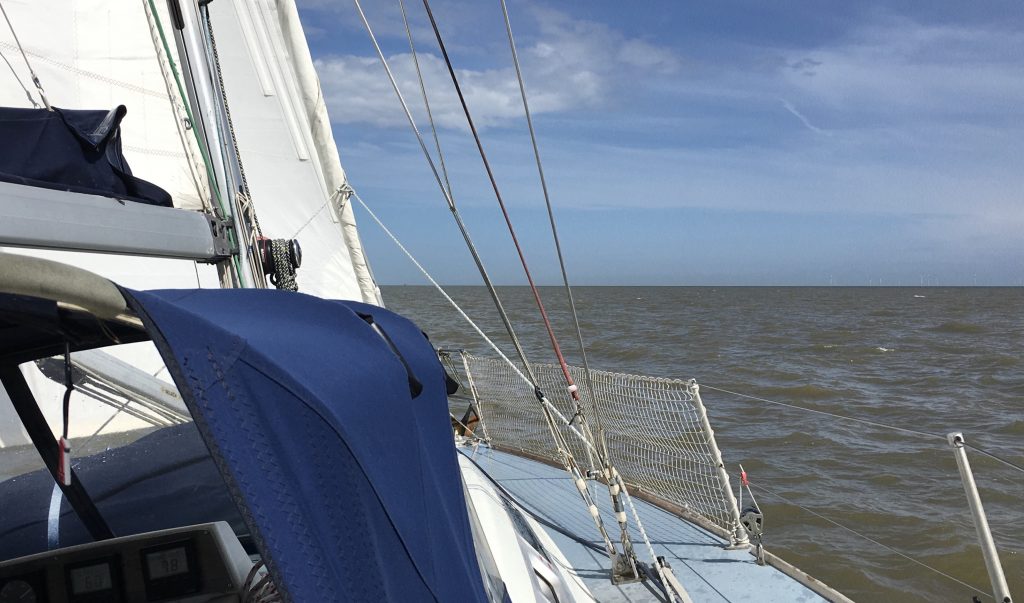 12th May Sailing up the Wallet

The gentle breeze nearly died and backed a tad off the Naze before there was just enough to caress us in to the port of Felixstowe and on in to the Orwell. 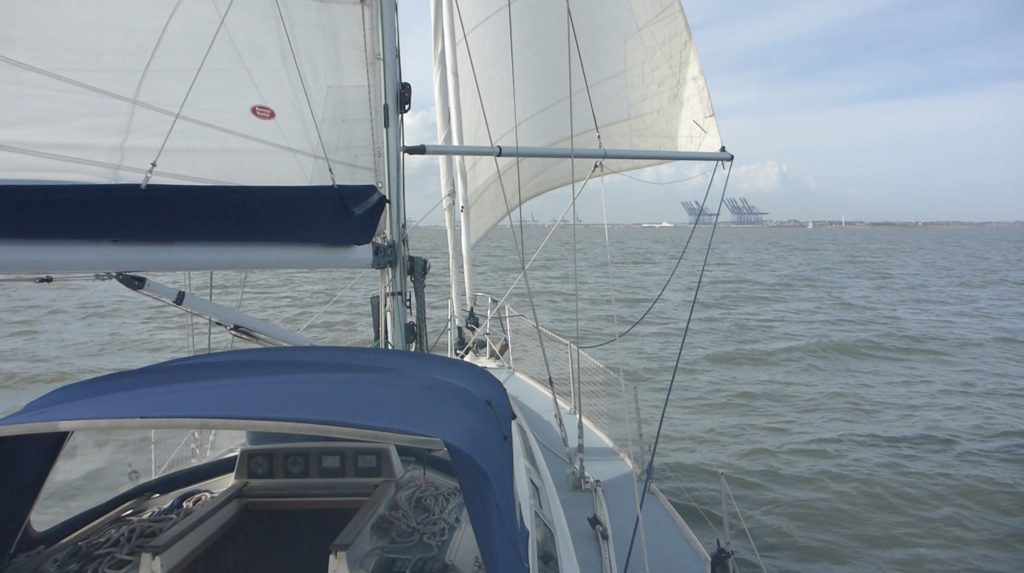 The wind was going to be blowing gently from the east overnight so we had a peaceful night at anchor tucked in close to the bank off Trimley Marsh.  A perfect spot. 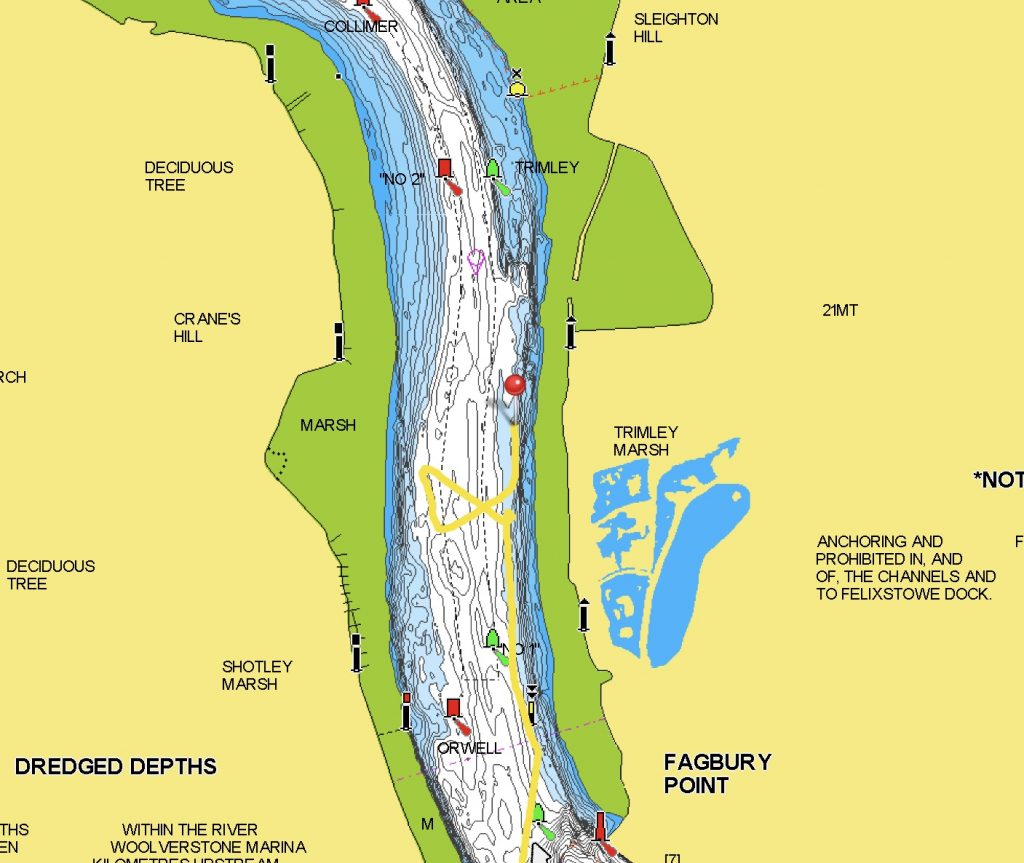 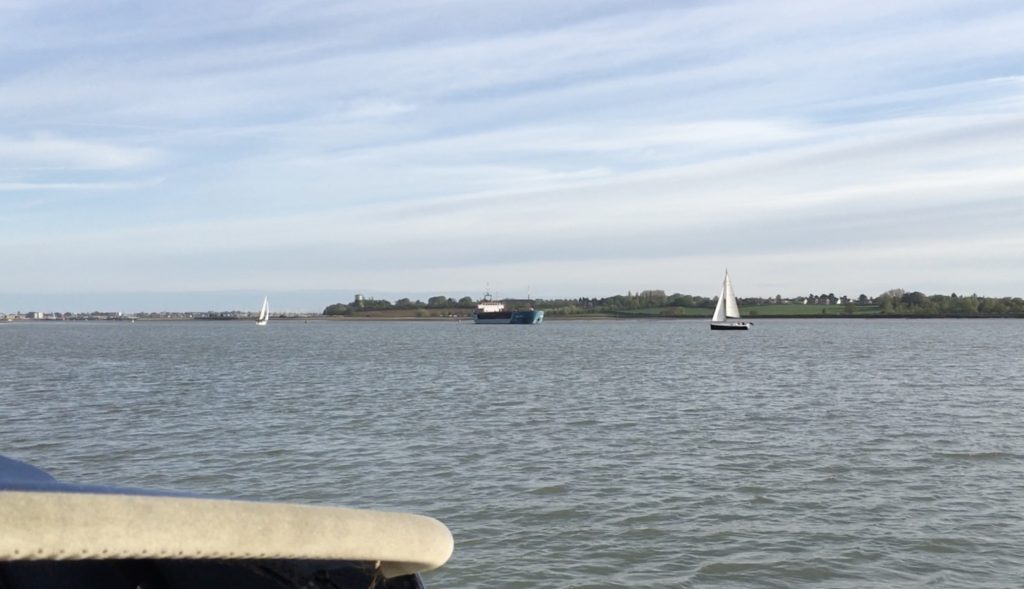 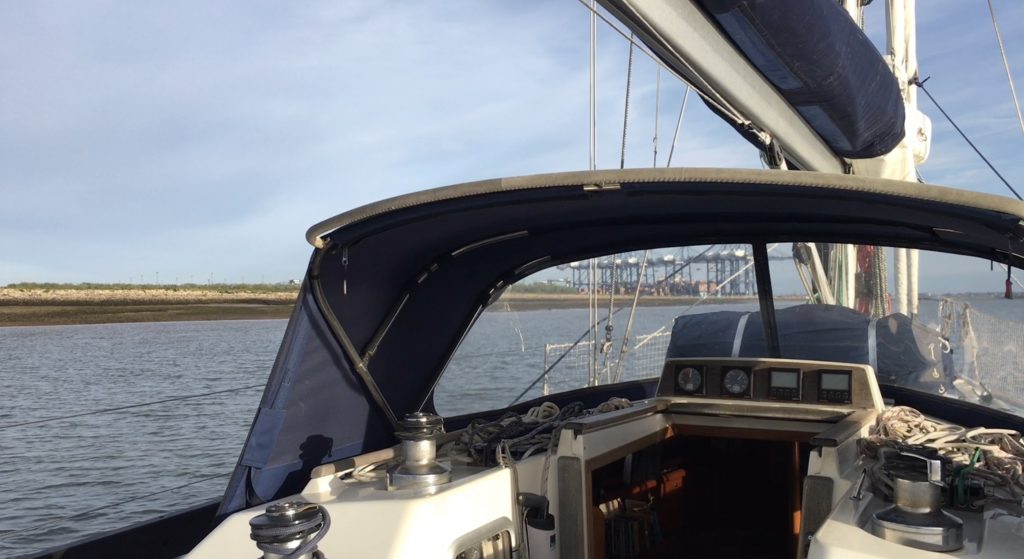 12th May A perfect spot

I wondered whether to sail back to Orford on the 13th in north easterly winds but they were not going to be strong.  12 to 19 knots forecast.

It was going to be a beat against the flood tide with my plan to cross the Orford Bar an hour before HW Orford Haven. 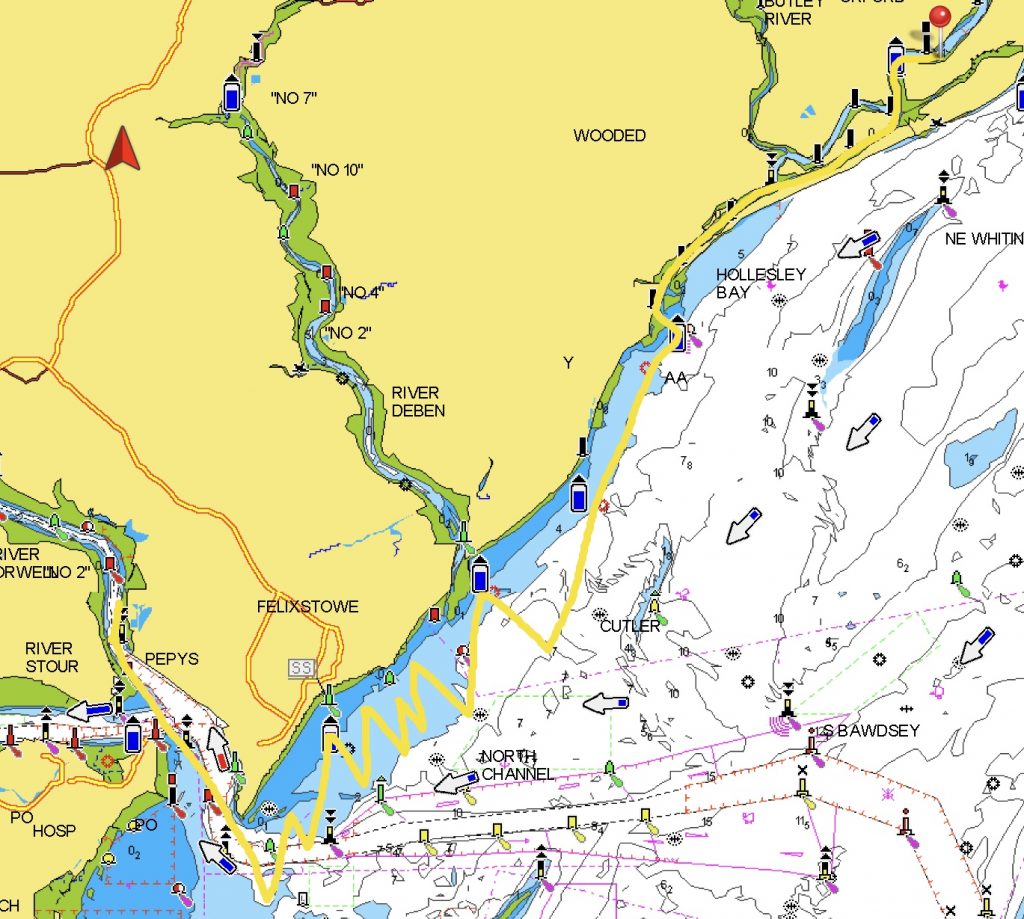 13th May A beat against the flood tide. The Orwell to the Ore

With timing arriving at Orford Haven so important it means the flood is at its strongest from Languard Point to the Deben and very slightly beyond.  But on this occasion, from just before Woodbridge Haven, I concentrated on pointing as high as she was comfortable, without losing too much speed and then, with a very slight veer of the light breeze, we made Orford Haven from the Deben entrance on one tack to end another good sail which was only marred by a little rain throughout the morning.

Our wonderful Harbour Master taxied me ashore in the Harbour launch. 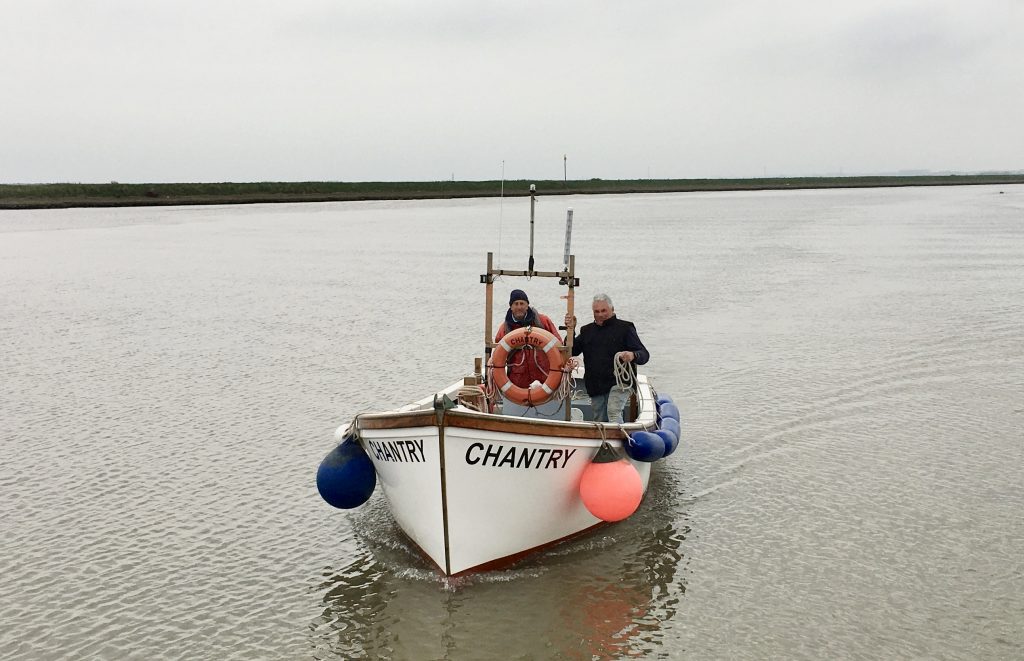 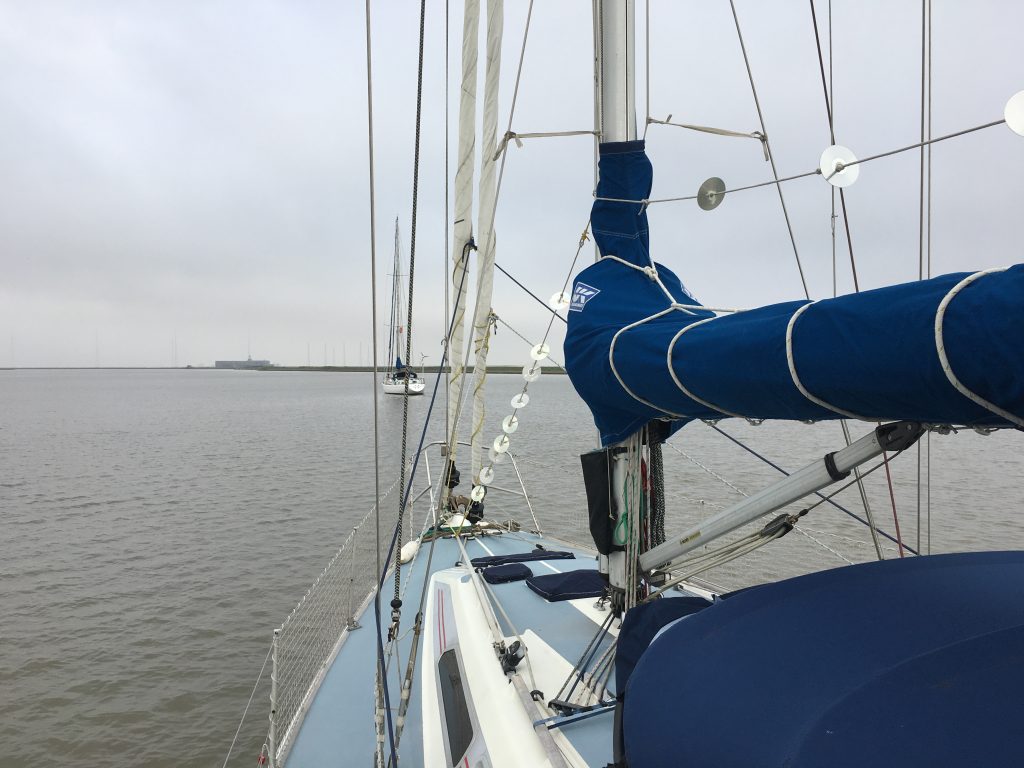 13th May All tucked up

I’m itching to sail further.  Much much further! 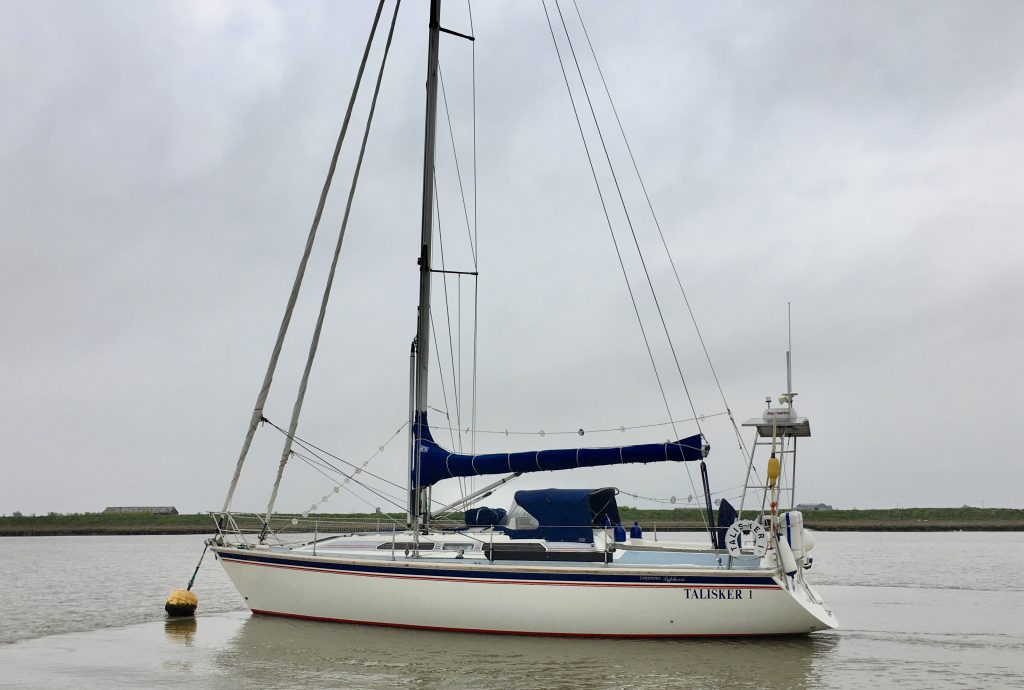