Me and ‘Talisker 1’ are anchored, tucked close to the west bank of the River Orwell, just up river from Orwell PH Buoy.  It’s been blowing hard from the south west and this is going to be ideal overnight.  ‘Talisker 1’ is lying comfortably head to wind.  A good spot and at this time of year, we will certainly be alone! 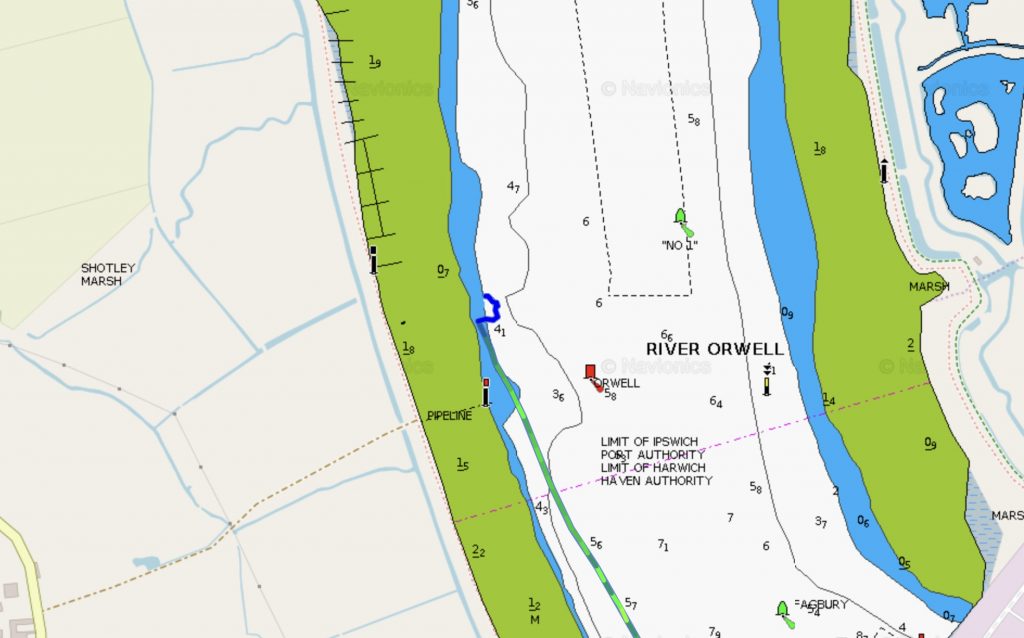 A perfect anchorage in westerlies

But surprisingly, soon after we dropped anchor at 1300, two more boats arrived and also anchored close by.  One is a pink Sadler 29.  Even her tender is pink. 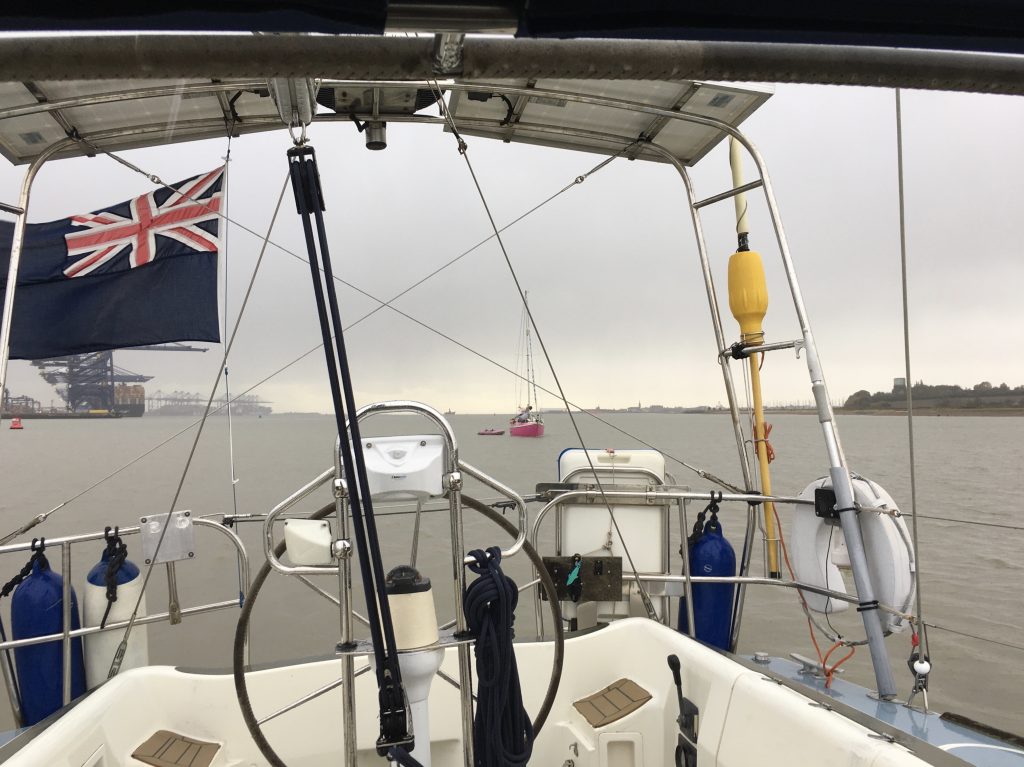 She passed close by under sail and asked if I was anchoring for the night and then anchored skilfully, bang between the pipe port hand beacon and the Orwell PH buoy, under sail.  I’m pretty certain he’s also a single-hander.  He told me that his depth sounder was not working!  As I write this at 1830 it’s pitch dark.  The Sadler has no riding light!

I’m full of aches and pains.

On Saturday our wonderful Harbour Master Philip dropped me off on ‘Talisker 1’ after I’d completed a safety boat duty at the sailing club.  I wanted to go to the ‘cruiser supper’ in the village, but the idea of going ashore by tender and then back out to ‘Talisker 1’ on a cold dark night, was not appealing. 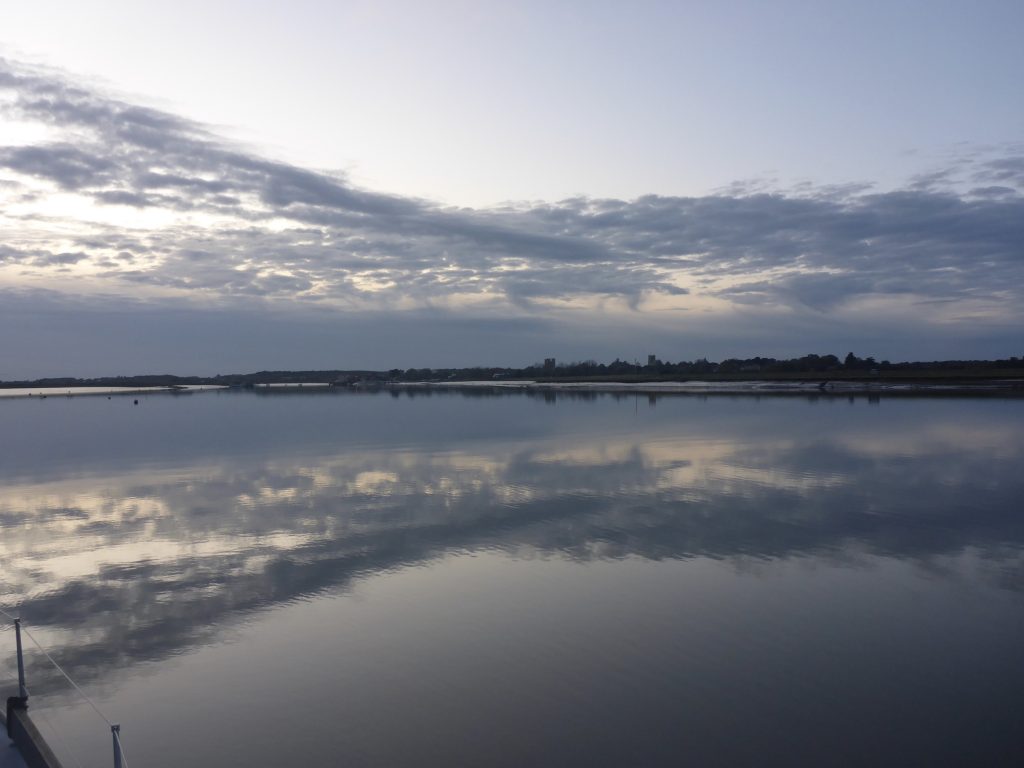 9th November, Orford. The last night on our mooring 2019. 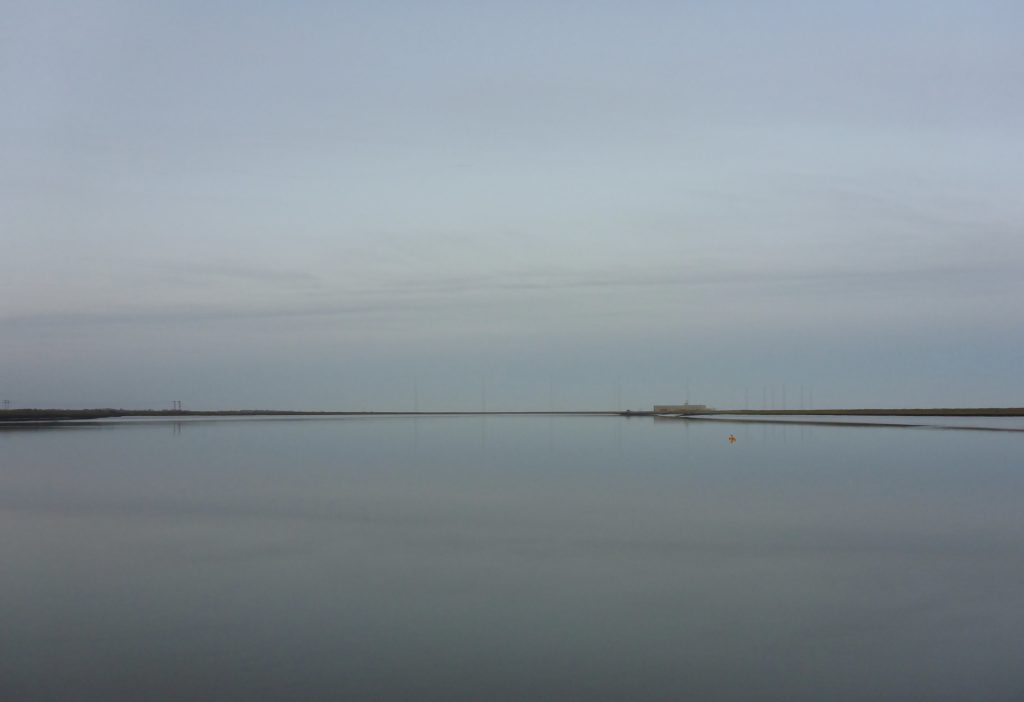 View to the north from our mooring.

HW at Orford Haven was 0945 on Sunday morning and we dropped the mooring at first light and crossed the bar at 0800. 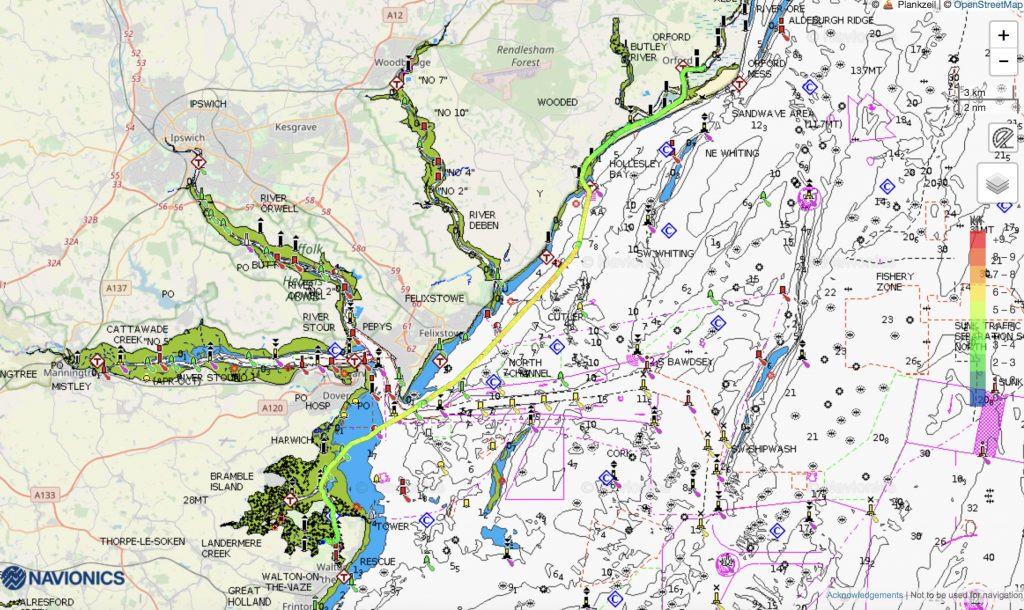 Orford to the Walton Backwaters … Not enough wind. 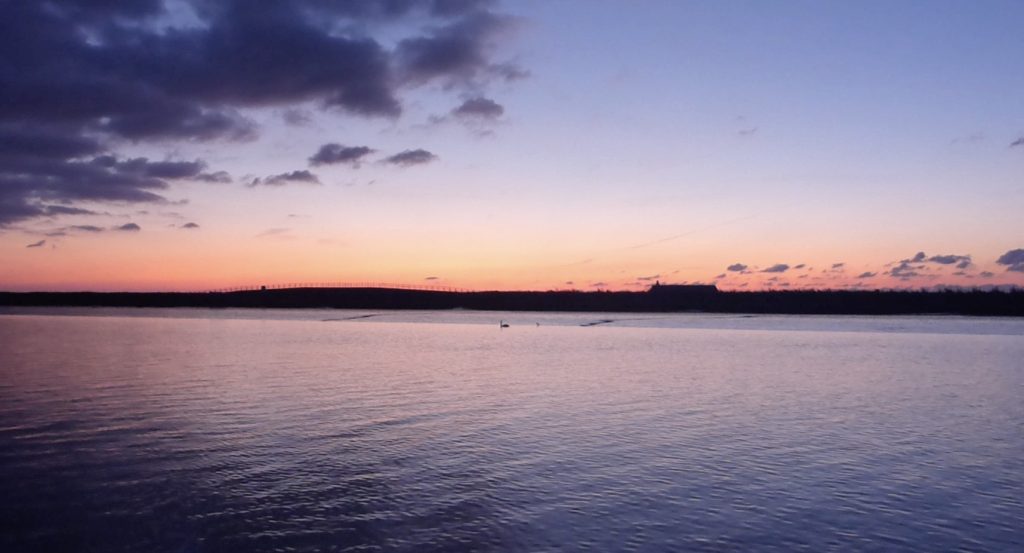 Dawn 10th November from our mooring … 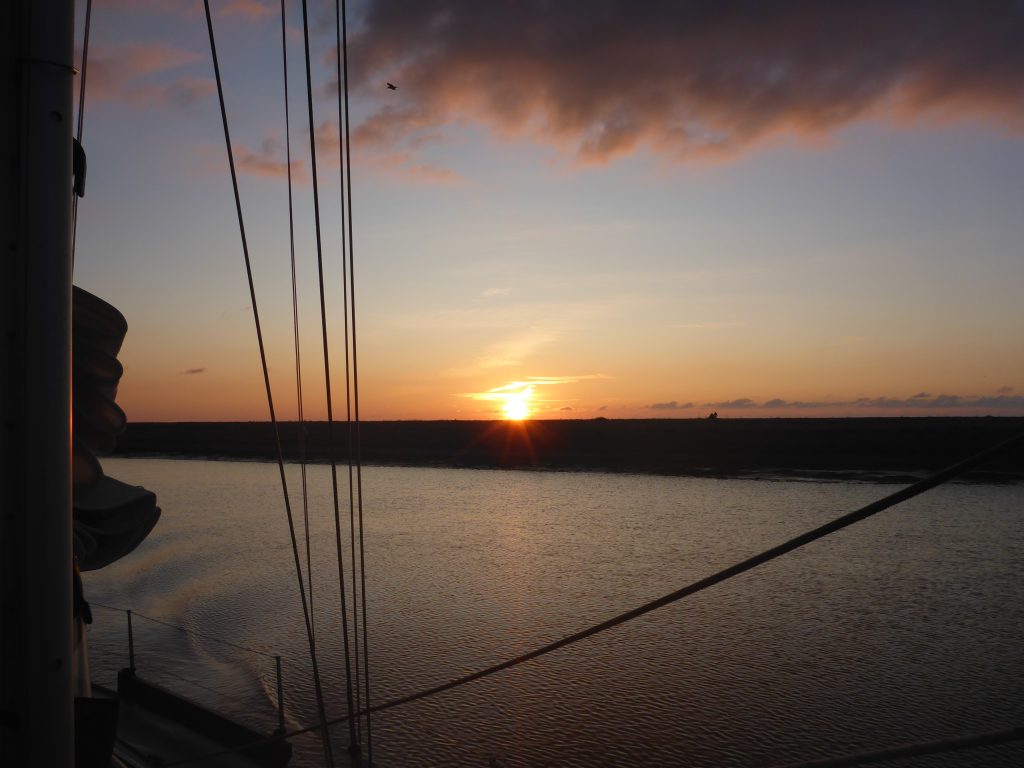 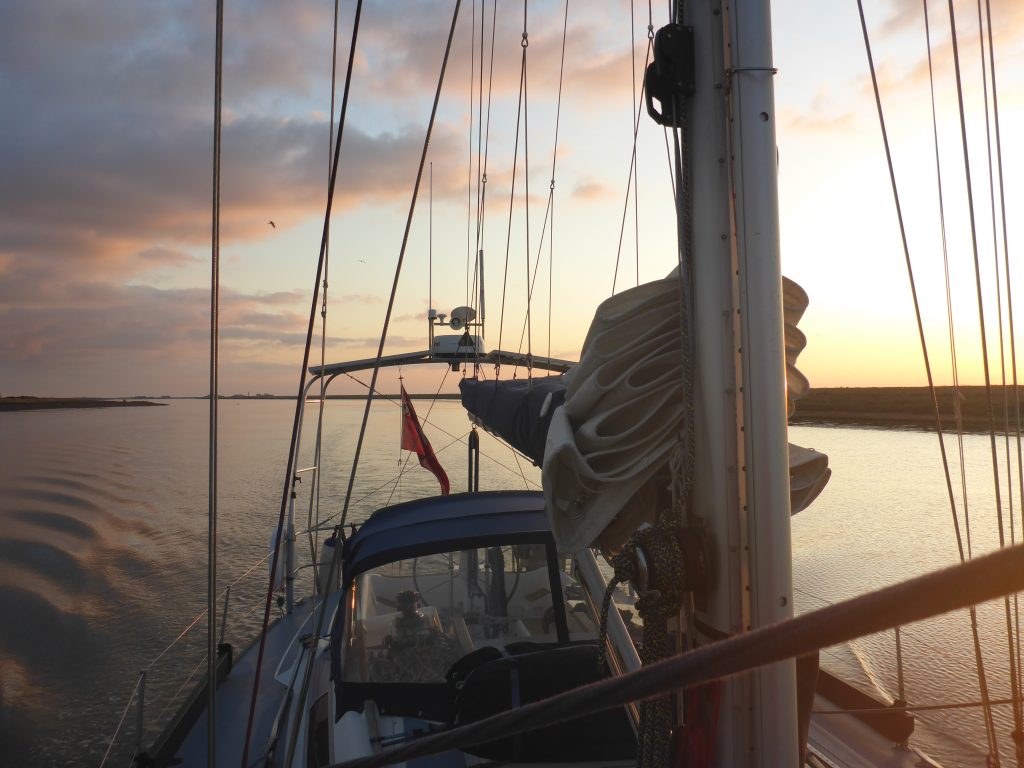 There was plenty of water.  Both Oxley and Weir had been taken out.  I’d marked the positions of the buoys as waypoints when last inbound to the river in early October. 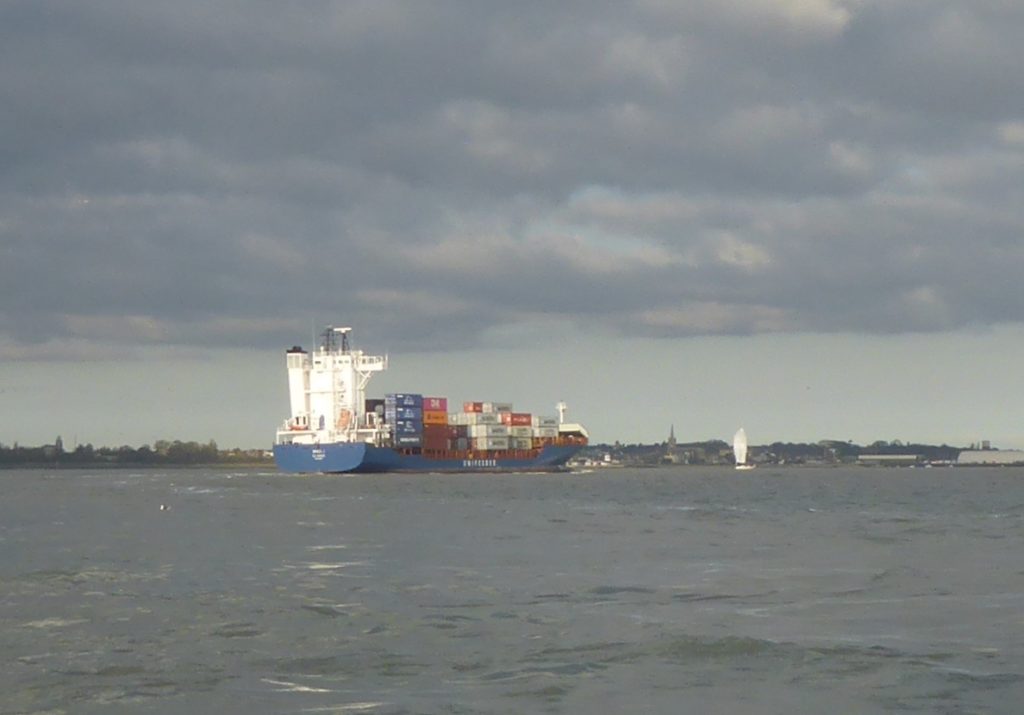 With hardly a breath of wind we motored directly to Hamford Water and on up to Titchmarsh Marina.  I’ve just had a couple of days winding down in the marina.

This morning we sailed under stay sail only to the Orwell. 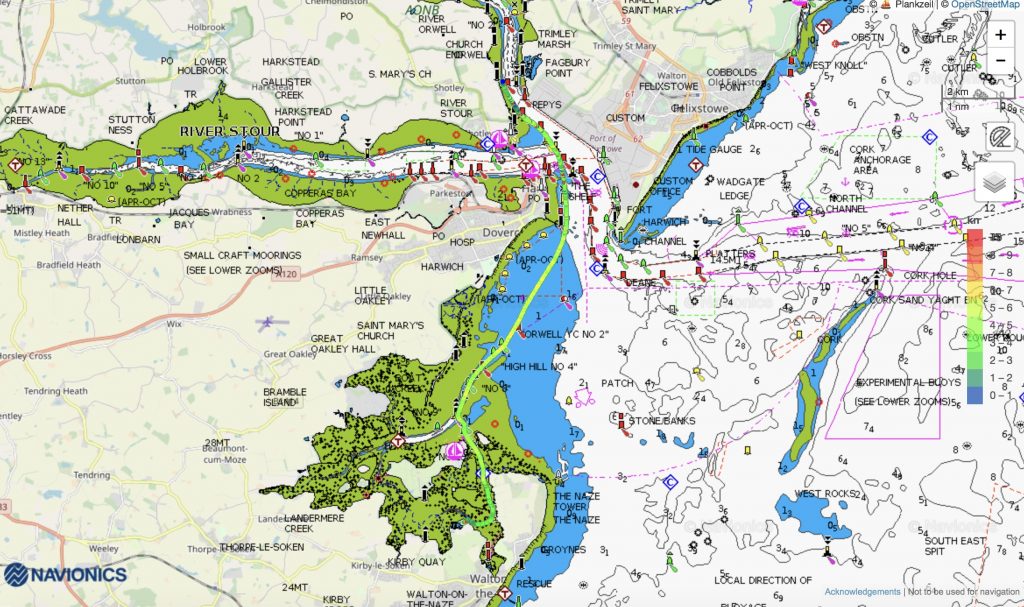 Walton Backwaters in to The Orwell 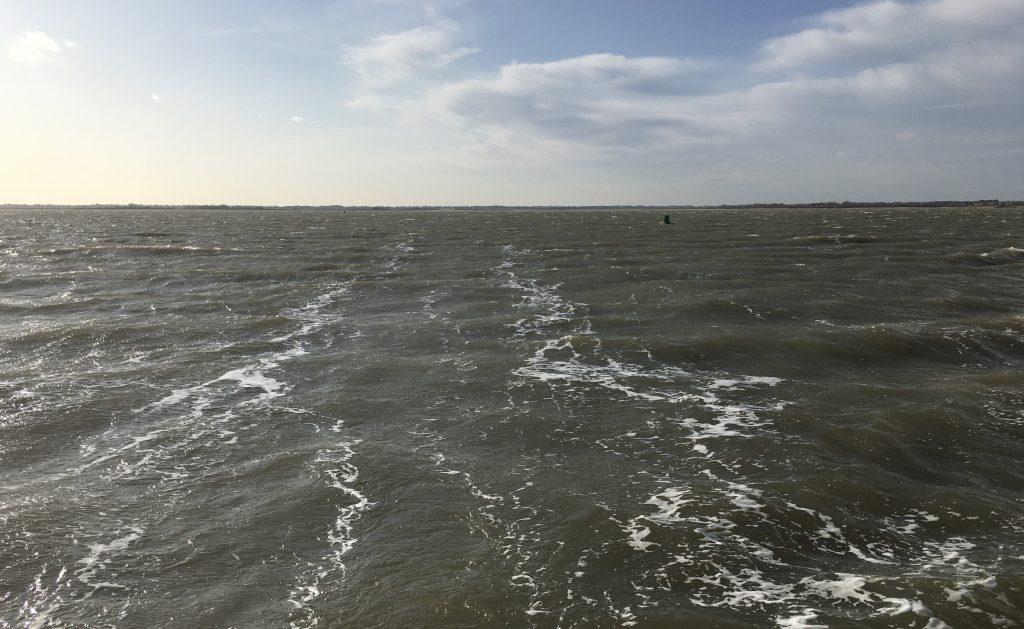 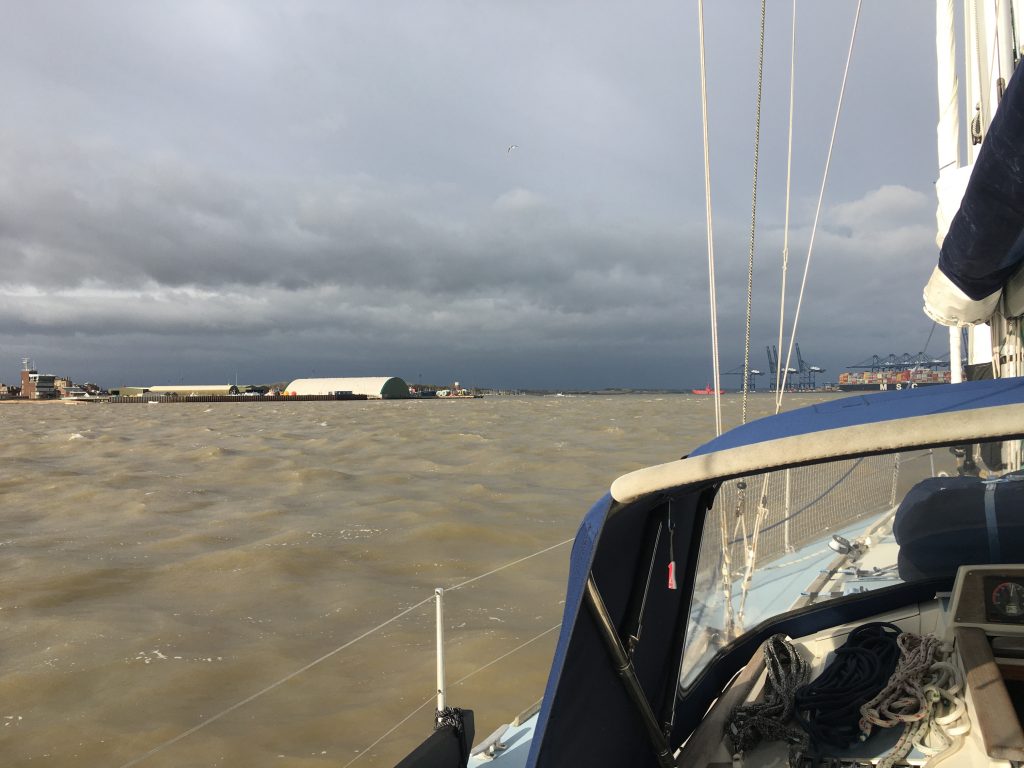 Harwich to port. Sailing under stay sail only.

The wind will drop over night and veer a fraction.

I’m contemplating taking the flood down the Wallet, which will mean leaving at first light. 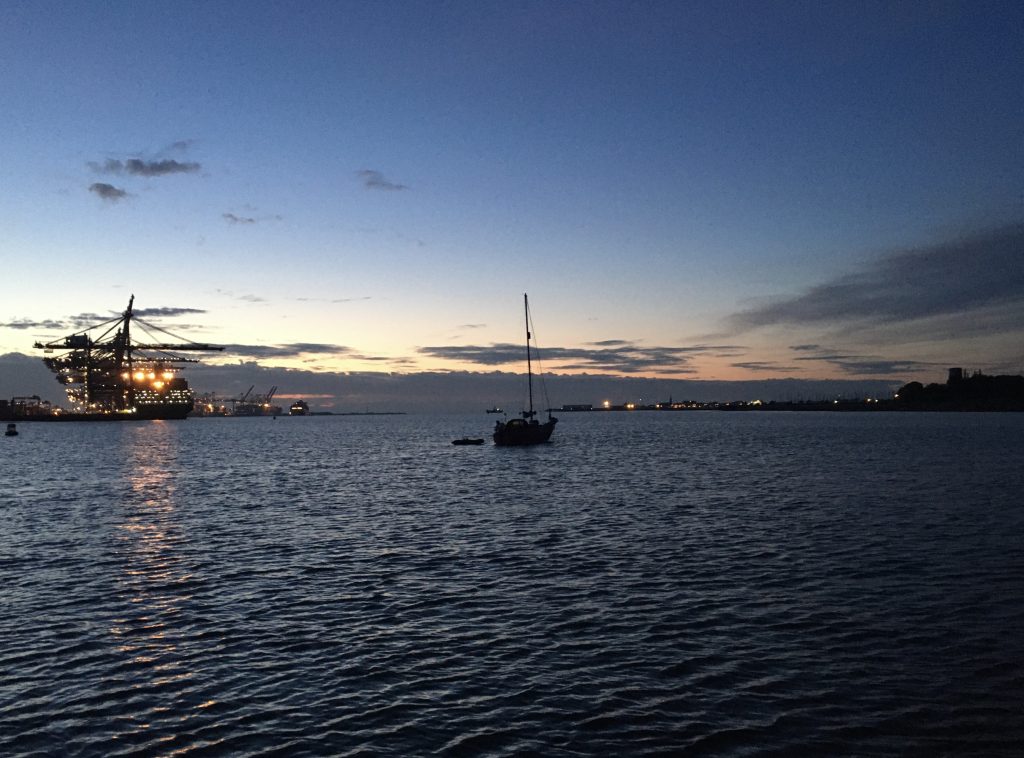 Dawn. The pink Sadler 29 had no riding light … 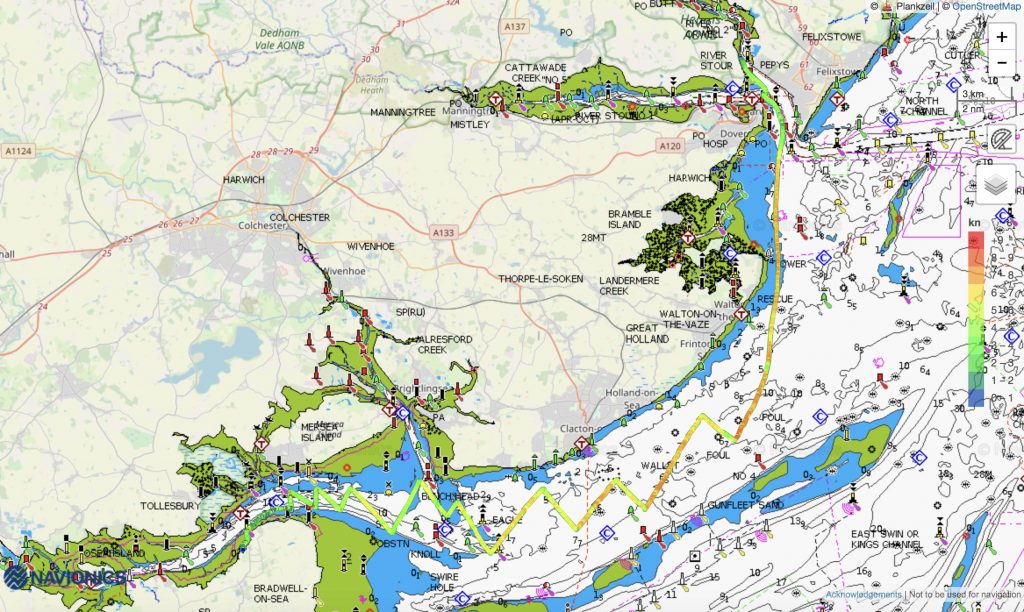 A beat down the Wallet

The alarm woke me at 0600.  It would be a clear day with light westerly winds … light?  Well that’s what was predicted!

Most of the beat down the Wallet was with a reefed main and stay sail with 20 knots + over the deck. 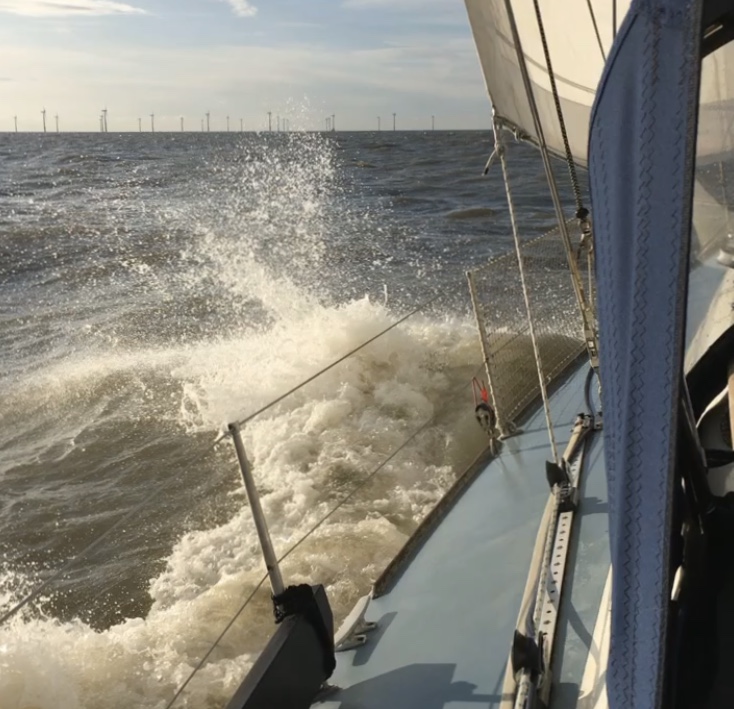 The day was glorious with crystal clear visibility and certainly no sign of another pleasure craft.  ‘Talisker 1’ smashed it.  I just watched her at work. 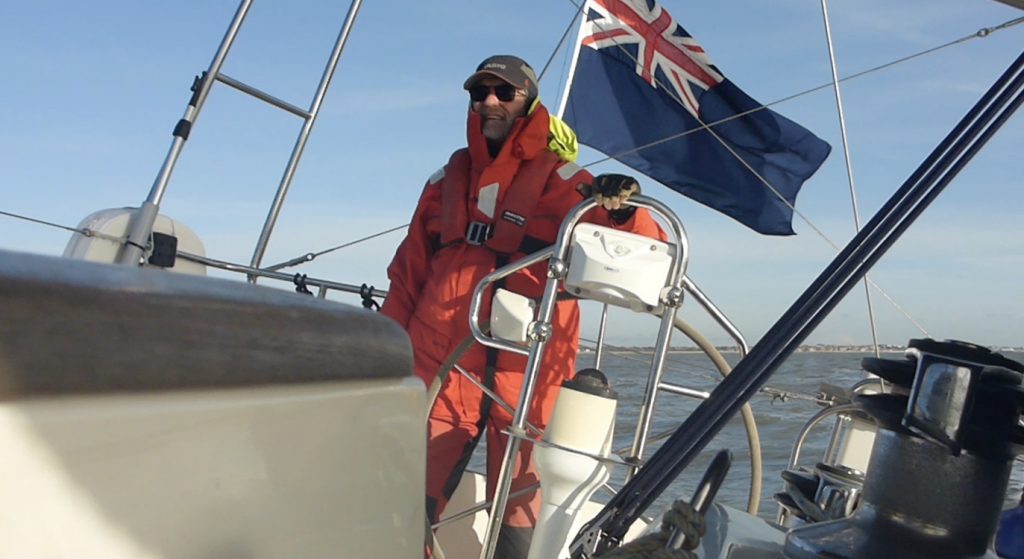 The wind had dropped by the time we passed Bench Head and finally we started the engine a mile below Bradwell after seventeen tacks down the Wallet and in to the Blackwater. 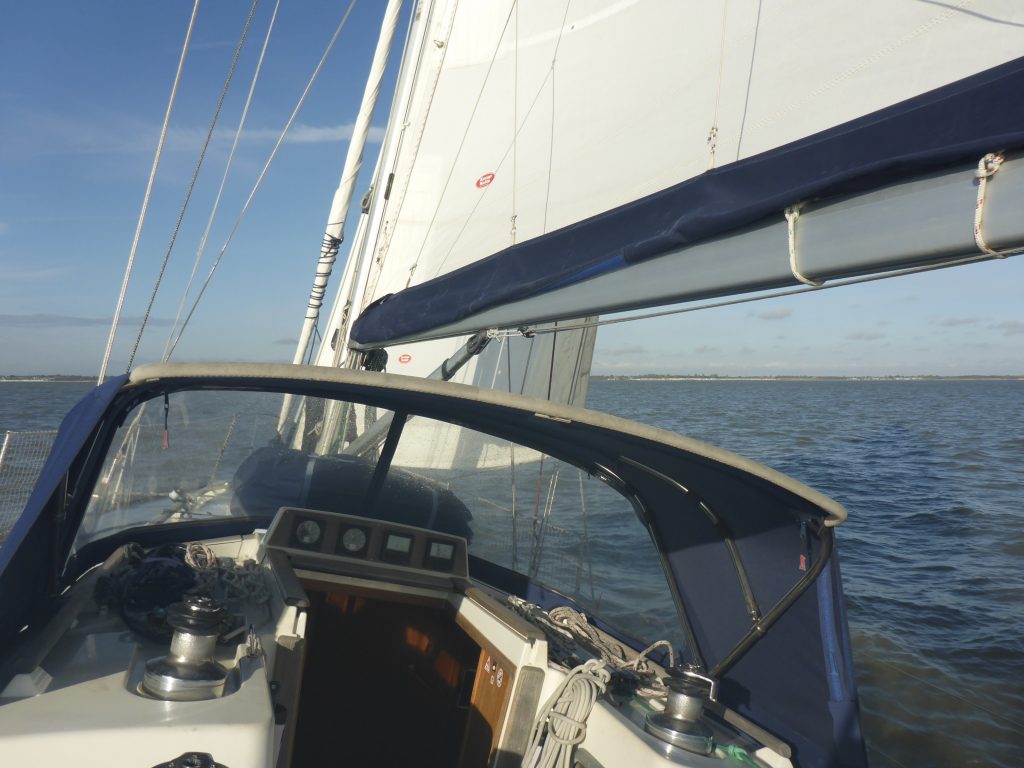 Entering the Blackwater as the wind started to die

The ebb had just started and the westerly wind had completely died.

An hour later we were comfortably berthed in Bradwell Marina.  I walked in to the village for some groceries.

The benefit of Webasto heating when anchored is wonderful at this time of year.  Plugged in to shore power in a marina and I have an electric heater keeping the chill out of the cabin.

It would be lovely to sail all the year round.  I hate taking the boat out of the water but she’s in need of some TLC and this can only be done out of the water.  I am looking forward to returning to my favourite shipwrights.  Larkman’s Boatyard at the top of the River Deben have a space for us. 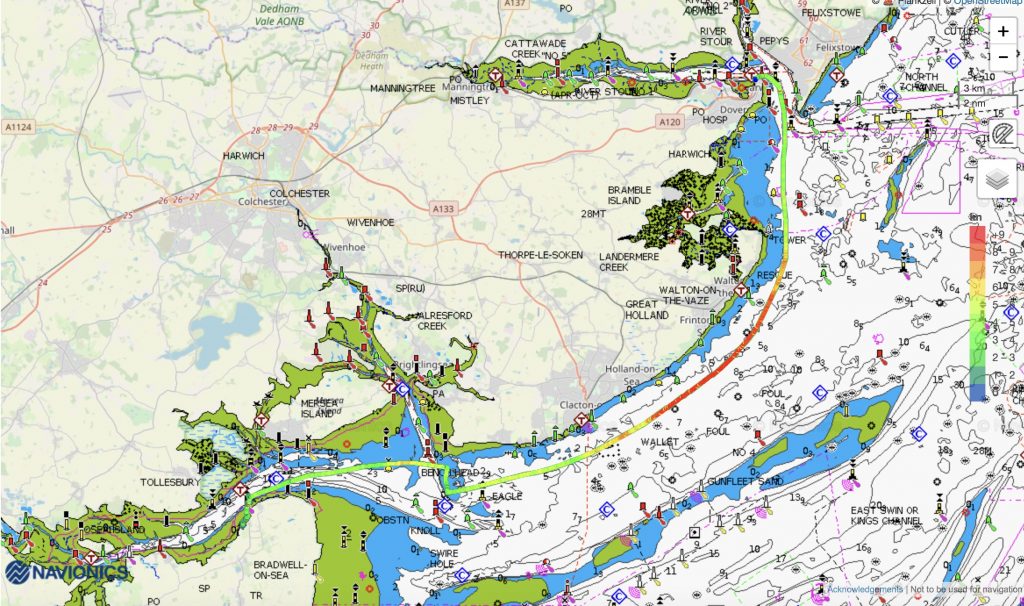 The Blackwater to Harwich. Note the red in the track when the wind arrived …

Me and ‘Talisker 1’ are alongside at Hapenny Pier, Harwich after a glorious afternoon sailing in an empty Wallet.  What would the late great Maurice Griffiths have made of a wind farm on his beloved Gunfleet Sands that, at times had offered him protection and on another occasion had so nearly taken his life?

After early morning rain we were close hauled out of the Blackwater with a steady 14 knots over the deck from the south east.  The visibility was crystal clear and there was rain about with a mass of forbidding dark grey over Harwich to the north. 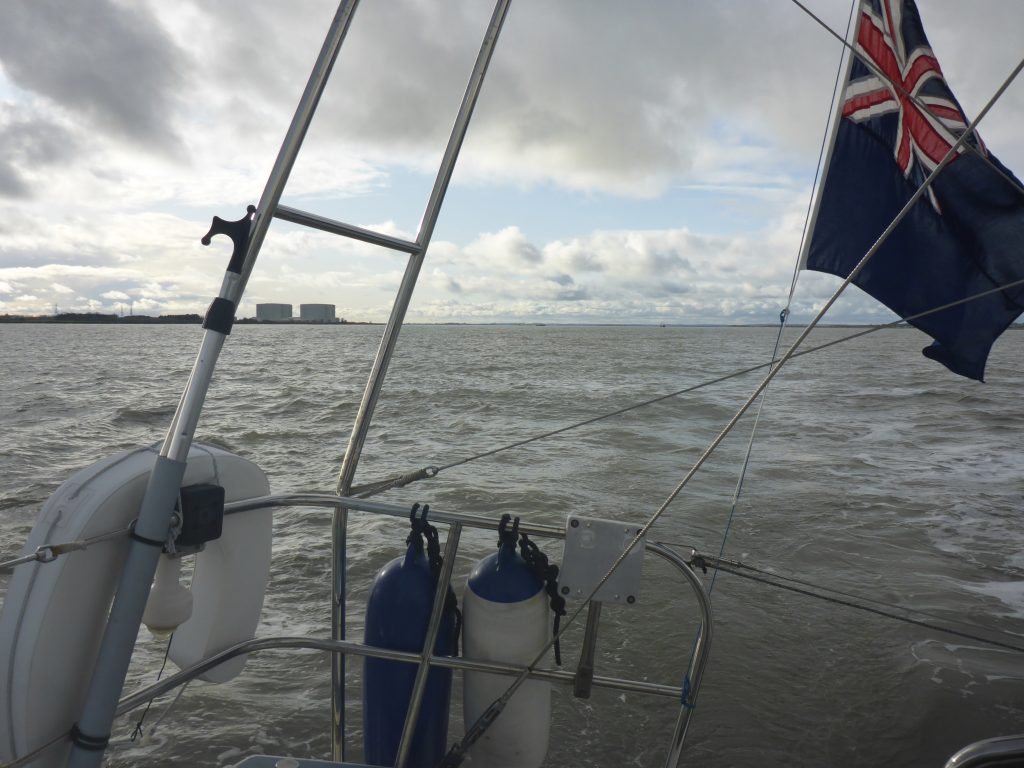 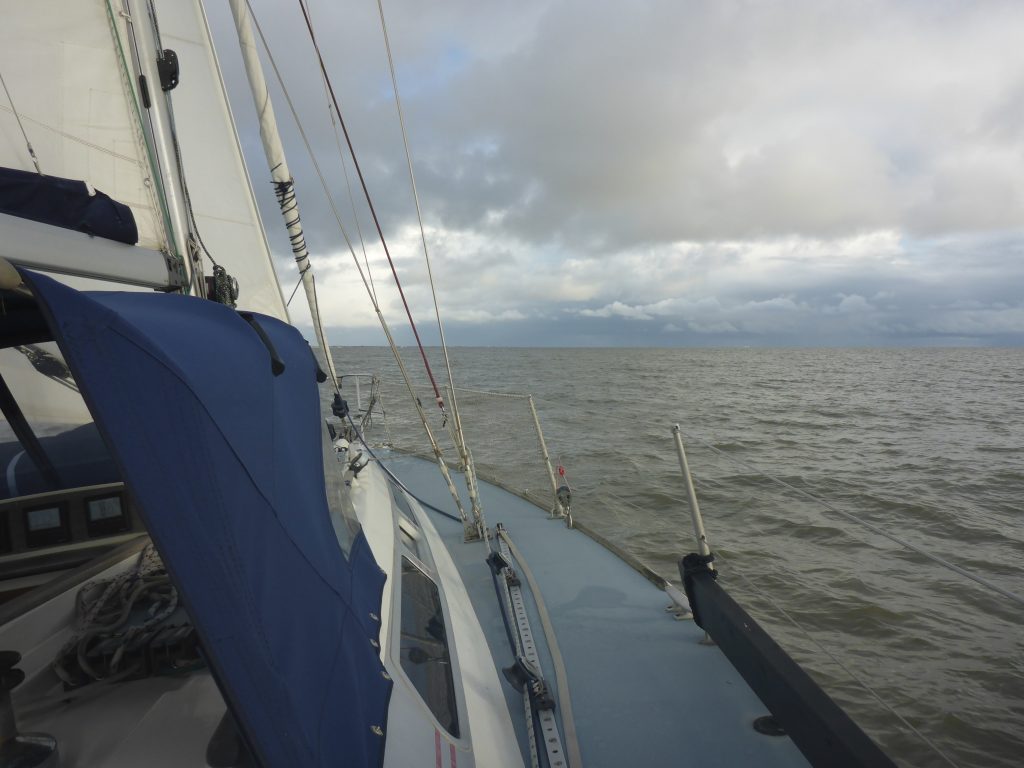 Dark clouds over Harwich to the north

There was a fabulous rainbow that seemed to ark up from Stone Point and descend to earth over Colne Point. 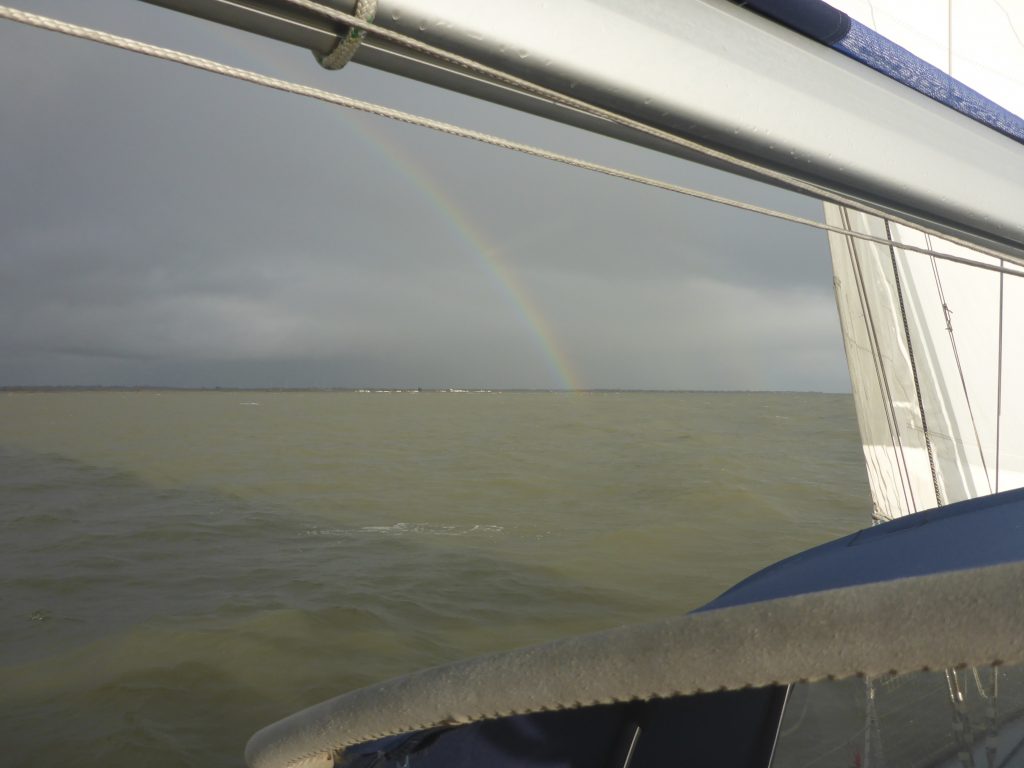 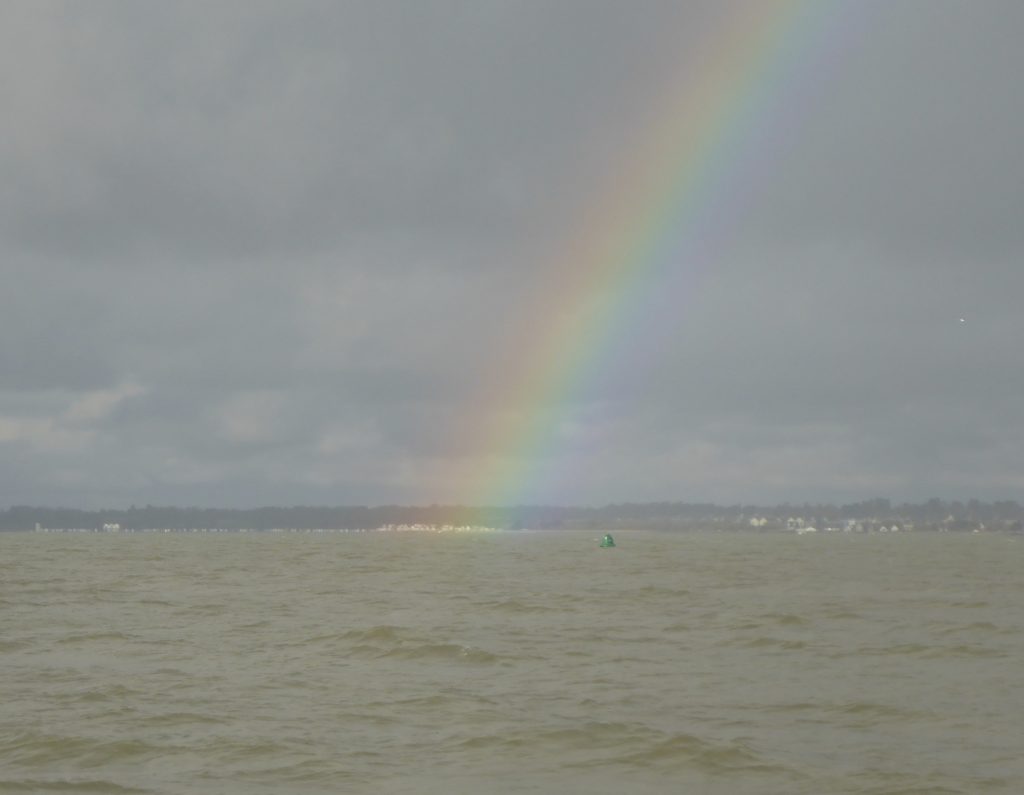 We put in a tack approaching Colne Point and tacked again on to starboard approaching Bench Head.  The wind then dropped and we were making very slow progress heading up the Wallet.  The sea state was messy and with less than 10 knots over the deck we were pretty reliant on the strong ebb for progress.

But clouds were inbound over the Gunfleet and as the blades of the wind farm started to rotate (so that’s what they’re for) I knew we would have some exciting sailing … as indeed we did. 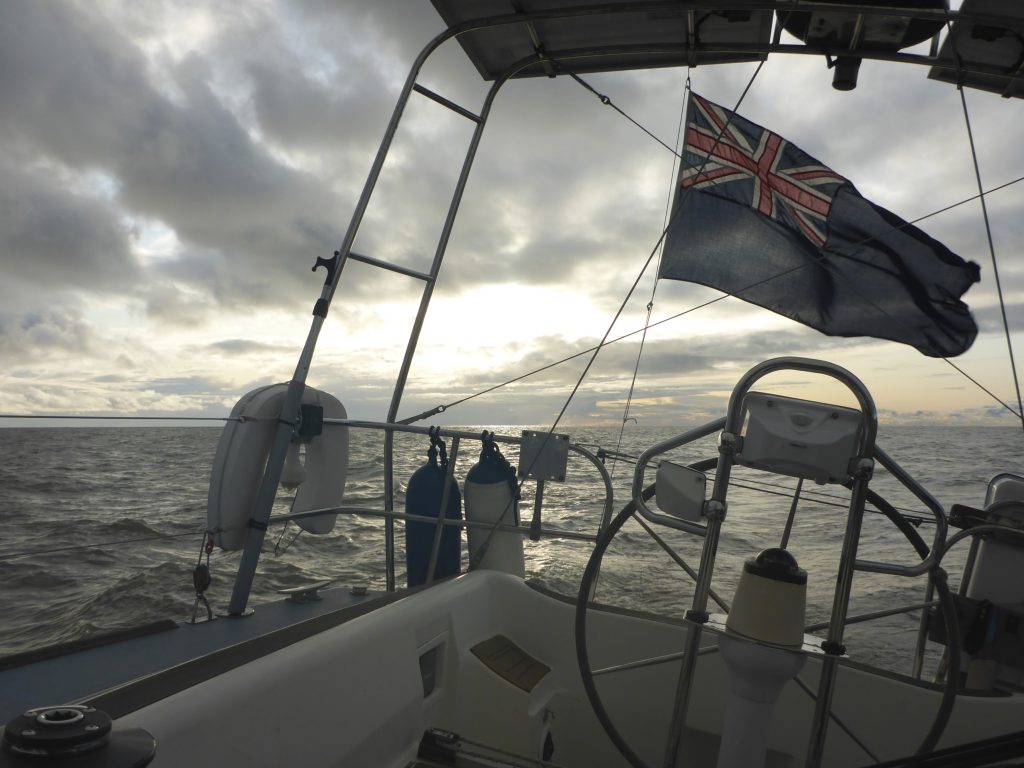 We were making 9 over the ground until we rounded The Naze and with the wind behind us I furled the head sail and sailed under main only up to Felixstowe docks. 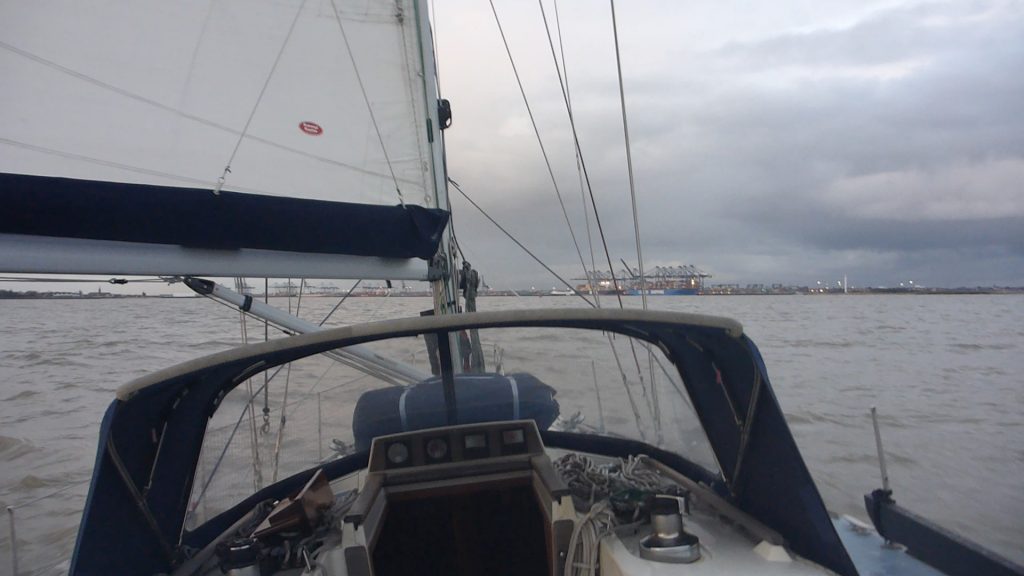 Felixstowe Docks approaches under main only 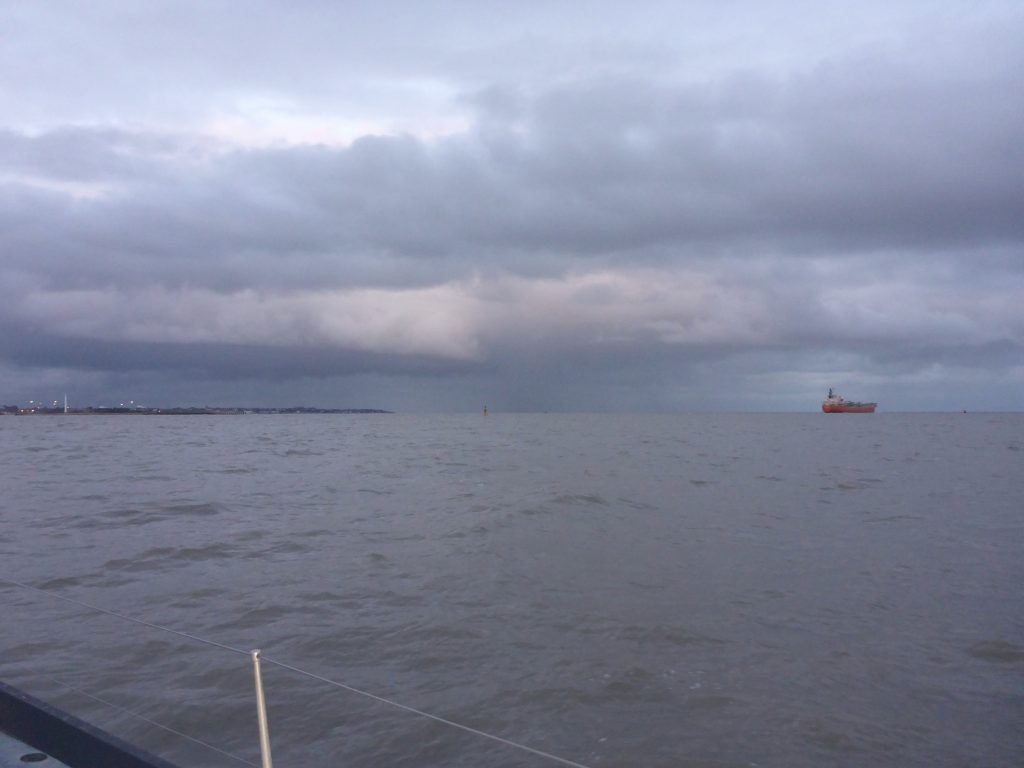 There is some north in the wind tonight and I contemplated Erwarton Bay to anchor.  But it was already very very dark and with Hapenny Pier well lit it was an easy decision.  I’d like to stretch my legs tomorrow.

There is something to be said for this winter sailing!  I absolutely love it … and no one else on the water!  What could be better?  The visibility over the last few days has been superb. 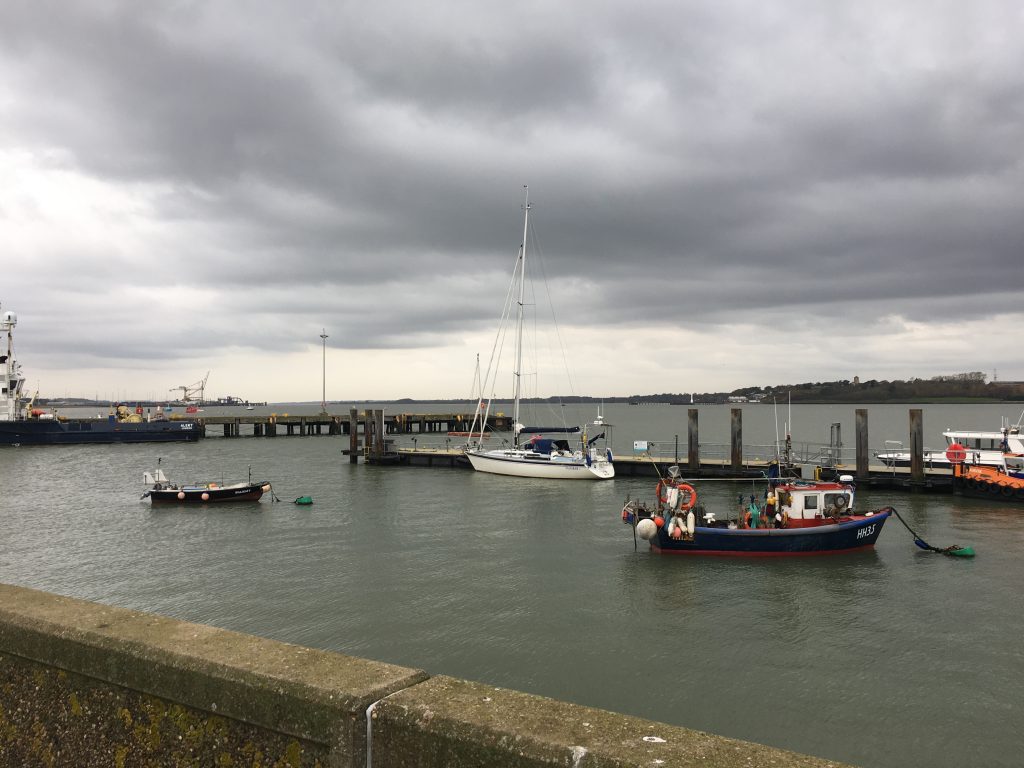 We made our way up to Suffolk Yacht Harbour and in to the west harbour on Saturday 16thNovember. 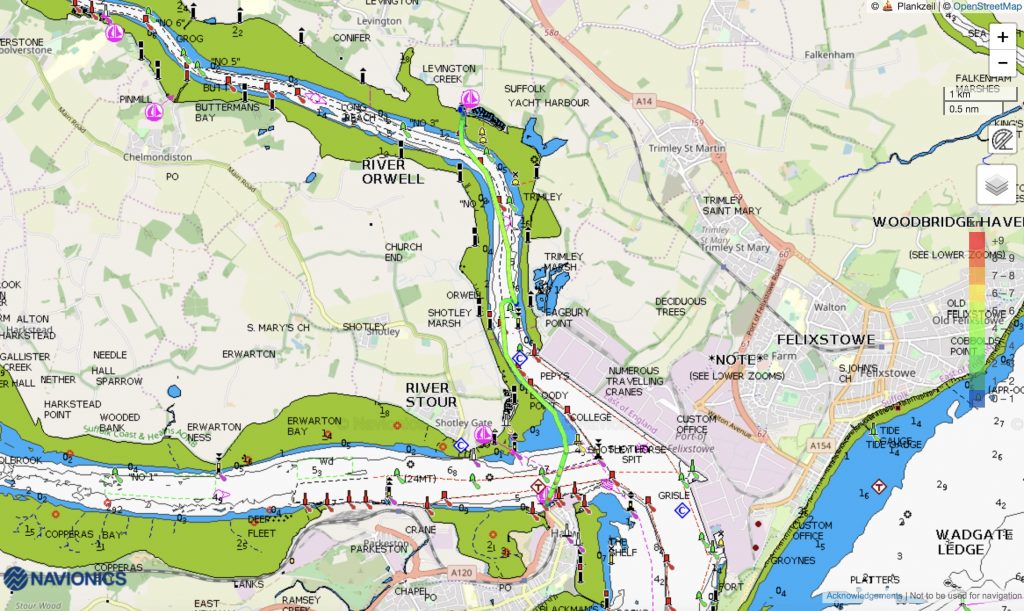 The pink Sadler 29 was anchored off Trimley Marshes.  I had a brief chat in passing.  He’s hoping to make for the continent for the winter.

‘Talisker 1’ has not moved since, although I’ve been to the boat to do some small jobs.

My 9th grandchild Quinn was born in Truro on the 26th November.  A lovely baby boy. 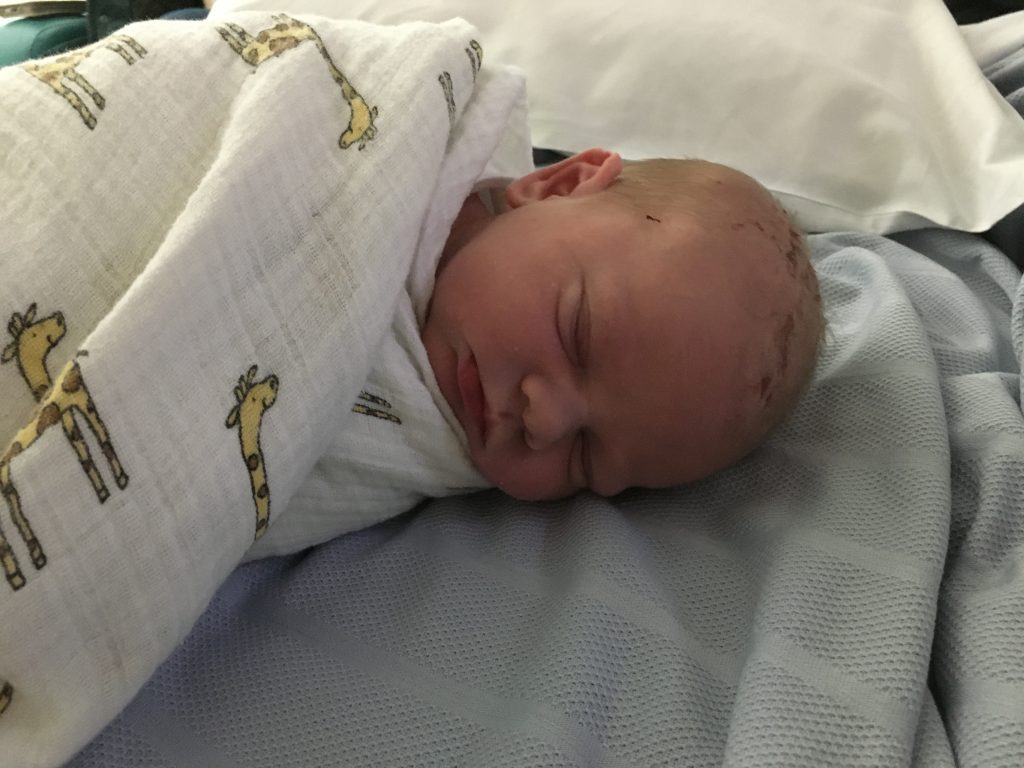 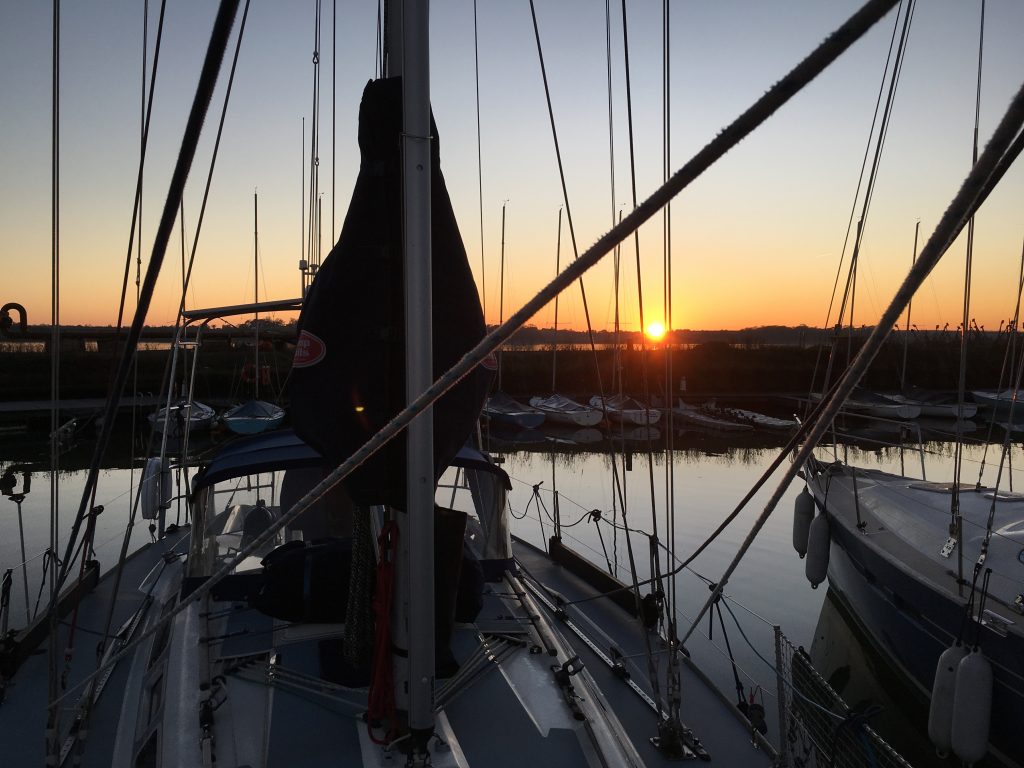