10th June: From my window seat I looked down on Nice as we crossed the coast heading out in to the Mediterranean   The sea was a mass of white horses.  We were going to turn to port fly east and then turn towards the coast before banking again to port and landing from the east.  I looked at the sea.  It was certainly rough.  A powerful Mistral had been coming down the Rhone Valley for many days with the resulting sea state reaching far out in to the Ocean.

Skipper Alex had sent me a text and asked me to fly out for the delivery from Cannes to Argentario, Italy for her next Classic Regatta.

The plane touched down late afternoon and I was soon on the bus to Cannes.  The driver was a lunatic and I really thought there would be a fatality as pedestrians jumped out of his path on the 20 minute ride to Cannes and the Vieux Port.

I got off the bus and  walked down to ‘Argyle’s’ berth.  Shoes off, and I stepped on board.  I met Jamie Bodnar-Horvath for the first time.  Jamie was going to crew on the Regatta and was making up the four that Alex required for the delivery.  Jamie had sailed ‘Argyle’ before which was great.  Term time had just ended at Cardiff  Uni and as a good sailor what could be better than sail and the Med? 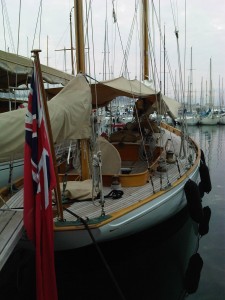 ‘Argyll’ in the Vieux Port, Cannes

Our skipper then arrived with the most wonderful large bag of cherries from his parents garden near by and then Sylvain, who like Alex is a French professional sailor looking after boats in the Med.  Alex of course is full time employed on ‘Argyle’.

Alex is very laid back, almost too much so.  But with the amount of sailing he’s done it’s possible that a touch of complacency can surface eventually and one can tire of the sort of punters he has had to contend with in that part of the world, his current boss excluded.

I speak French and Alex speaks English.  We will leave at 3 AM he told us, so a small drink and supper was required.  The boss had asked Alex to take us for supper and we ate in the same small restaurant a few streets from the harbour that we had visited the week before.  The Fish Soup was the real deal before I got my head down.

11th June very early hours: And then we were up and final preparations and choice of head sail (working jib and delivery main) and we were underway.  The wind was blowing but we were still in the lea of the land.  I gratefully took the helm in the lea of Ile Sainte-Marguerite and let the youth hoist the main with one reef.  We would have an uncomfortable motion with the wind from our starboard quarter.  Having been short of sea time for a few weeks I wanted to helm just to get my sea legs.  Rather selfish but….

And we were off and I did about an hour and half before Alex took over.  It was fairly rough but ‘Argyle’ was easy on the helm at this stage.  She’s so big, powerful, heavy and steady.  The wind was blowing about 5 to 6 but the boat was marvellous.

Jamie and Sylvain were a little tender at this stage and I would have been too but for helming.  Then there were Dolphins at dawn and most seemed to be port side.  They stayed for 25 minutes and I loved it.

‘Why on the port side?’ I asked Alex.

He’s very French is Alex and there were a lot of theories before he finally said they might be wanting the boat to turn away from their young ! Bernard Moitessier said that happened to him although under different circumstances!  The great Bernard said they wanted to save his life and that they were sending a warning to him.  They dolphins stayed some time enjoying the sea state as ‘Argyle’ powered along. Alex also said 25 minutes was quite a long time for dolphins to stay with a boat.

Jamie and Sylvain took over and I was straight in to my bunk, lea cloth hard at work, and I got some sleep.  I had been wearing gear I would expect to wear in the UK when it’s cold.  Thermals, mid layers and oilies + gauntlets and balaclava.  Well worth packing proper off shore gear… 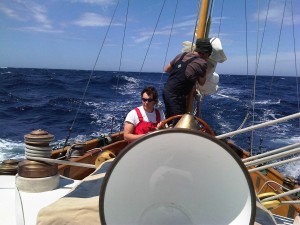 Jamie and Sylvain take over 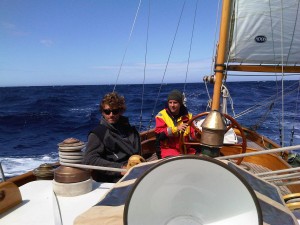 Back on deck and with Jamie and Sylvain off duty Alex and me did 30 minutes each for about four to five hours until we were passed the Cape.  The sea was big and the wind was getting up properly.  ‘Argyle’, of course, was taking it in her stride and then Cape Corsica was in sight, but of course hours away, even though we stomped along, touching 10 knots through the water most of the time. 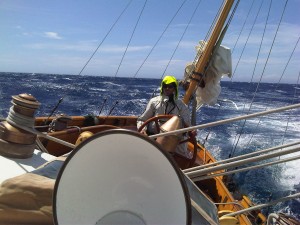 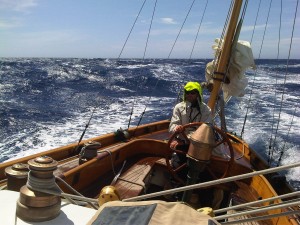 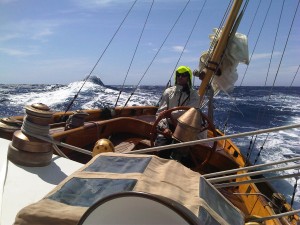 Alex …. take a photo!  Well, I did take a photo of him.  The skipper at the helm and 40 knots of wind on the approach to The Cape.

Helming was hard work but exhilarating   We had 40 + knots of wind and big seas with the Cape approaching.  Jamie and Sylvain were back on deck as we passed between Ile Giraglia and the main island.  The astonishing thing was to see another vessel for the first time since we had left Cannes.  Unheard of for this to happen in the southern North Sea! 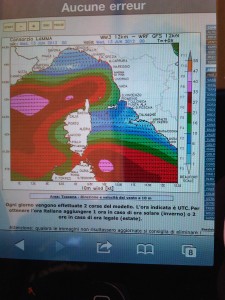 The weather system on Alex’s iphone

In the lea of the island and suddenly nothing.  The sea flattened and we even motored for a short time.  Alex was in the galley and came up with a fantastic filling potato cheesy grilled supper.

‘I think we deserve this after that!’ he said as an understatement.  Nothing had been difficult but helming in those seas had been very hard work. 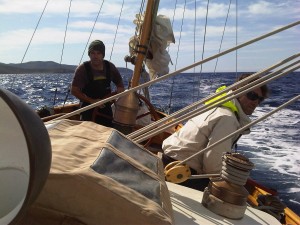 Sylvain at the helm with the Cape behind us.  The skipper is about to head for the galley. 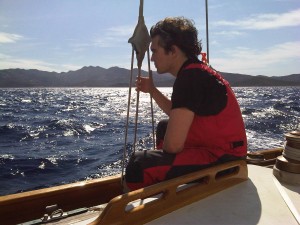 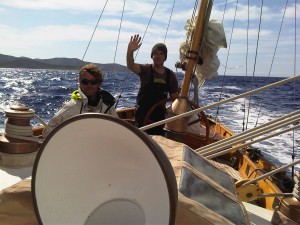 All fed and we left Jamie and Sylvain until midnight when I woke for my next watch.

12th June: The wind was up again and with a little traffic as we neared the Italian mainland we had to keep our eyes open wide.  At 4 am I was back in my bunk.

We arrived in beautiful Argentario at about 05.30.  We were the first of the classics to arrive for the Regatta. 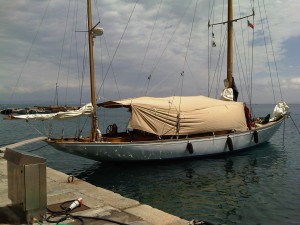 The fist boat to arrive! 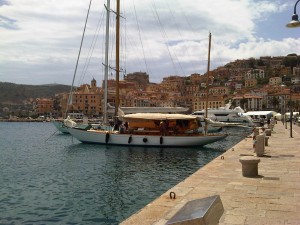 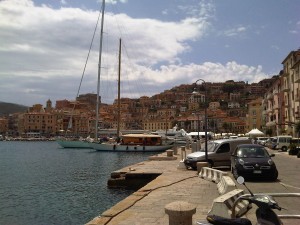 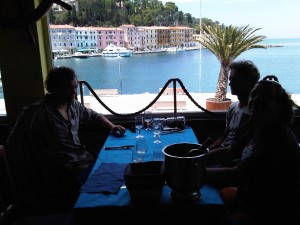 A much needed lunch with ‘Argyll’ in the background 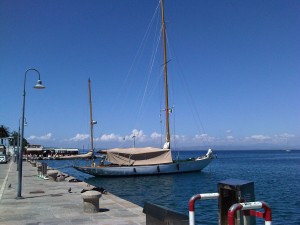 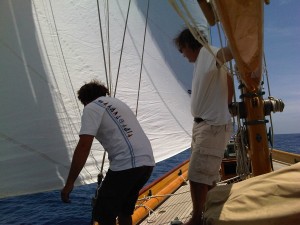 The following day and race crew were arriving.  We went for a sail.  Brother Henry right. 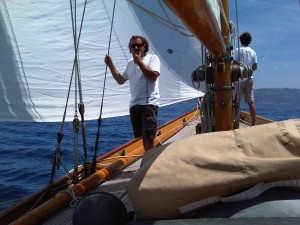 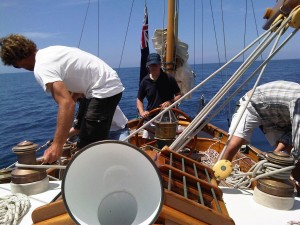 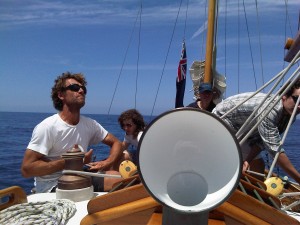 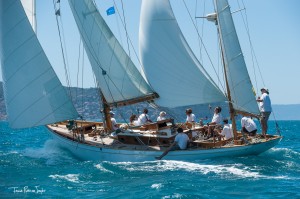 I stayed for the first race and I’m out of the way looking after the mizzen sail far right.  Brother Henry is 3rd from left. 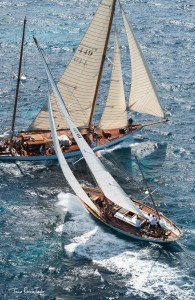 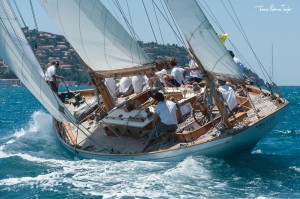 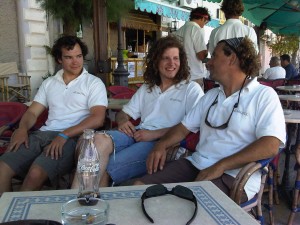 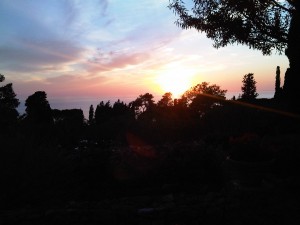 Some place to spend my 56th birthday organised by brother Henry.  Above Porto Stefano. 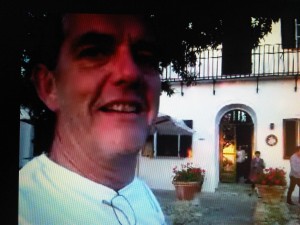 A wonderful brother wishing me a Happy Birthday 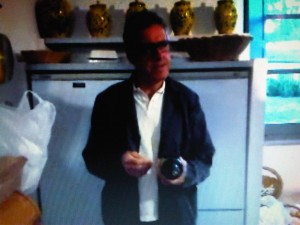 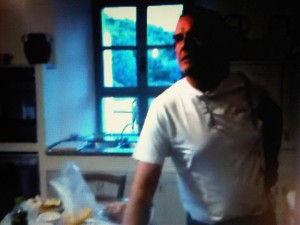 The following day a train to Rome and a flight home.  ‘Argyle’ had three more successful four days racing.  There was no wind for the voyage back to Cannes.