Me n ‘Talisker 1’ are in Brightlingsea Harbour.  It’s windy.  SSW. We will leave at HW Brightlingsea today and head up the Wallet.  It should be a fast sail with a strong ebb up the coast.

Last night it was uncomfortable at anchor in Pyefleet.  I decided on a quiet night on a pontoon. I’m pleased with that decision.

On the 1stAugust I sailed round to Suffolk Yacht Harbour for a haul out.  I have problems with the winter work. 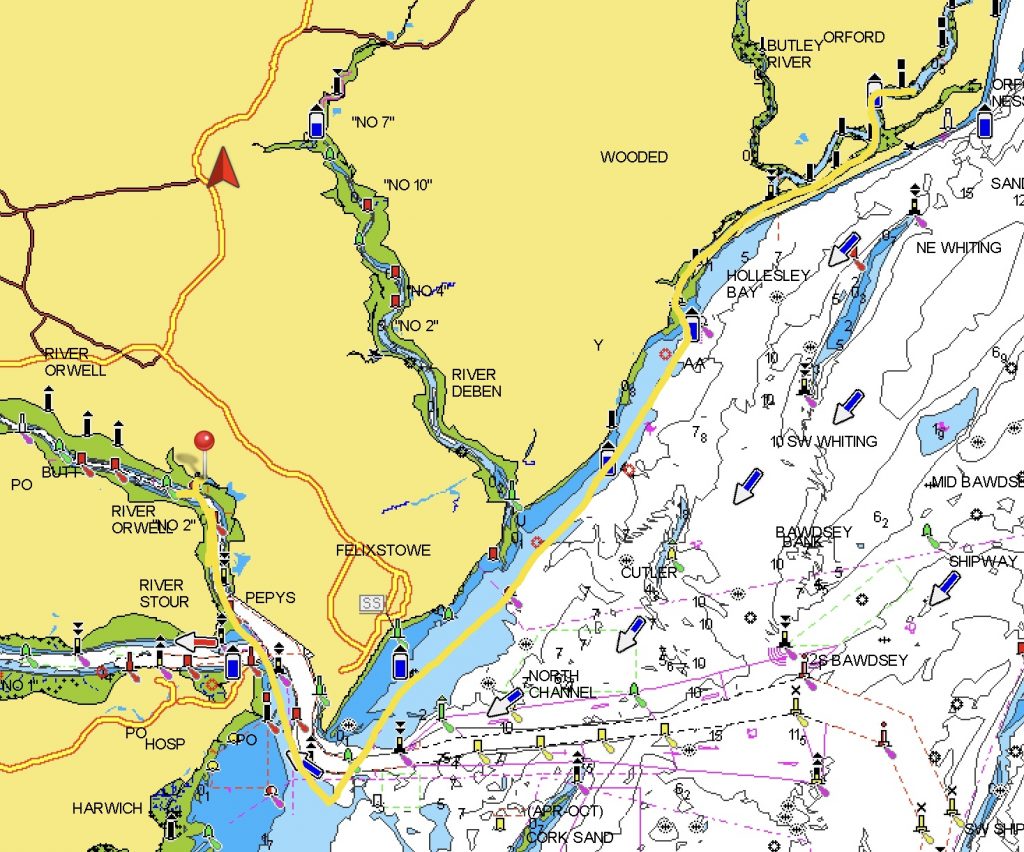 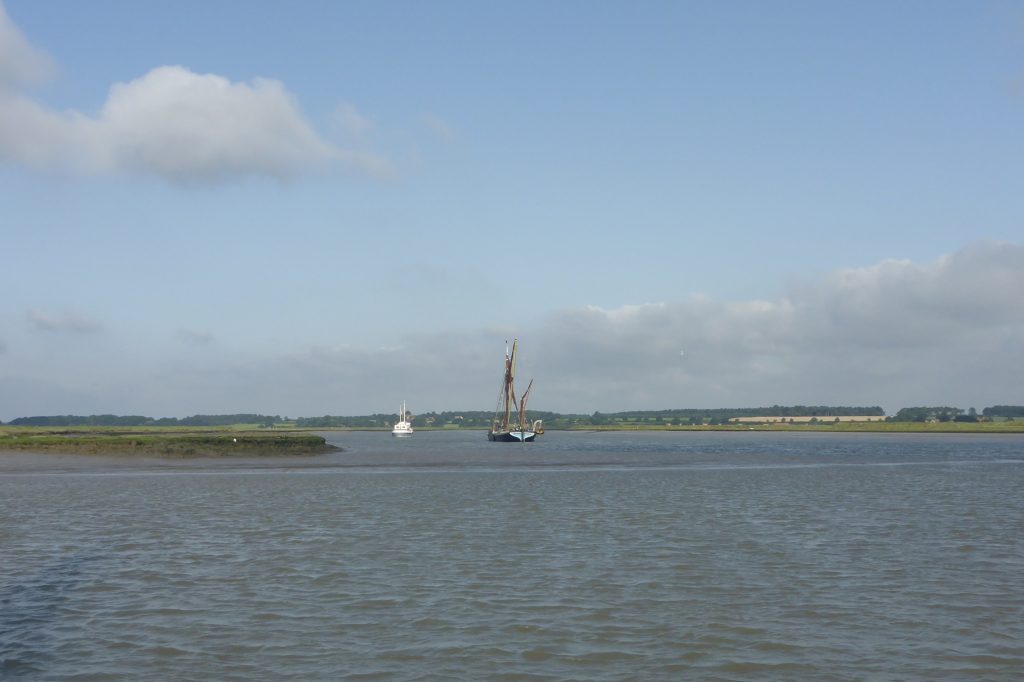 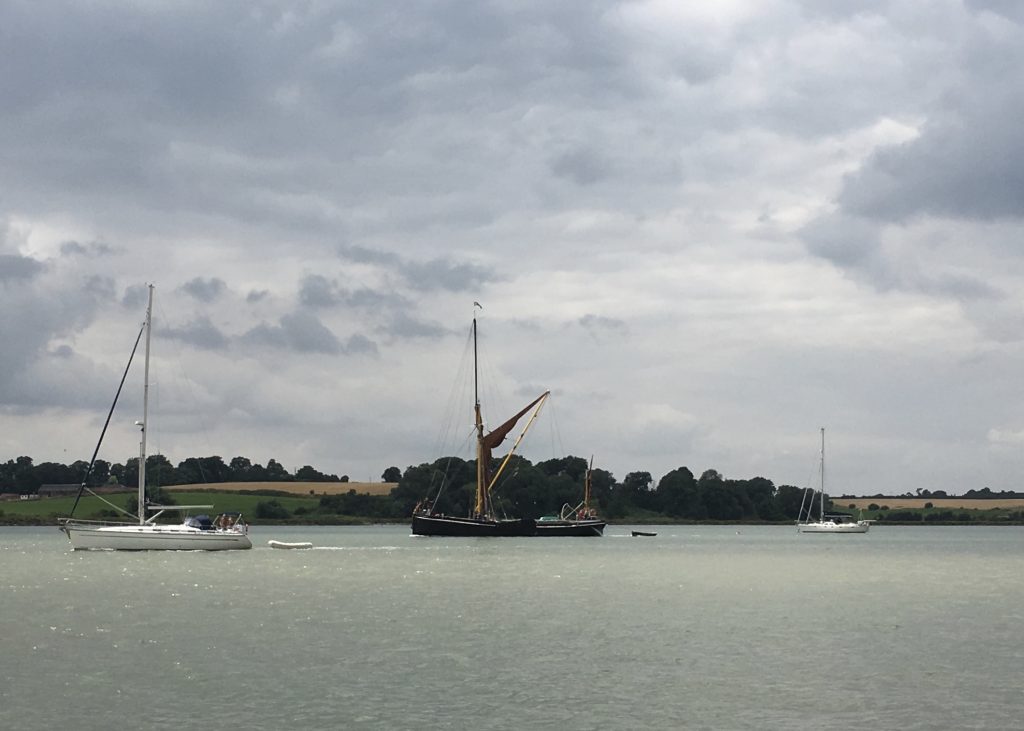 Heading in to The Orwell 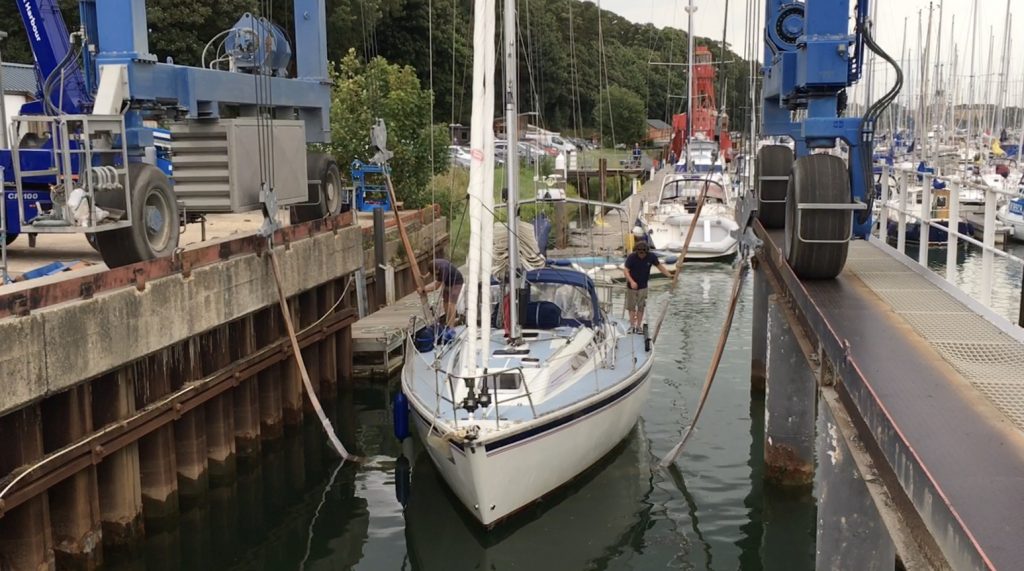 In very good hands! James and his team in Suffolk YH prepare to haul ‘Talisker 1’ out of the water.

With a very flaky bottom I decided last winter it was time to take her back to the original gelcoat.

Below the waterline ‘Talisker 1’ was professionally sandblasted back to the original gel coat and then prepared by the shipwrights at Suffolk Yacht Harbour for me then to carry out the next stage.

With specific advice from the yard I applied 4 coats of International Gelshield 200 to everything below the waterline, except the skin fittings.

I then applied 2 coats of Hempel Underwater Primer to everything below the waterline including the skin fittings followed by a coat of Hempel Hard Racing Red Antifoul.

I applied another coat of red hard antifoul to the boot top and about 5” of Hempel Hard Racing Blue Antifoul below that. This system has allowed me to scrub the waterline while the boat is in the water.  For many years the boot top has stayed beautifully in tact and has never failed.

I then applied 2 coats of Seajet 033 Shogun soft blue antifoul below the boot top.

‘Talisker 1’ was launched late on the 16thApril.  The last coat of grey gelshield, the 2 coats of underwater primer, the hard and soft antifoul was applied in good weather during April with a minimum of 24 hours between each coat.

After launching I noticed that the red and blue racing antifoul on the boot top and just below had started to fail to adhere and grey patches were starting to appear.

Hauled out and lightly pressure washed Suffolk Yacht Harbour diagnosed that the Hempel Underwater Primer had not adhered to the gel shield.  The gelshield was found to be sound. 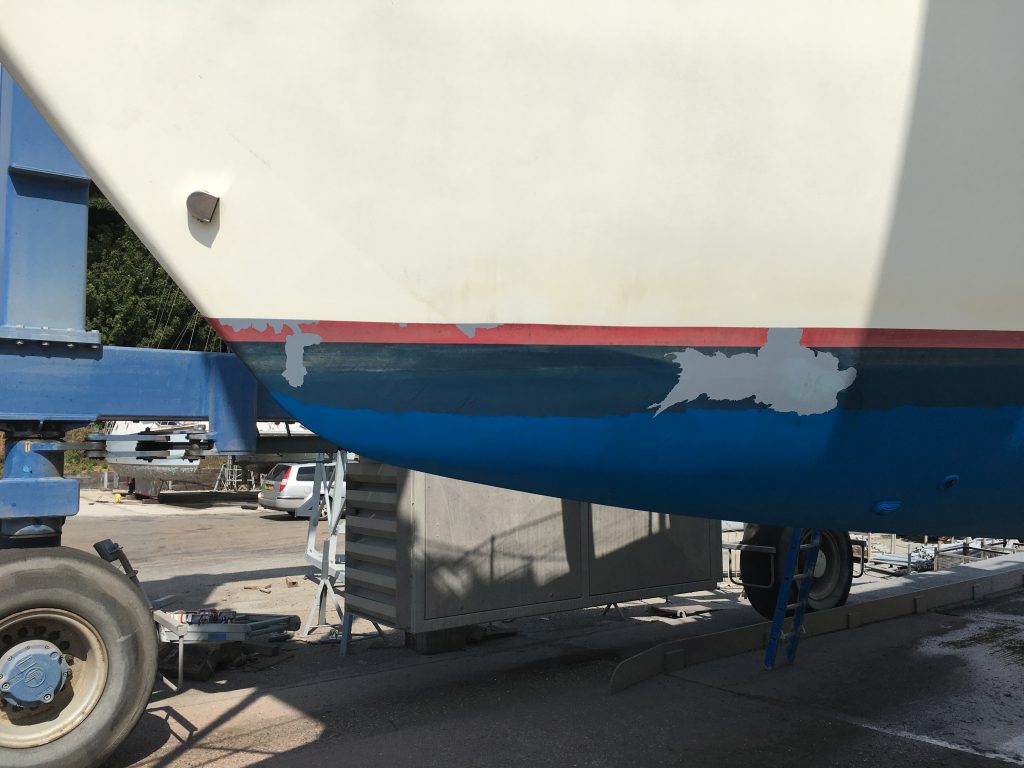 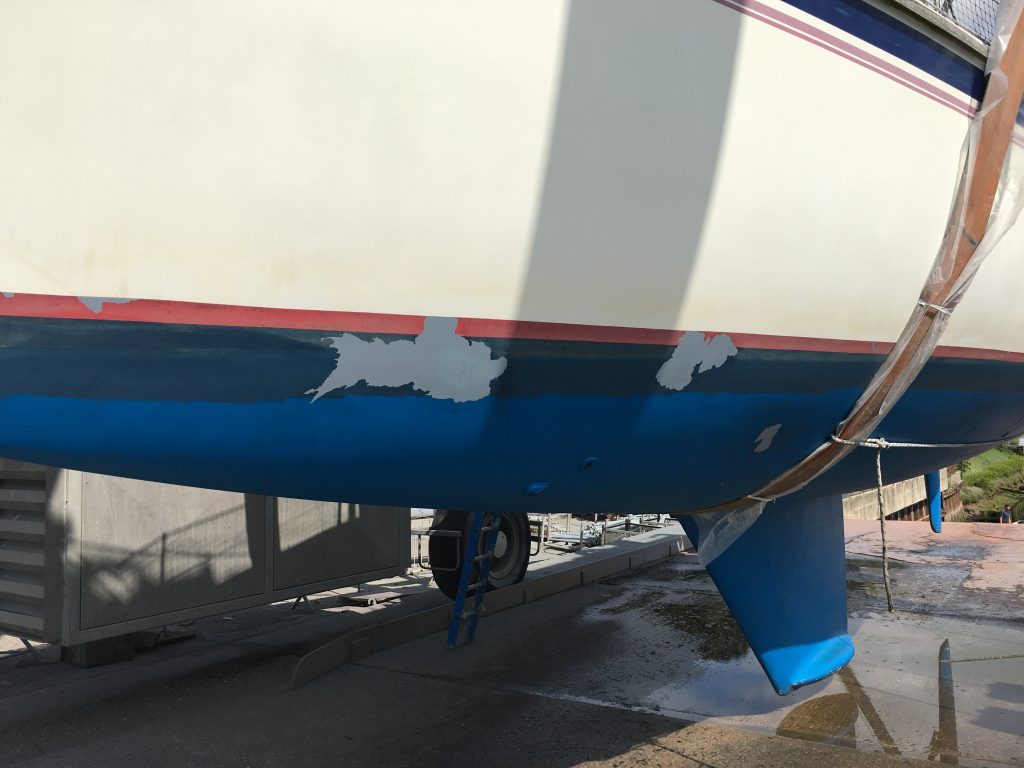 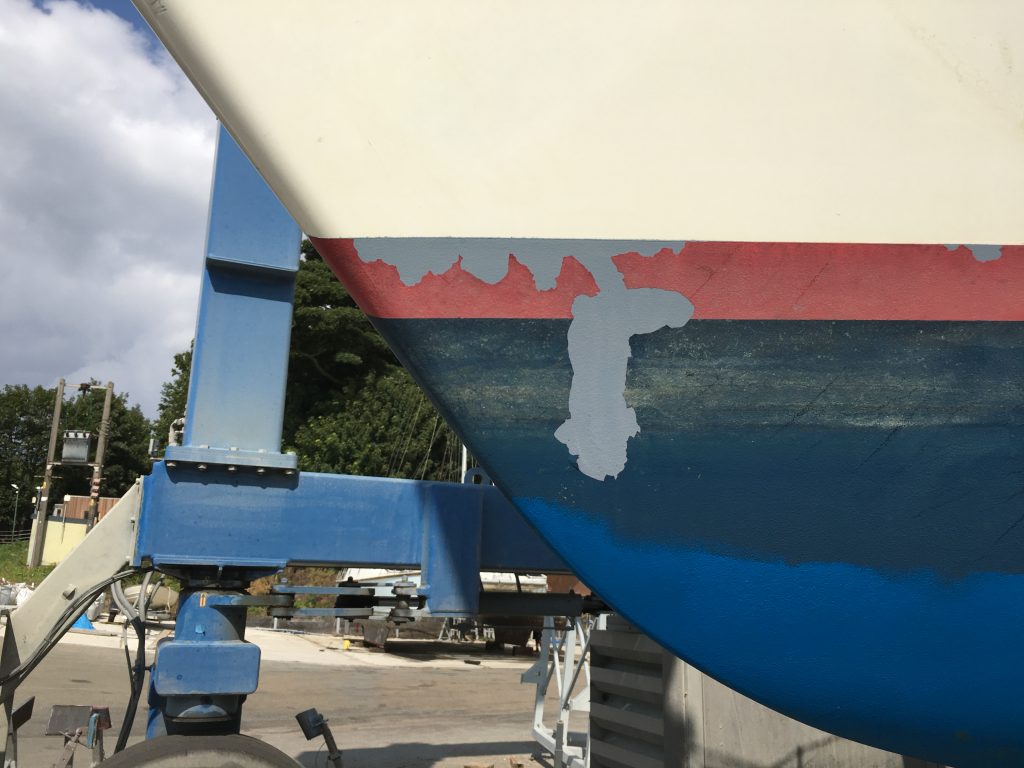 Much more came off during the pressure wash. I posted samples of the flaked paint to Hempel with a detailed explanation of what had been done, including photographs.

Hempel were marvellous and came back with a full and carefully written reply.  It’s my fault.  Some of you will know what I did wrong before reading further.  The last coat of gelshield has to be still tacky when applying the first coat of underwater primer OR, if the gelshield is dry it needs to be carefully sanded (wet and dry) and washed down to create a key for the primer.  Having spoken to a few trusted friends, some of them (among them single-hander Peter Buchan) knew immediately what the problem was.

I was relaunched the same afternoon.

Simon Abley came and had a blast in the river before we returned to Suffolk Yacht Harbour. 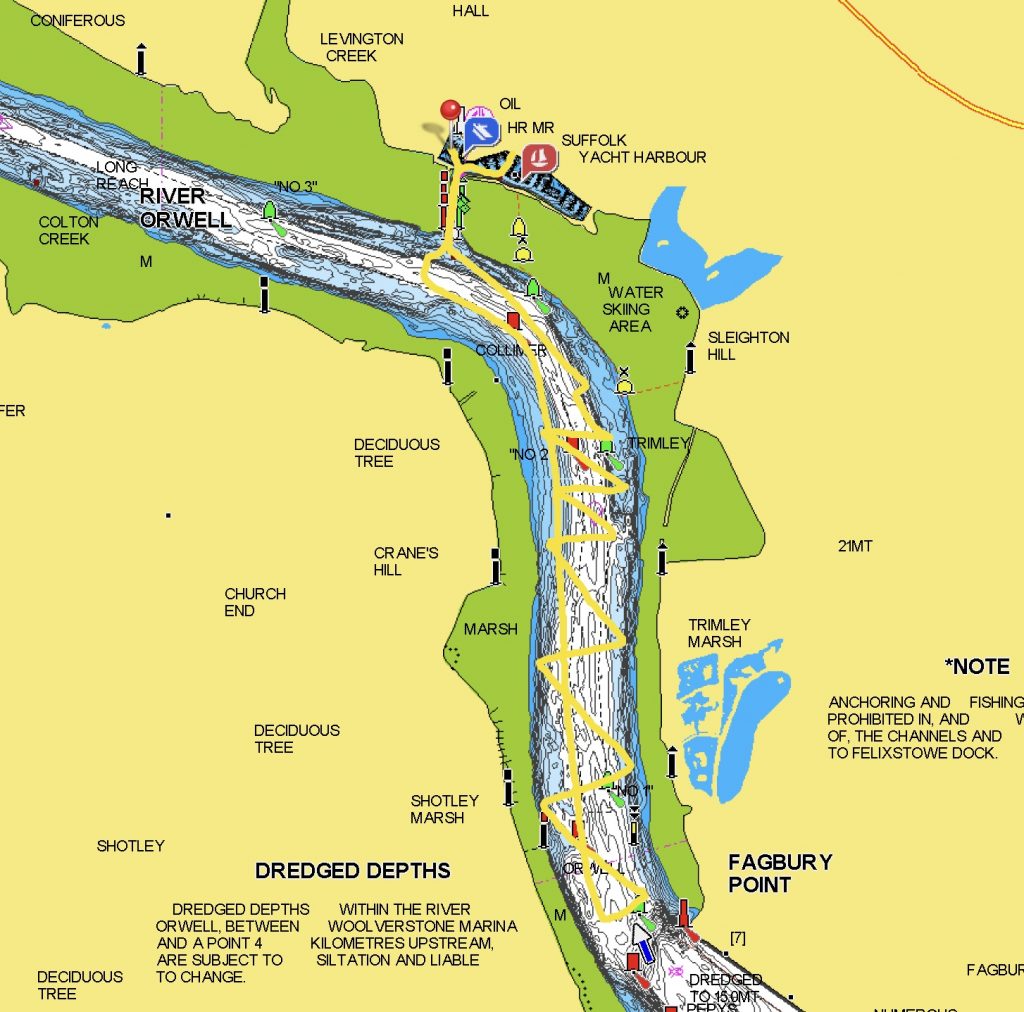 Out for a sail with Simon 1st August

The following day me and ‘Talisker 1’ sailed down river and in to Felixstowe Harbour.  We met Doc and ‘Tuesday’ by the Guard Buoy.  We sailed in to the Orwell and then back down river, in to the Stour and up to Erwarton Bay to anchor for the night.  It’s always fun watching Doc handling ‘Tuesday’. 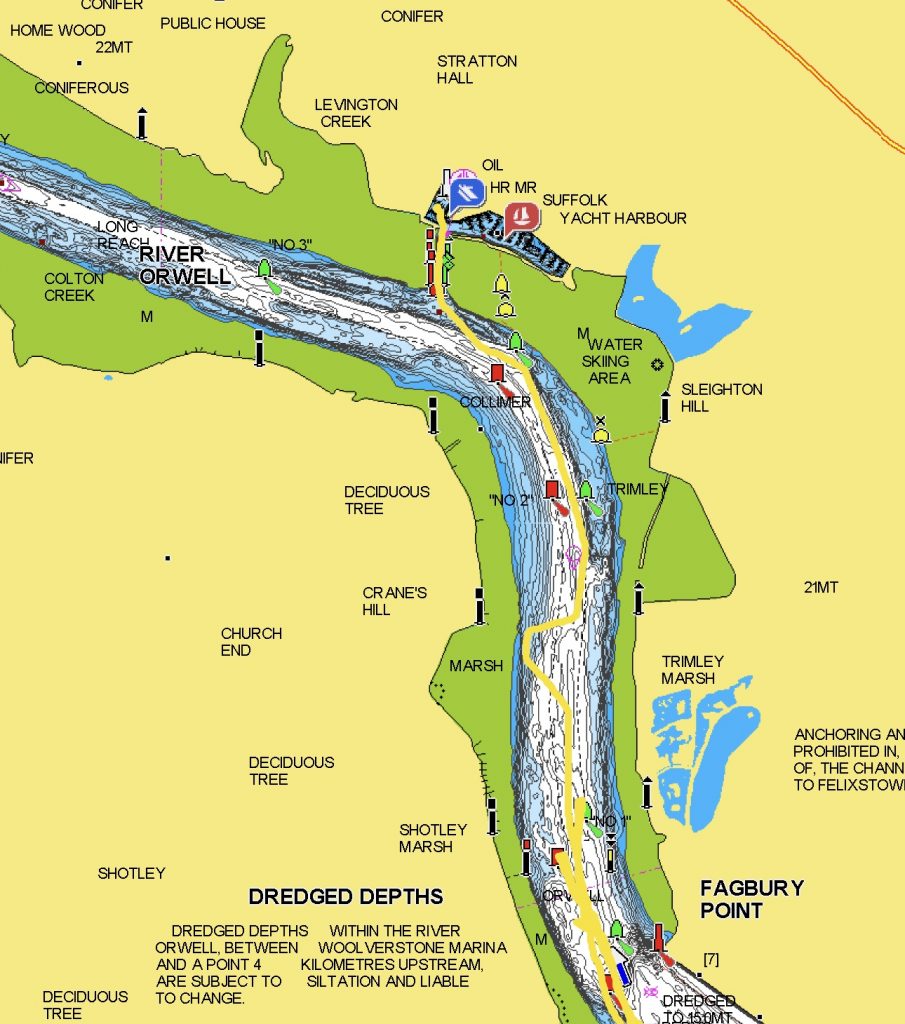 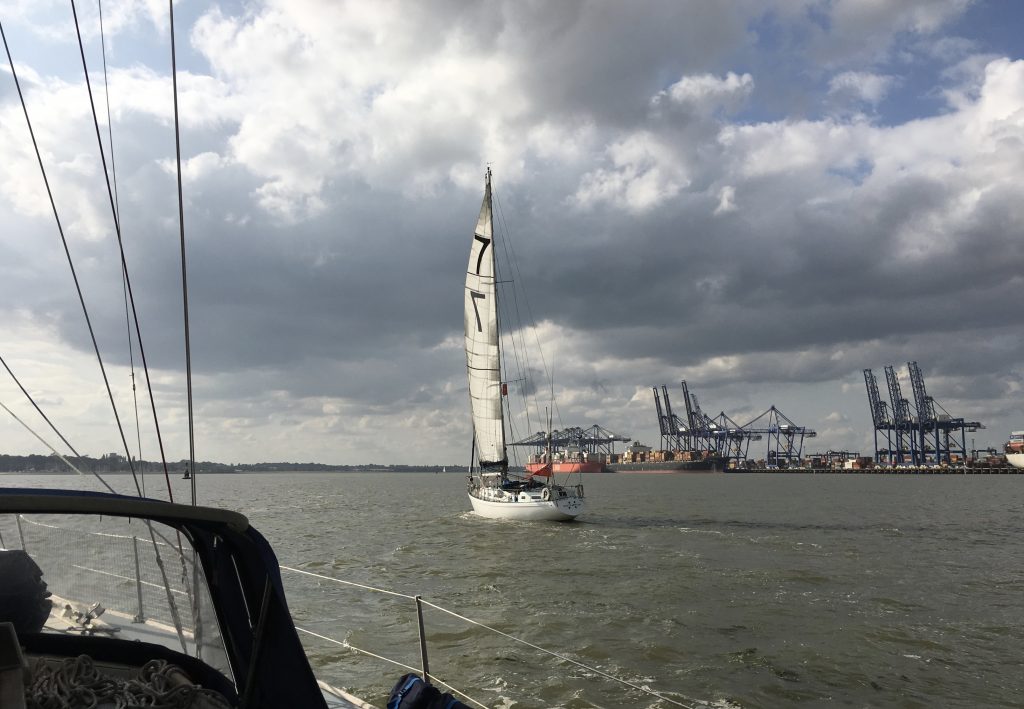 Doc and ‘Tuesday’ arrive in Harwich Harbour from Orford 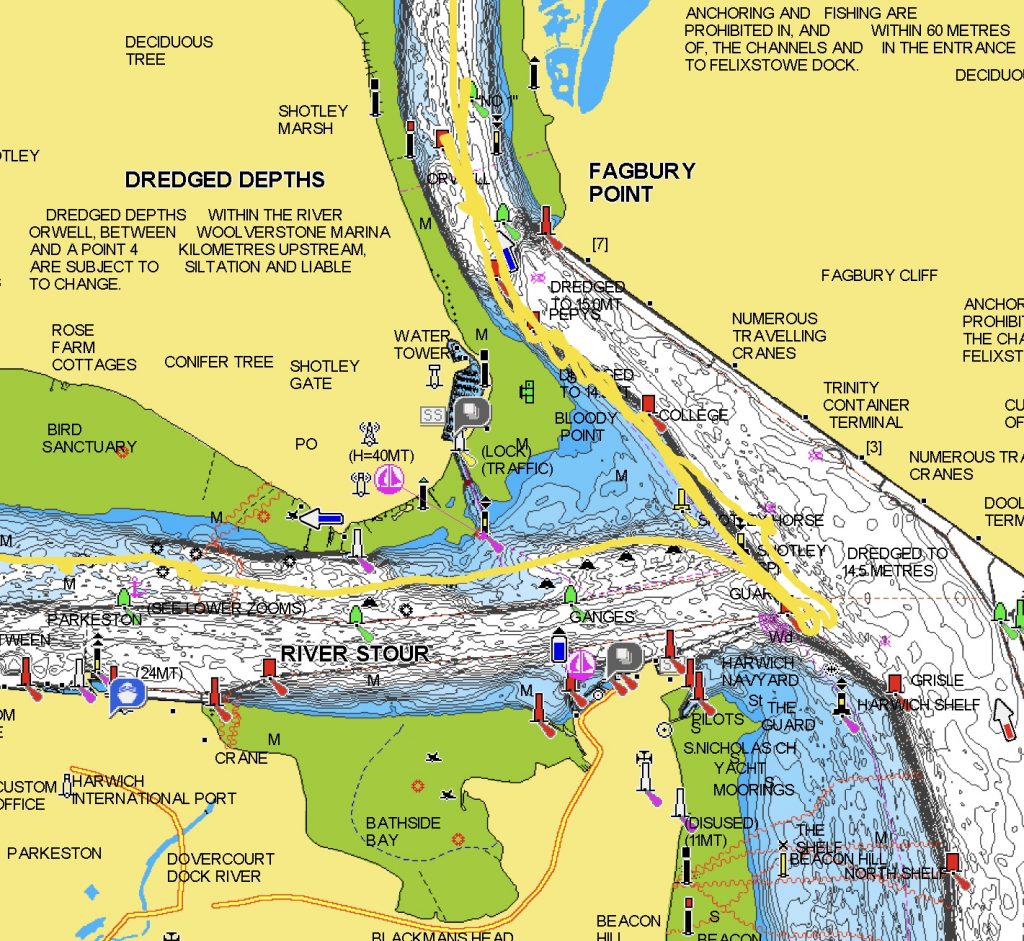 A sail in the harbour with Doc (2) 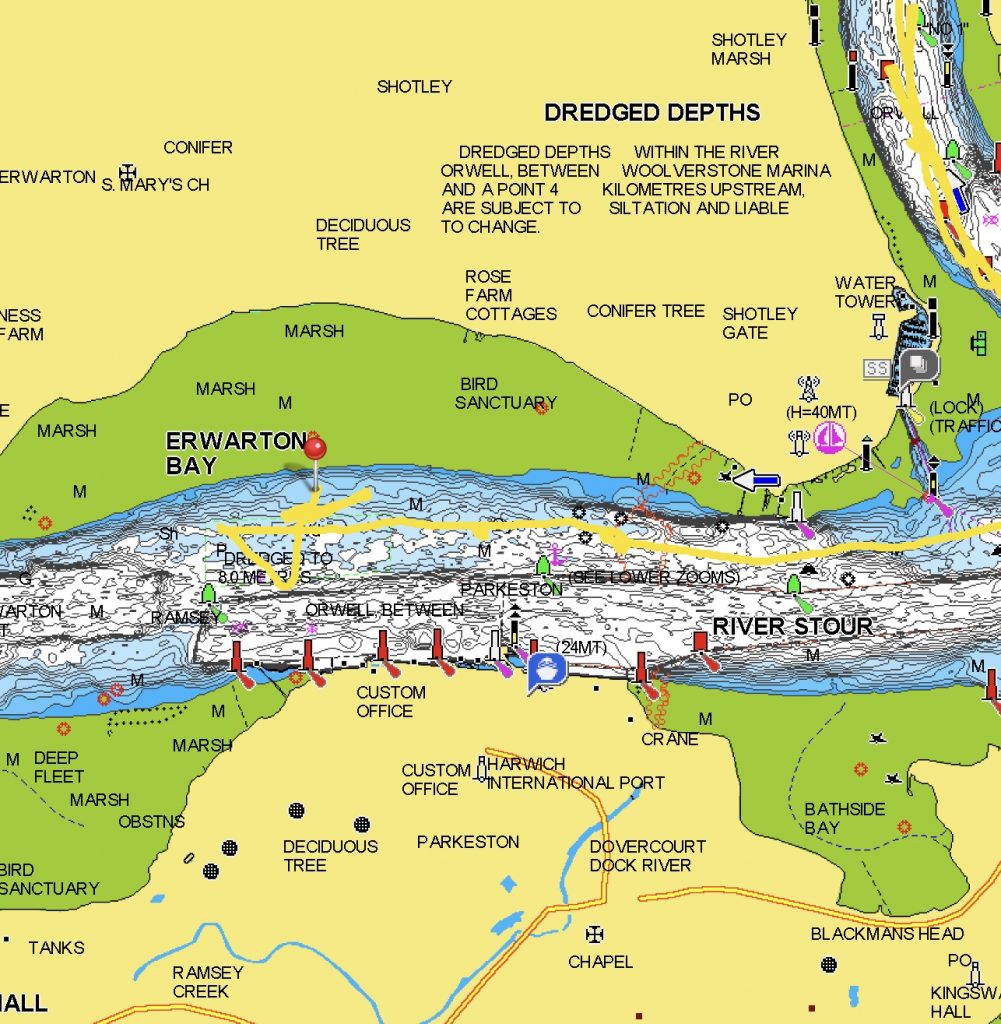 And up to Erwarton Bay to anchor (3) 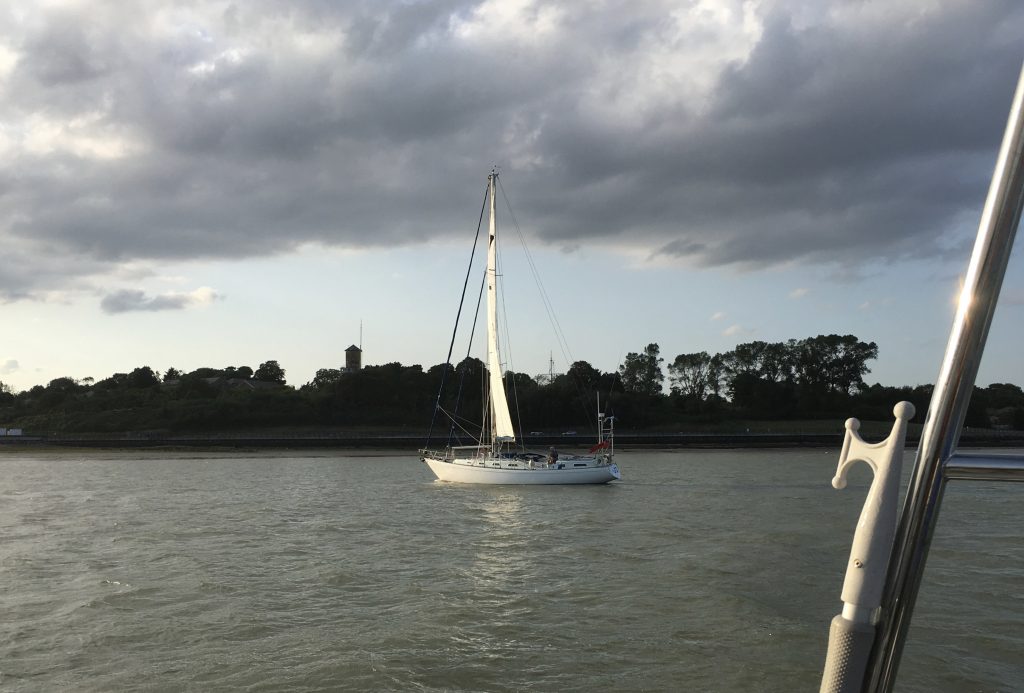 ‘Tuesday’ heading up the Stour

I woke to a mirror calm on the 3rdAugust. 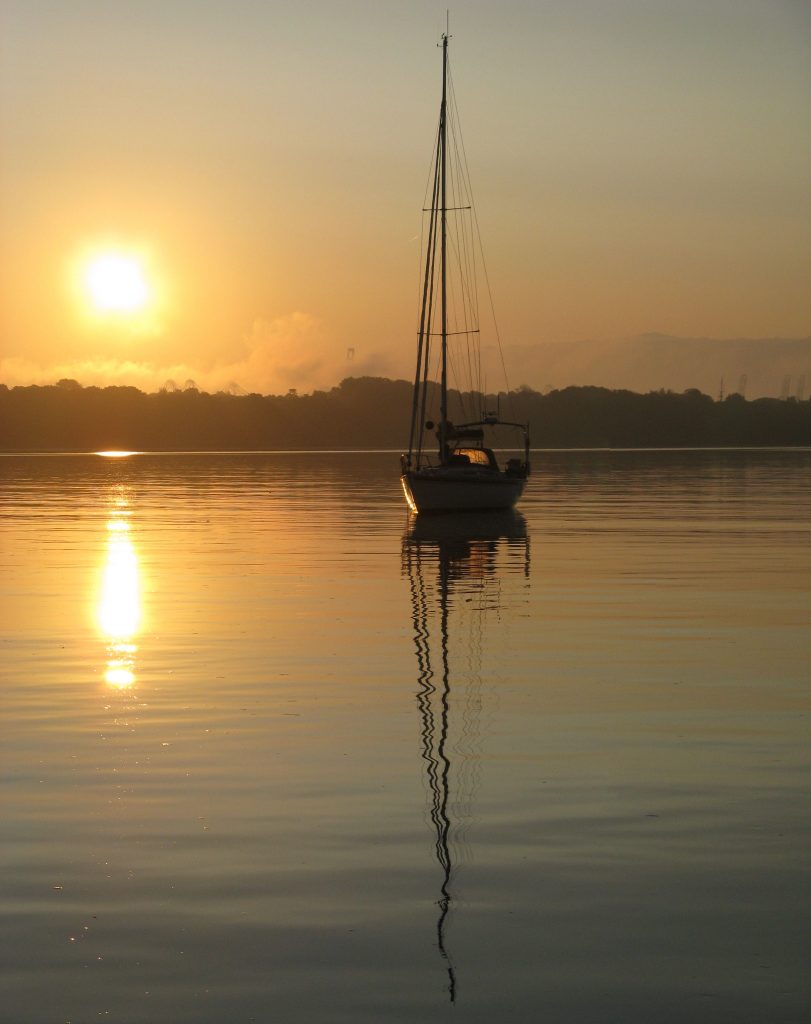 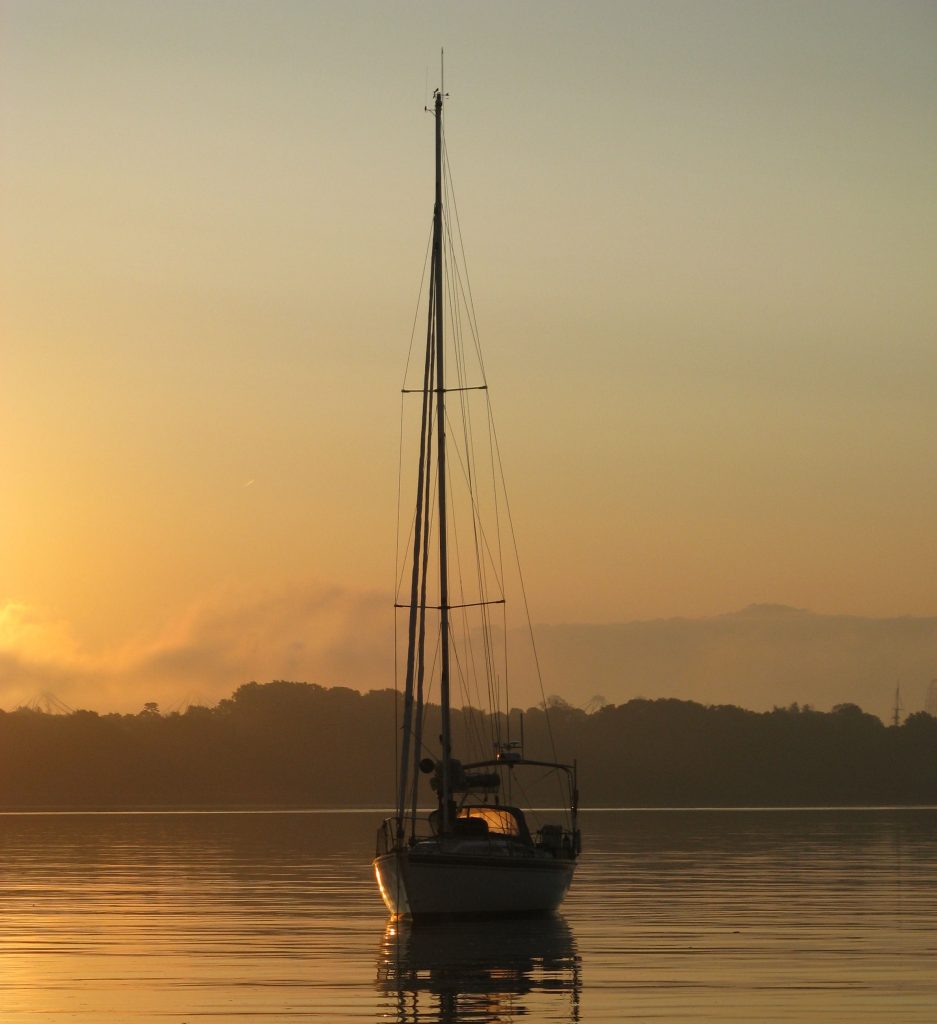 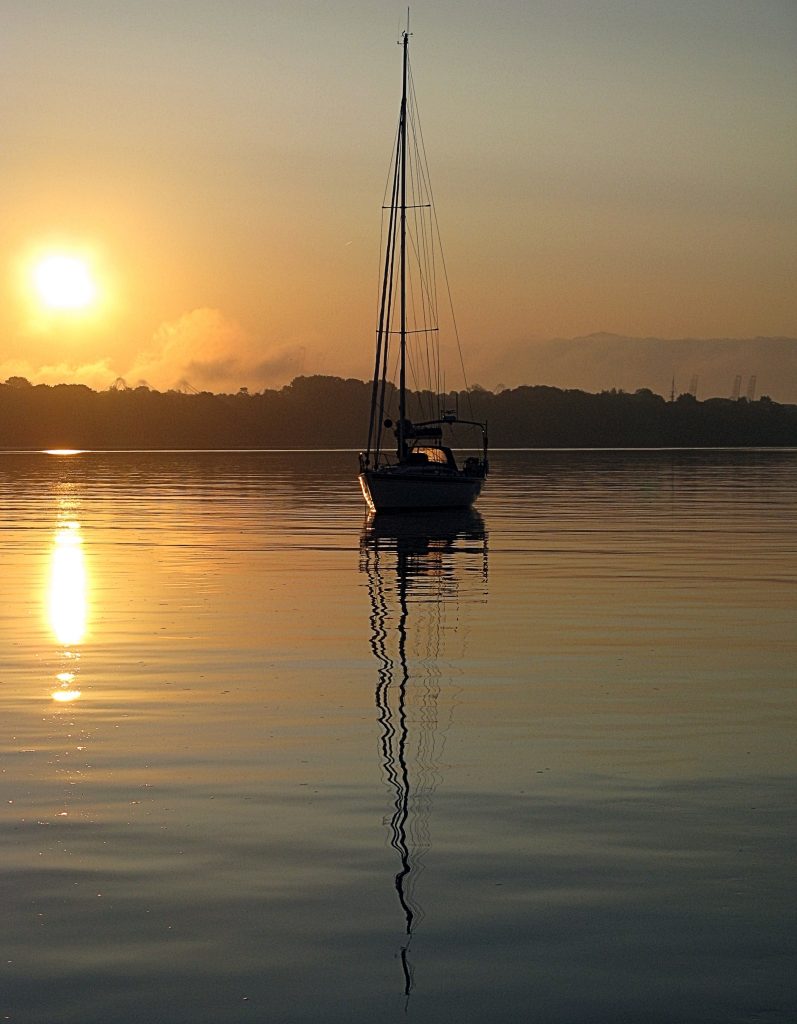 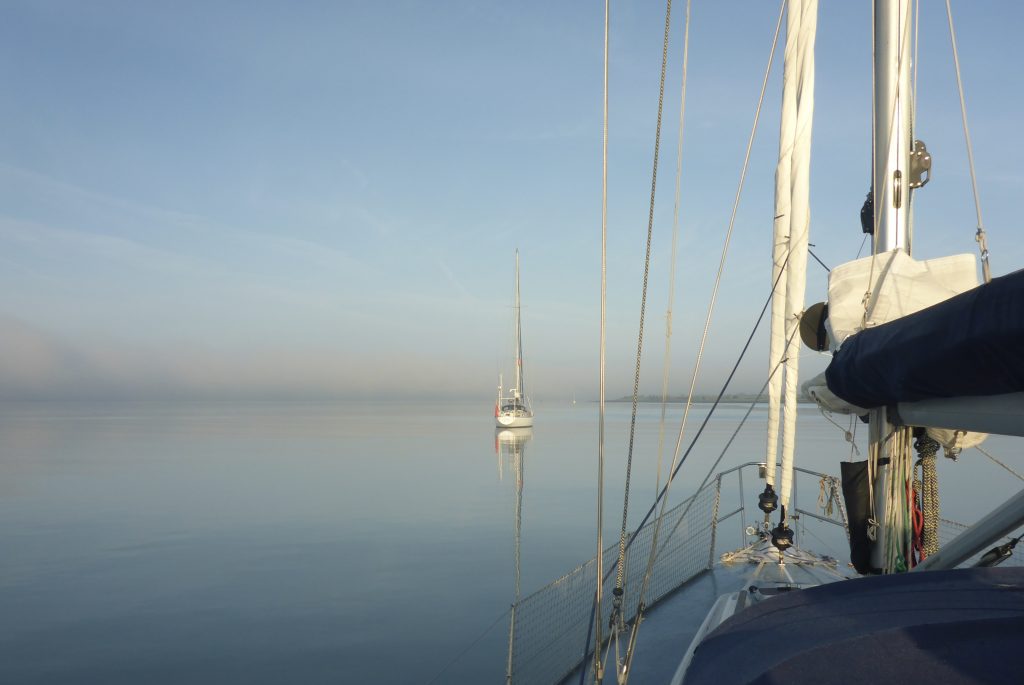 Both boats took the last of the ebb down to Harwich.  A light north easterly breeze disturbed the surface of the harbour and we set sail, switched the engine off and ghosted out in to the Medusa Channel with the intention of sailing slowly to the Blackwater. 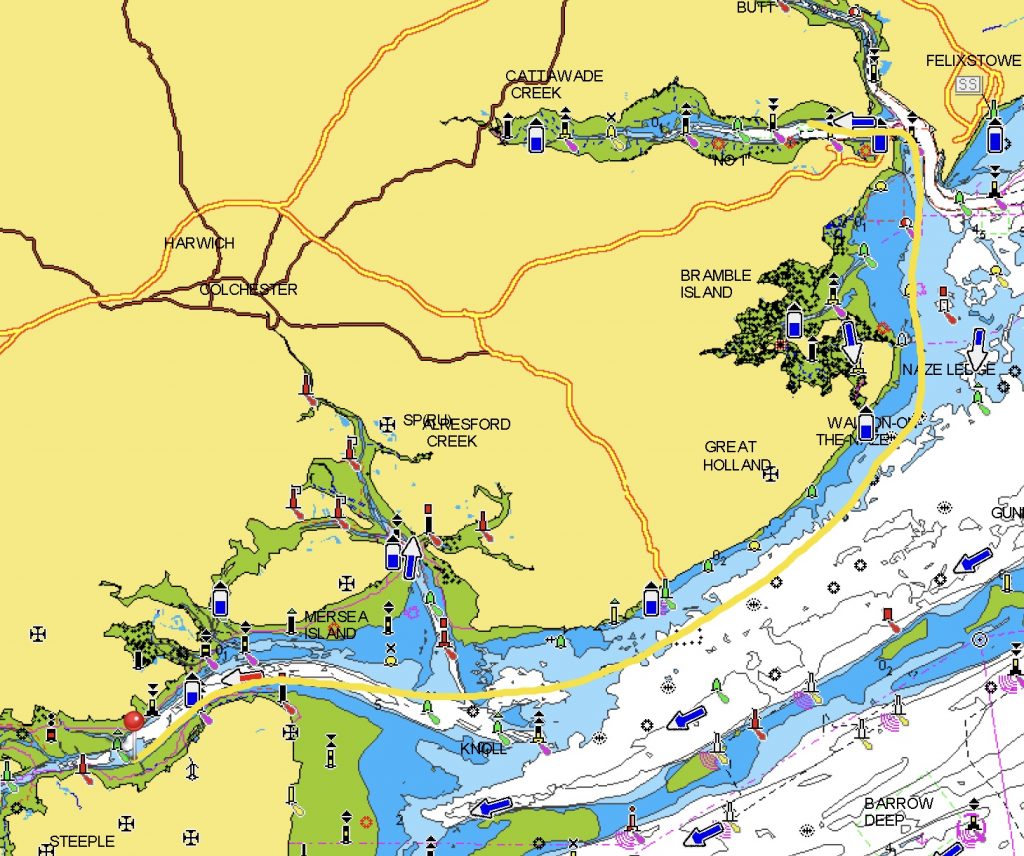 The Stour to The Blackwater in very light airs 3rd August

Bang on Springs we had the flood all the way. Approaching Clacton the wind finally veered to the east and south east and with it, enough breeze for a lovely finals in to the Blackwater. 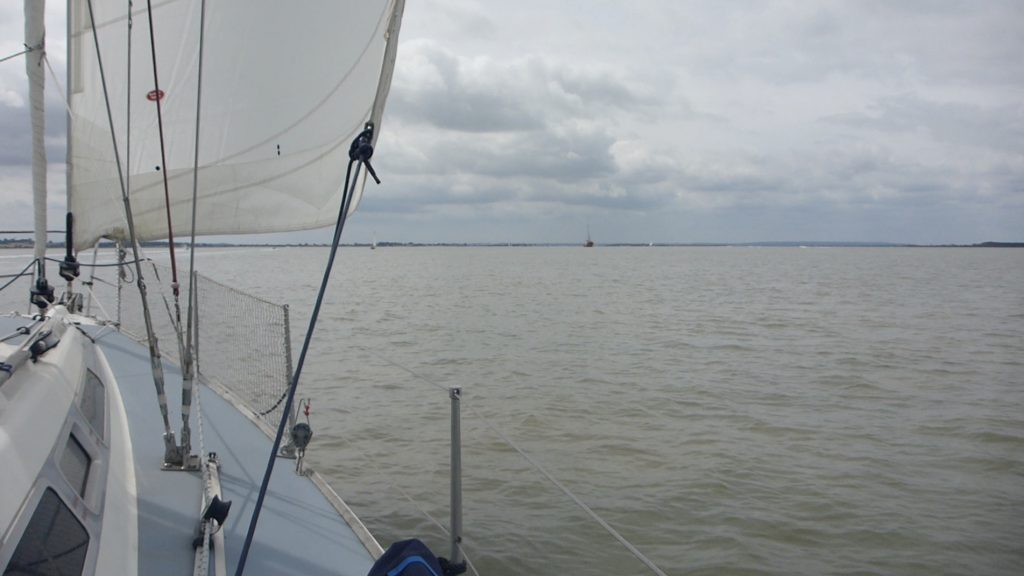 The Blackwater. A magical river …

‘Tuesday’ arrived an hour and half later at 1500, at high water Bradwell Waterside.  Both boats anchored off Saint Lawrence Creek for the night.

Doc and ‘Tuesday’ sailed back north early the following day.  Me n ‘Talisker 1’ beat out of the Blackwater before sailing in to the Colne where we anchored off Brightlingsea Creek.  I pumped up the dinghy and headed in to town.  The ship was out of Tea!!! 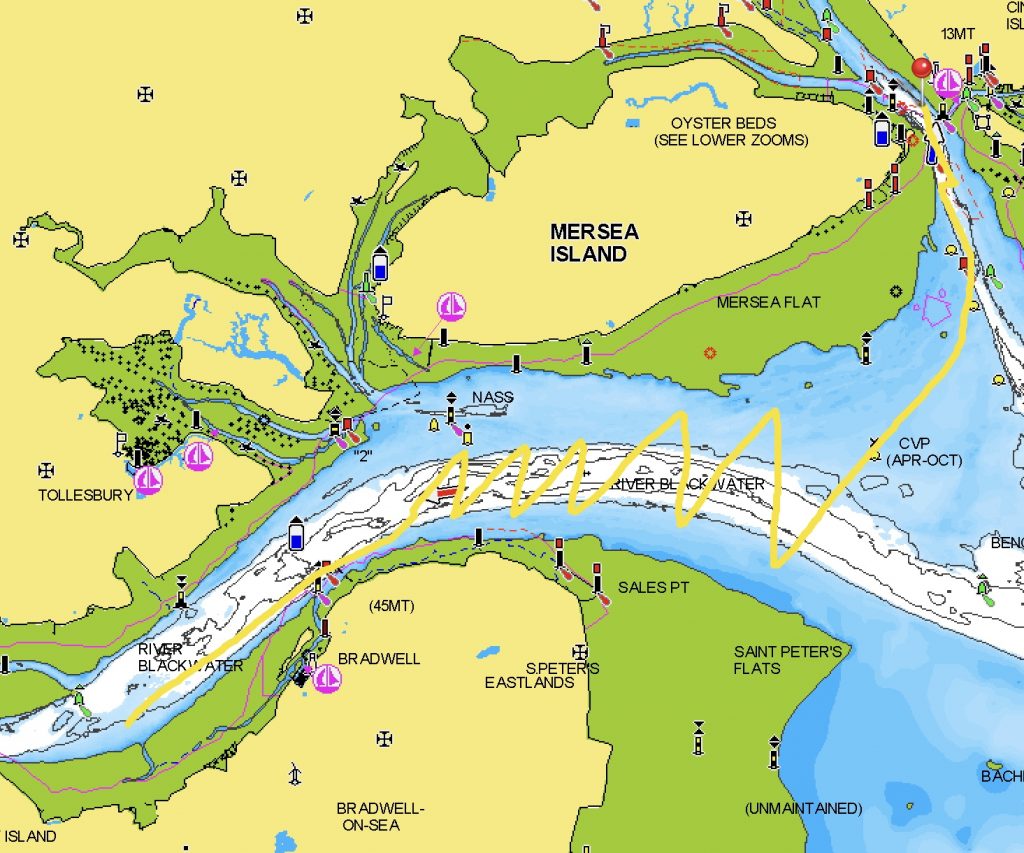 A beat out of The Blackwater … 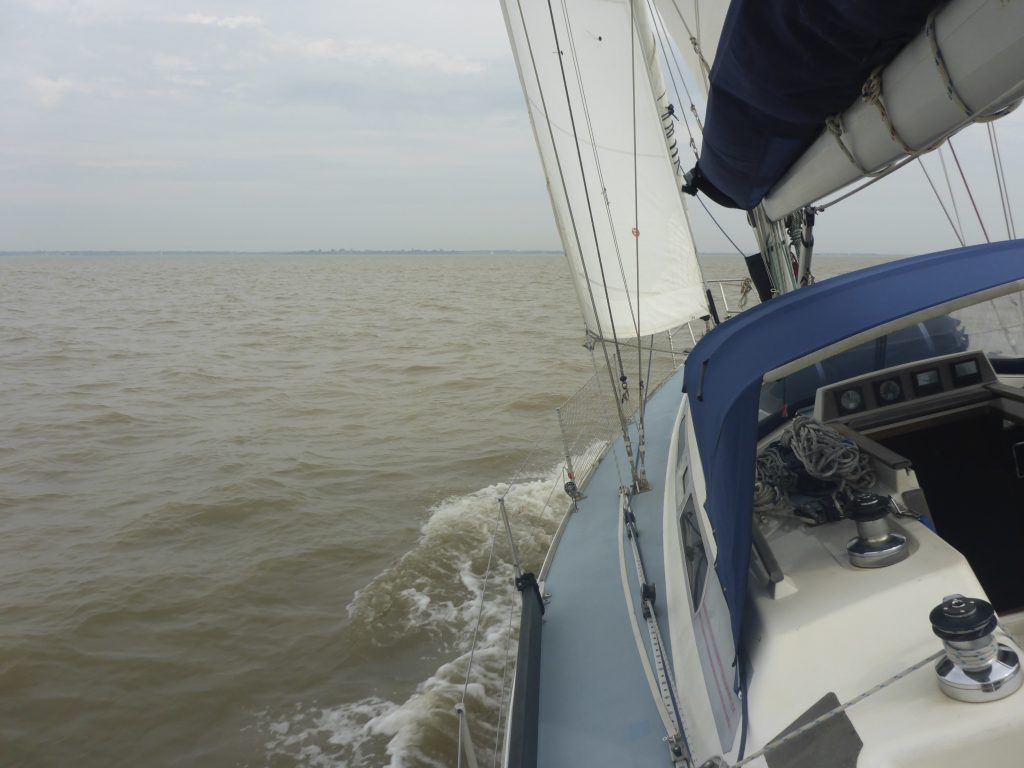 … against the flood 4th August

Returning to the boat it was lumpy and not much better in Pyefleet in the south easterlies.  I opted for Brightlingsea Harbour. 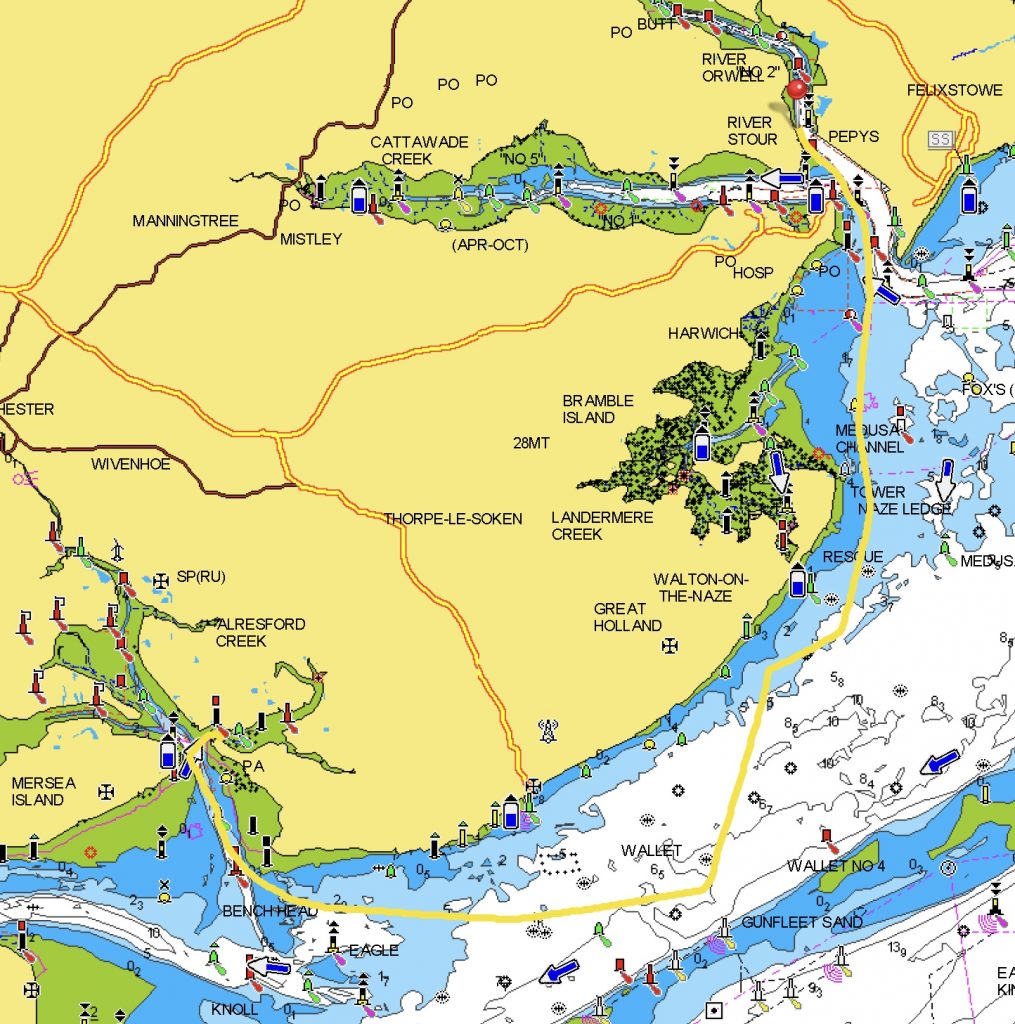 Brightlingsea to the Orwell 5th August

Yesterday was a lovely sail from Brightlingsea to the Orwell with a strong ebb tide.  The Wallet is never the same.  On a Broad reach we sailed across to the northern end of the Gunfleet wind farm before gybing on to port and sailing to Walton Pier.  A gybe on to starboard and back on to port to round Walton on the Naze and we sailed for Harwich.  Or rather, I should say, ‘Talisker 1’ charged in to the port of Felixstowe where the wind almost died. 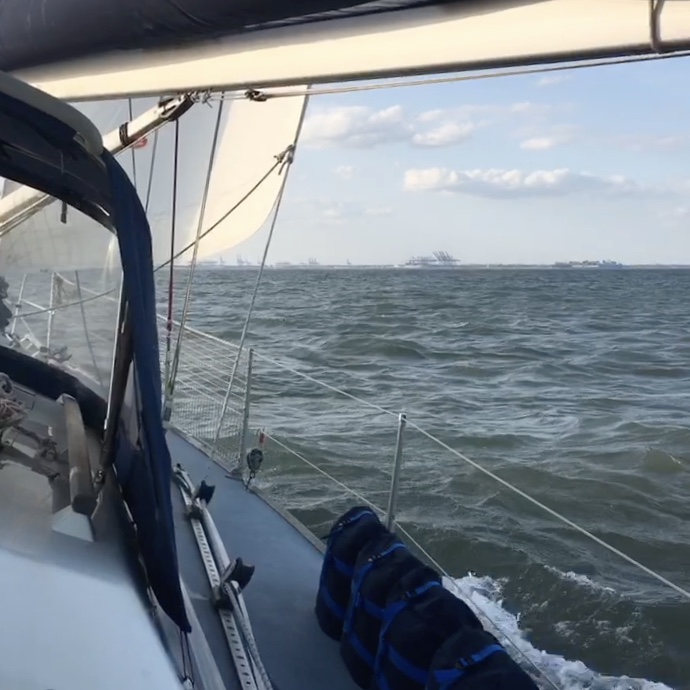 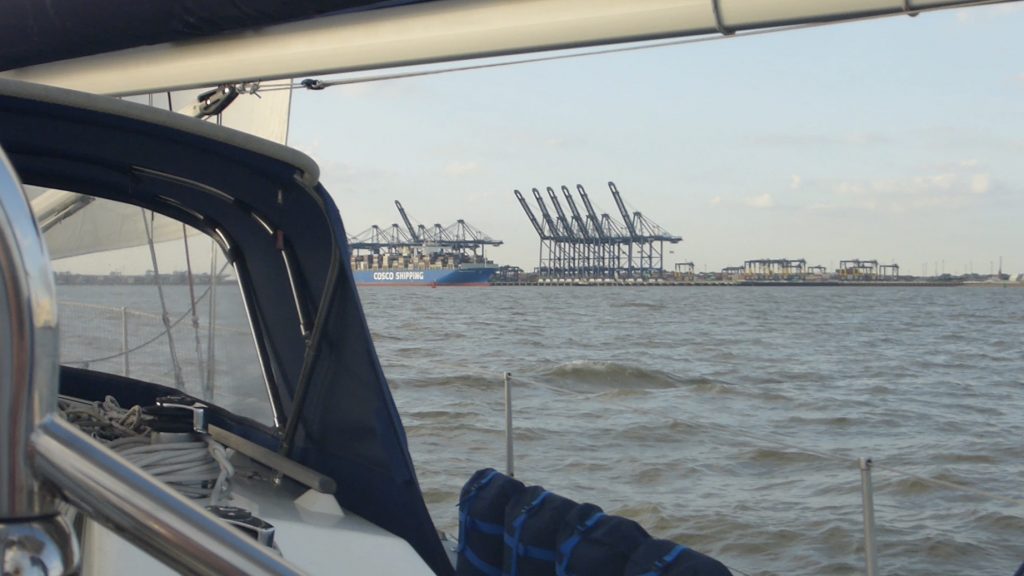 We slowly sailed through the harbour and in to the Orwell lowering the main and under genoa only gently sailed up to the lovely anchorage just inside Orwell Port Hand.  We barely made it against the ebb but finally came to a halt just inside the buoy and dropped anchor.  There was hardly a ripple but almost immediately cats paws disturbed the surface. The breeze would remain south westerly overnight.  A perfect spot.

This afternoon we will sail home to Orford in strong southerly winds.

It’s coming up to midday on ‘Talisker 1’ and I’ve spent the morning getting ready to leave my ship on the mooring and go ashore for some home time.  I nail everything down and it normally takes a couple of hours before everything is battened down.  With strong winds on their way we are prepared but this is how the ship is always left.

It’s amazing how often I help our Harbour Master securing halyards, sheets and sails etc on boats inadequately ‘put away’ on their moorings. 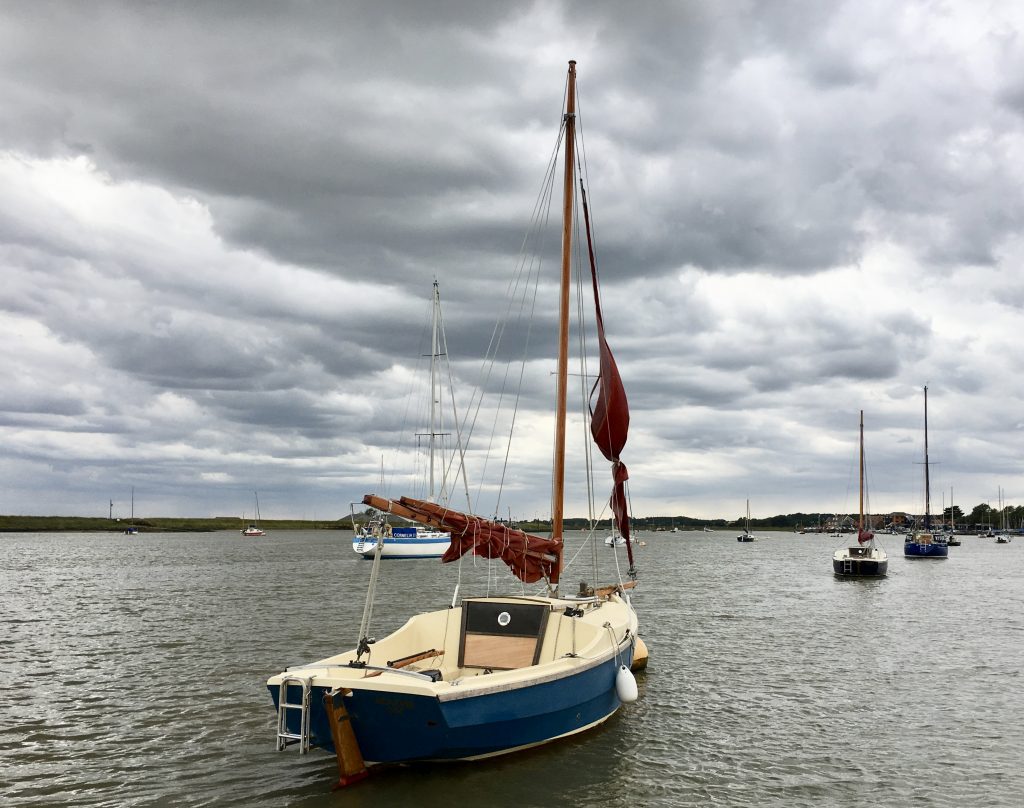 How boats lose their sails!

With this week ends heavy weather ‘Talisker 1’ is in her usual state of readiness. 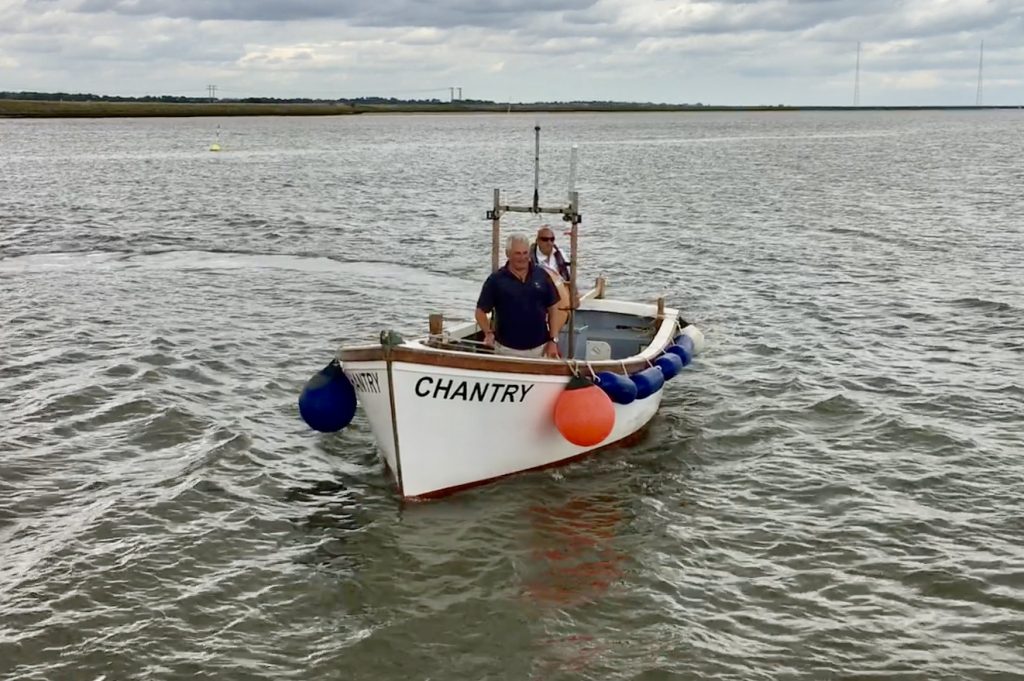 Harbour Master Philip and James Robinson collecting me from our mooring.

Yesterday we sailed off our anchorage and beat out of Harwich under a single reefed main and stay sail. 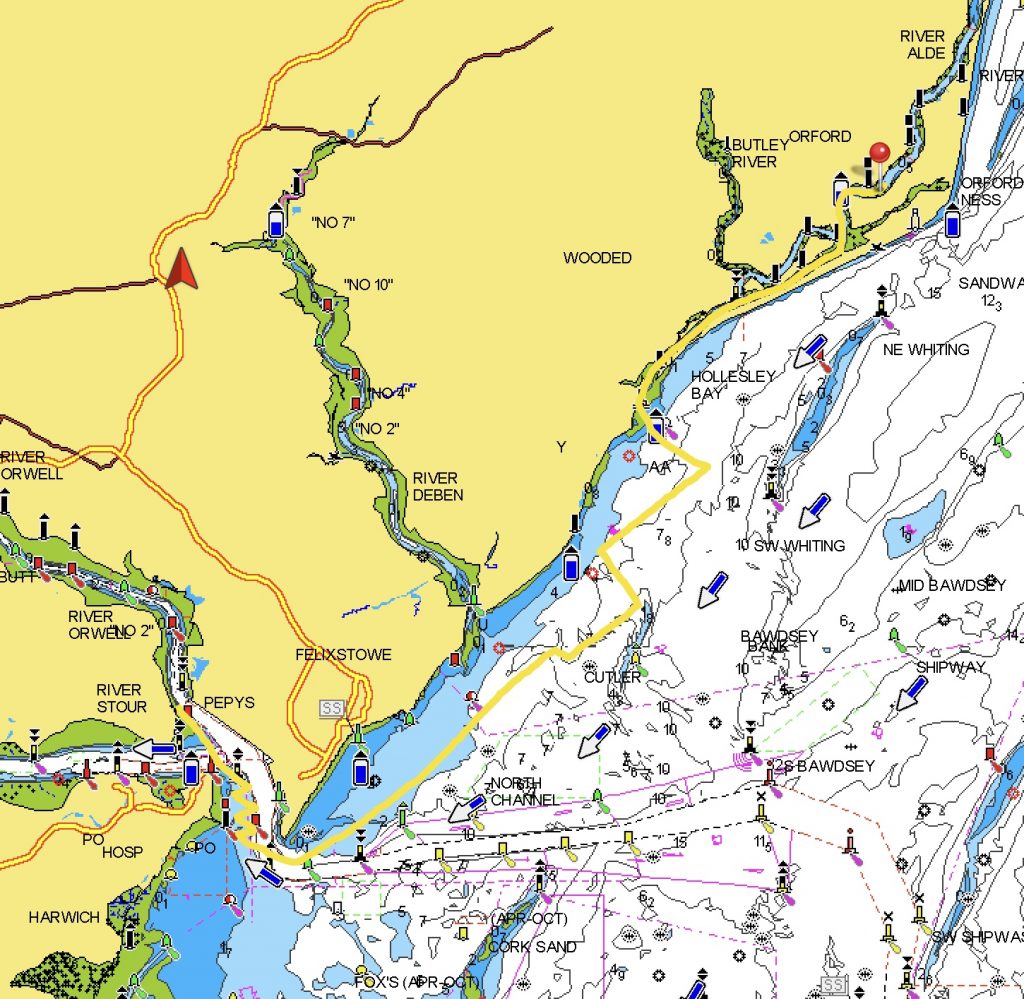 Sailing back to Orford 6th August

The wind steadily increased to a force 5 gusting 6 as we bore away up the coast and broad reached north sometimes touching 8-9 knots through the water. 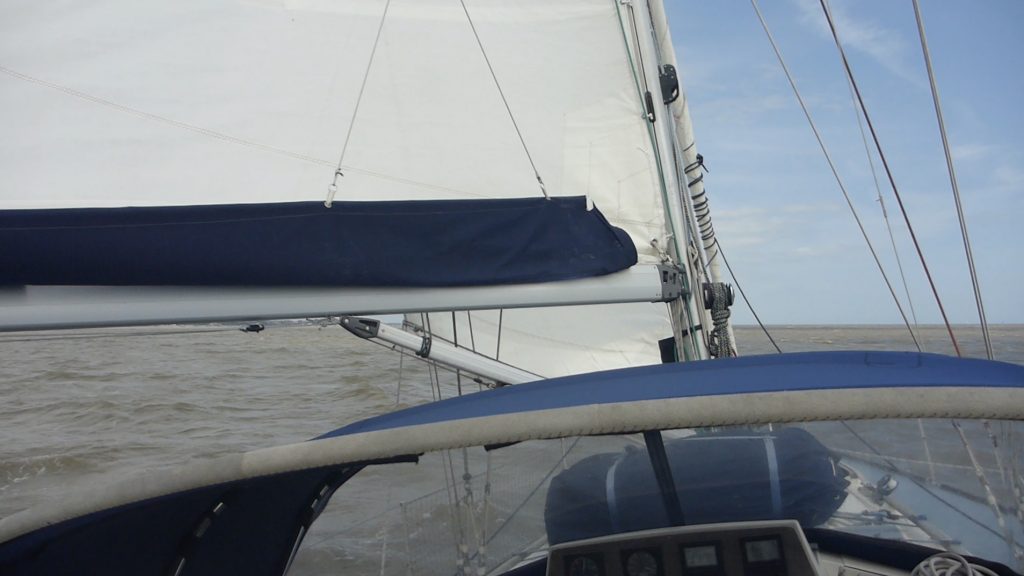 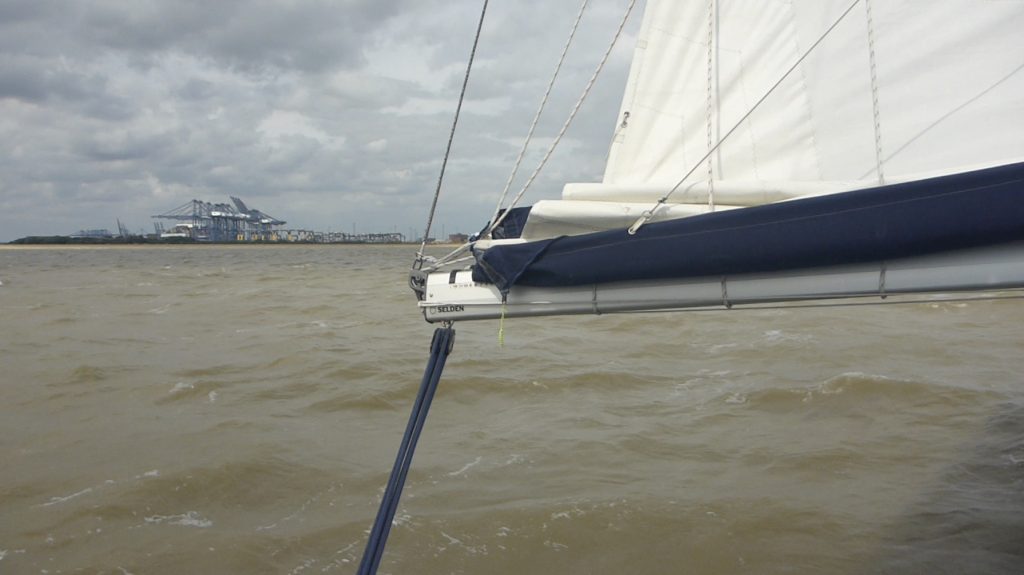 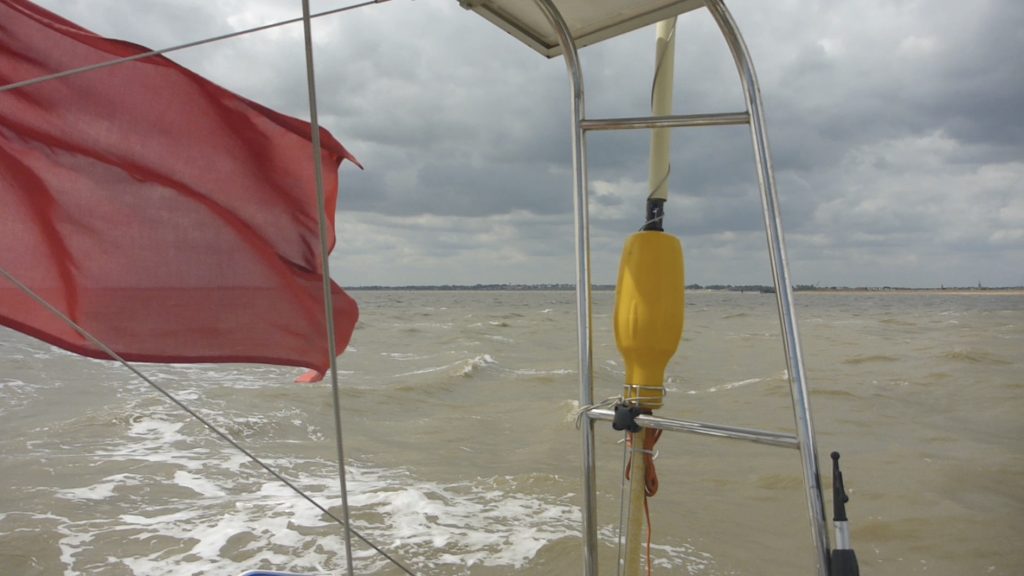 A fairly big flood was against us, which created an uncomfortable wind against tide chop.  ‘Talisker 1’ rarely dropped below 6 knots over the ground.

We sailed in to the river about half an hour before HW Orford Haven.  The current entering the river with the wind meant the bar was fairly smooth.  I had to start the engine to pick up the mooring.

Doc and Candy were both on board their boats and came over in their tenders.  We drank tea and talked long in to the night.  Two great long distance sailors.  Always fun.

Orford SC Regatta Day is cancelled on Saturday due to the very high winds.  I hate leaving ‘Talisker 1’ to fend for herself but Candy will be on board ‘Endeavor’ and keeping an eye.