The adventure begins. Nerves are jangling.

In many ways I’m loath to leave home. Leaving Sally, my elderly Mum and there is always loads to do at the home. Plus … chums at the sailing club. I always wonder if I can get home.

Not surprisingly it looks very difficult to get down Channel. The prevailing winds point us to the north and I have an eye on Lowestoft tomorrow to give the ship and me a good test. I would have loved to have sailed to Cornwall to see my grandsons.

Philip, our Harbour Master was brilliant today. There was a fair amount to put on board and Philip collected me off the SC pontoon where I had unloaded from the van.

It’s 2000H and everything is stowed. It’s going to be a quiet night on our mooring. Sail covers are removed and we are ready to take the ebb up the coast in the morning in a light southerly breeze. We will get under way at 0900. HW Orford Haven is 1030. 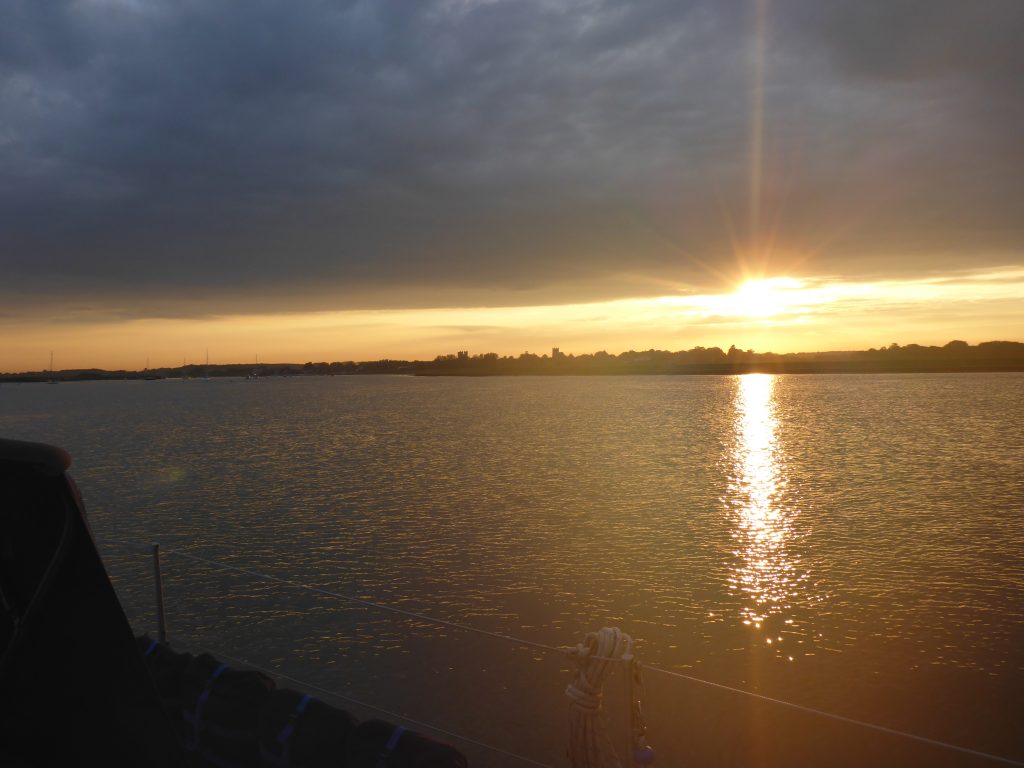 6th June. Sunset over Orford the day before departure. 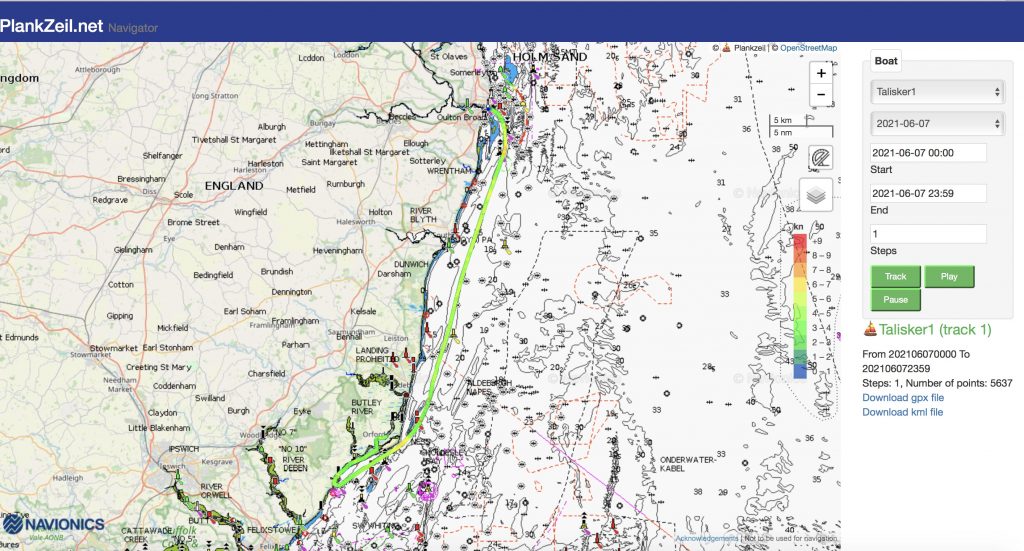 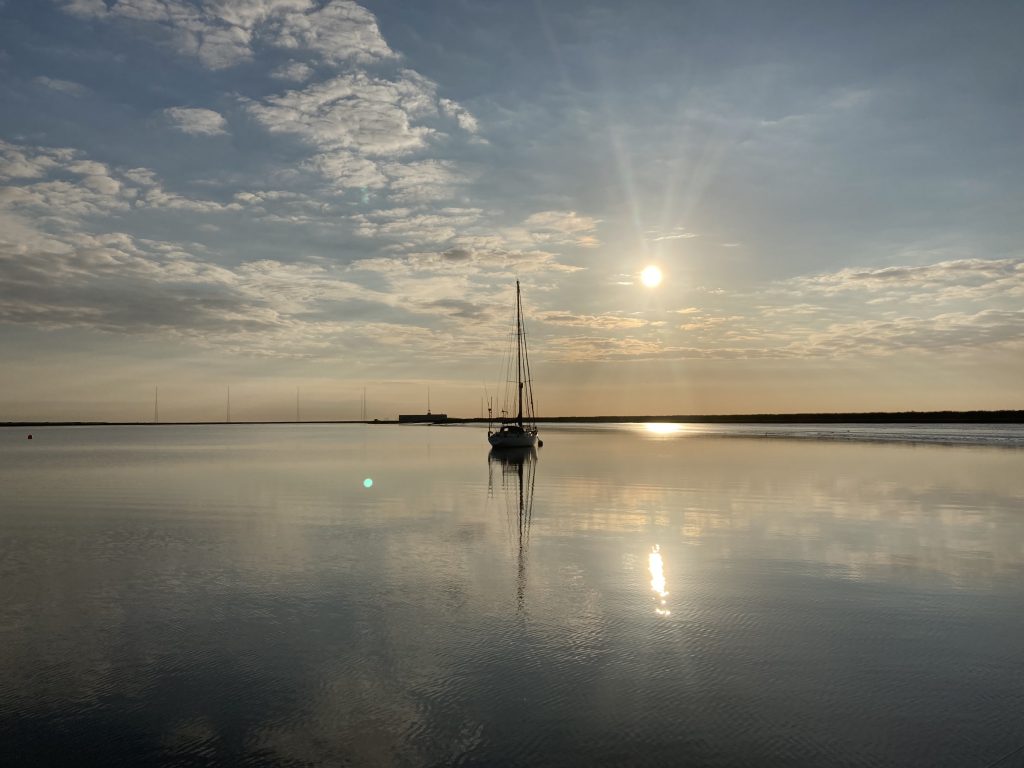 7th June. Dawn and Rival 41C ‘Tuesday of Ore’ on her mooring. 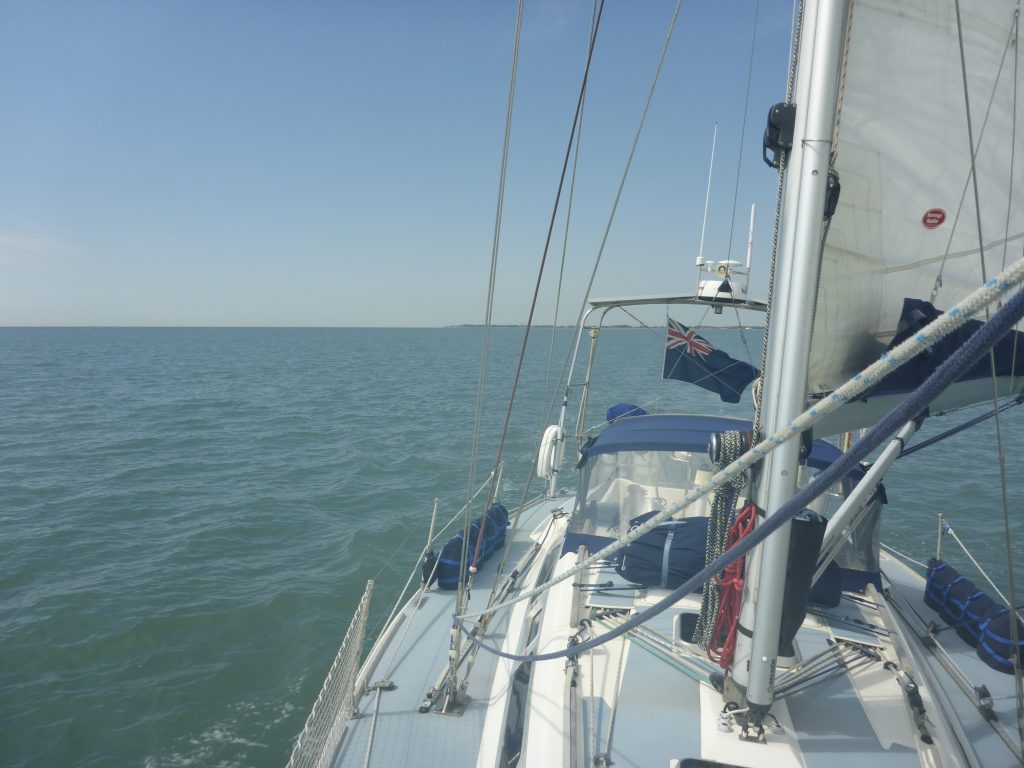 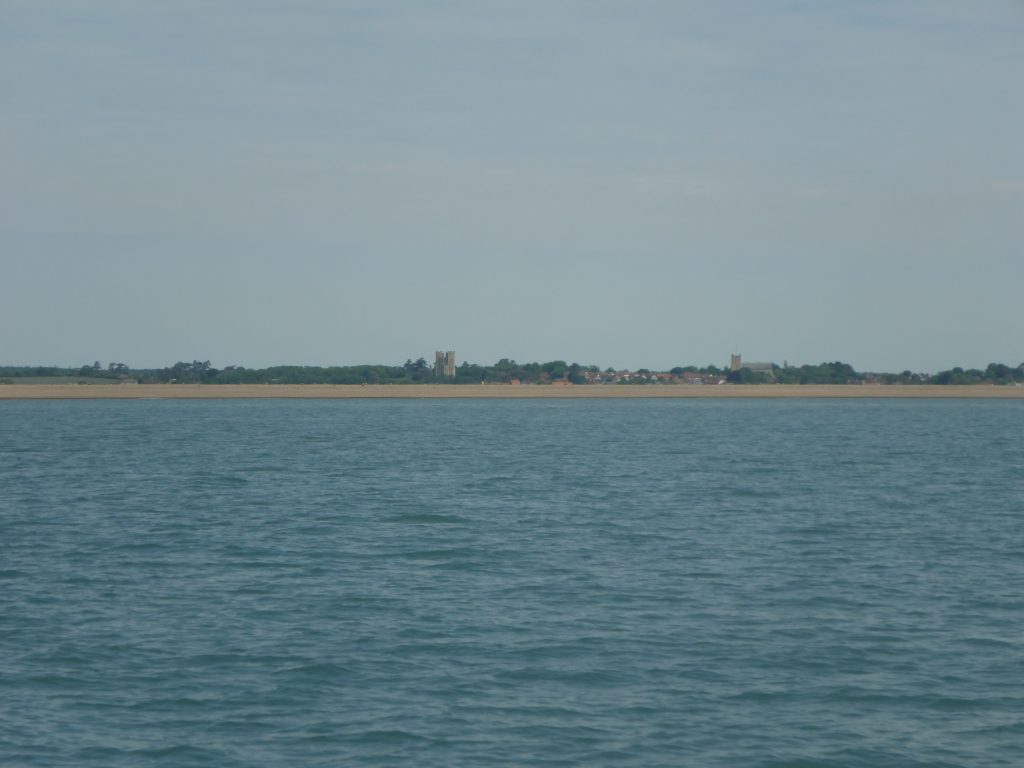 7th June. Passing our Home Port of Orford on the seaward side of the Spit.

We are safely berthed in front of the Royal Norfork & Suffolk YC after a safe passage from Orford. Thank goodness for the ebb tide! The south easterly winds were very light indeed so it was predominantly current that helped us progress. It’s the first really warm day afloat this year.

The yacht club is open to visitors provided they are from the UK. Normally there would be some Dutch, German, French and Belgian ensigns in the basin. Lets hope that some sort of normality returns soon.

It was a sad day for me passing Orford Ness without its light house. Just a pile of rubble on the Ness to mark the spot of this iconic building. 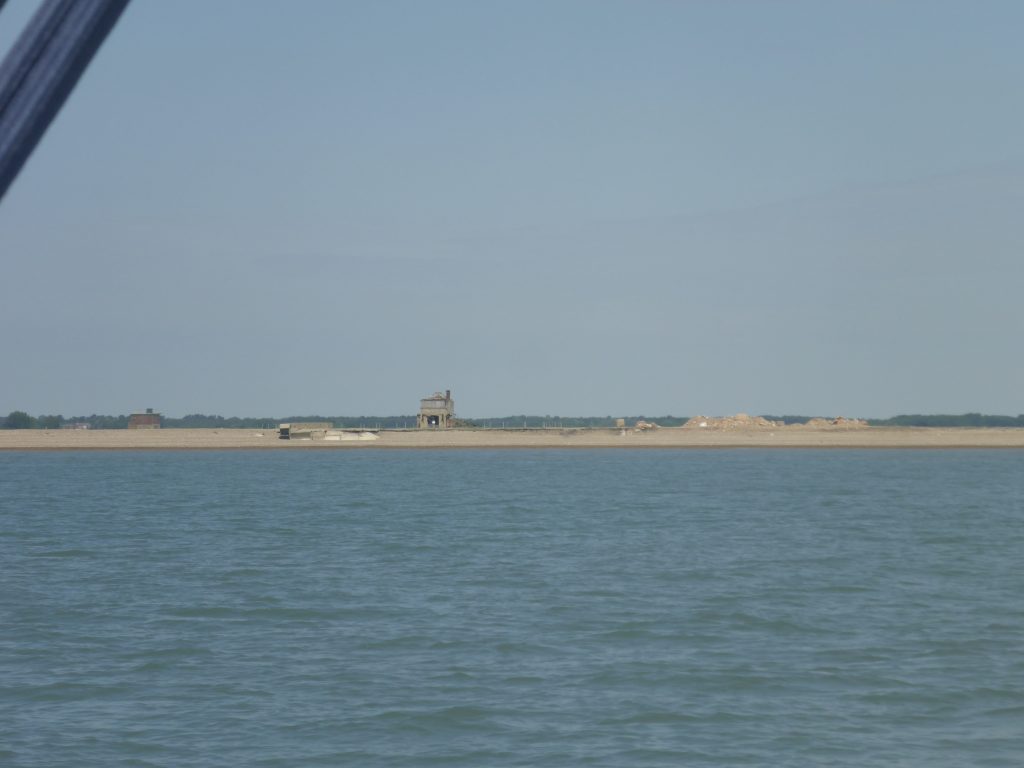 7th June. Passing Orford Ness. A pile of rubble to mark the spot of this iconic building. 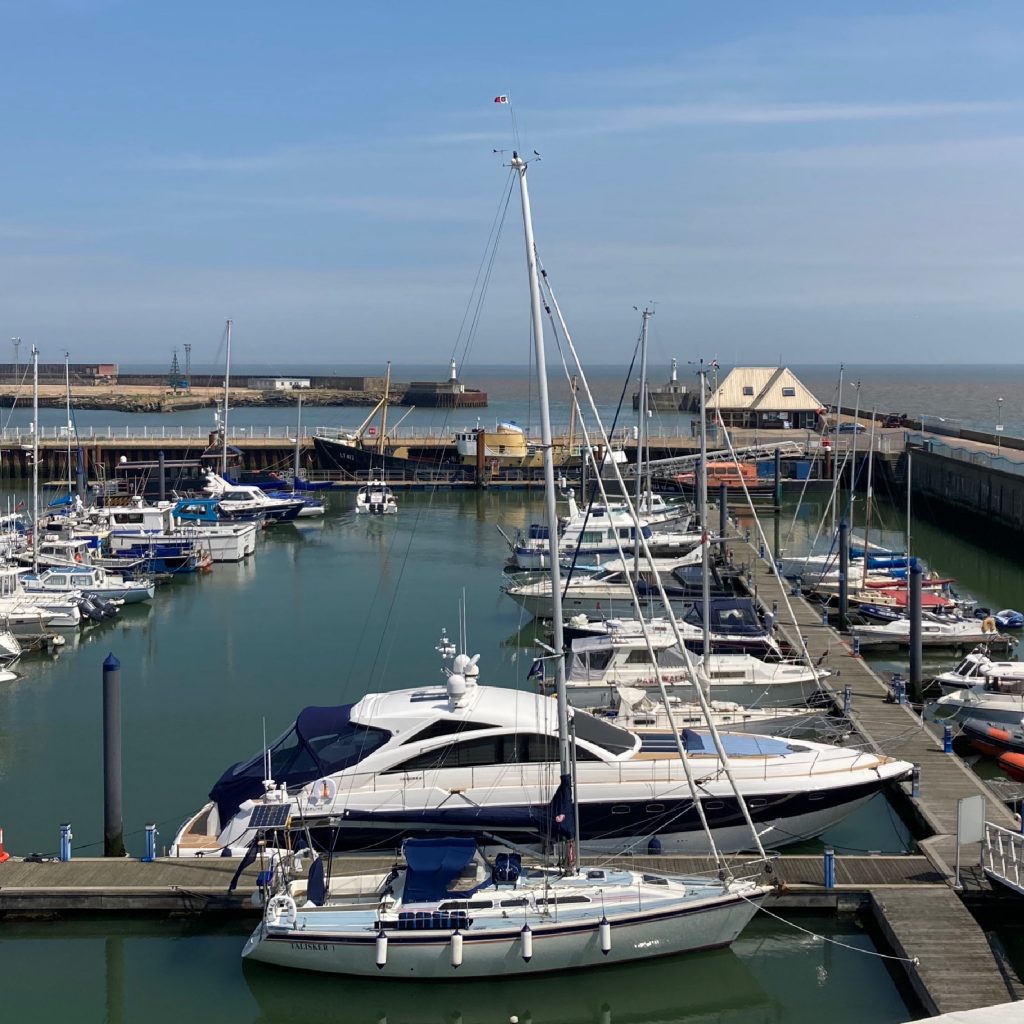 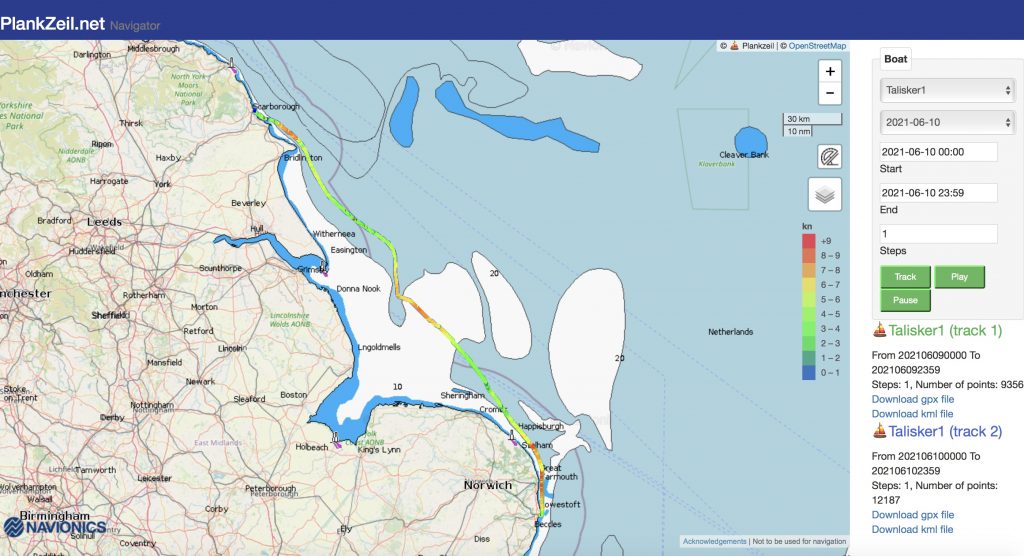 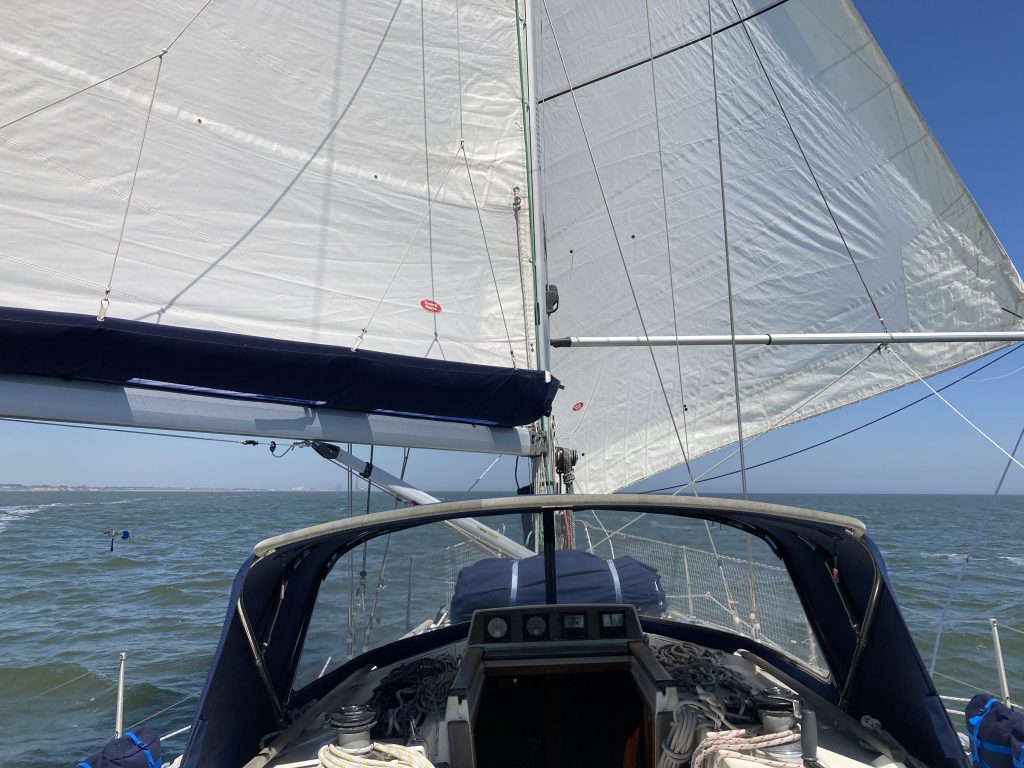 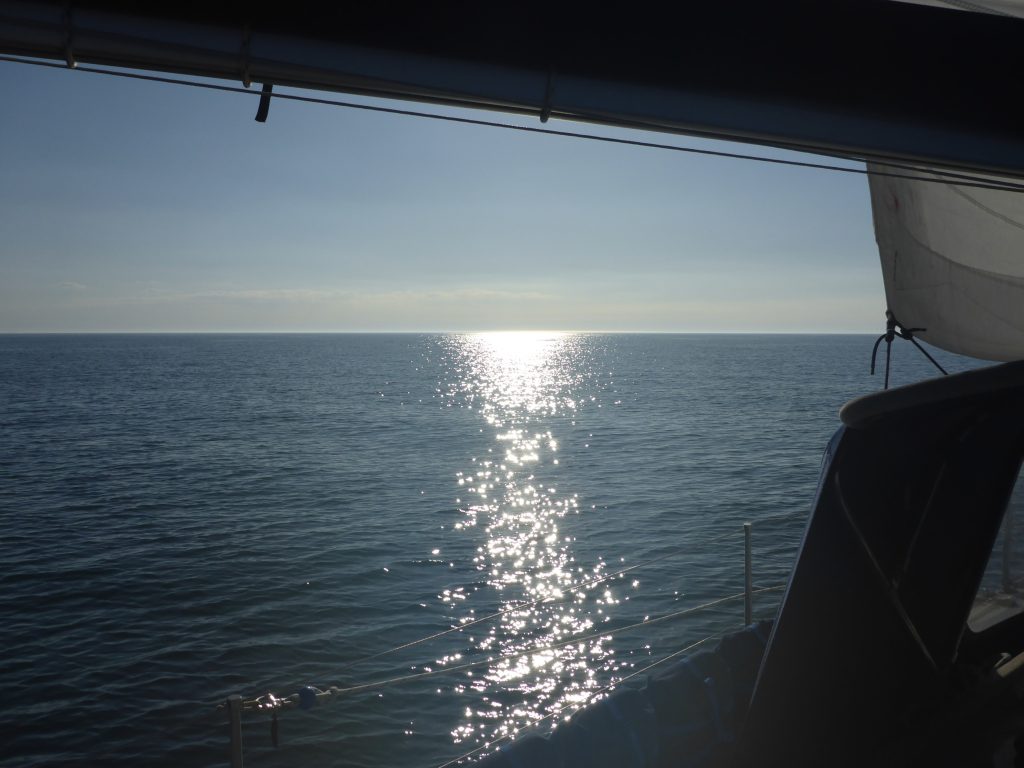 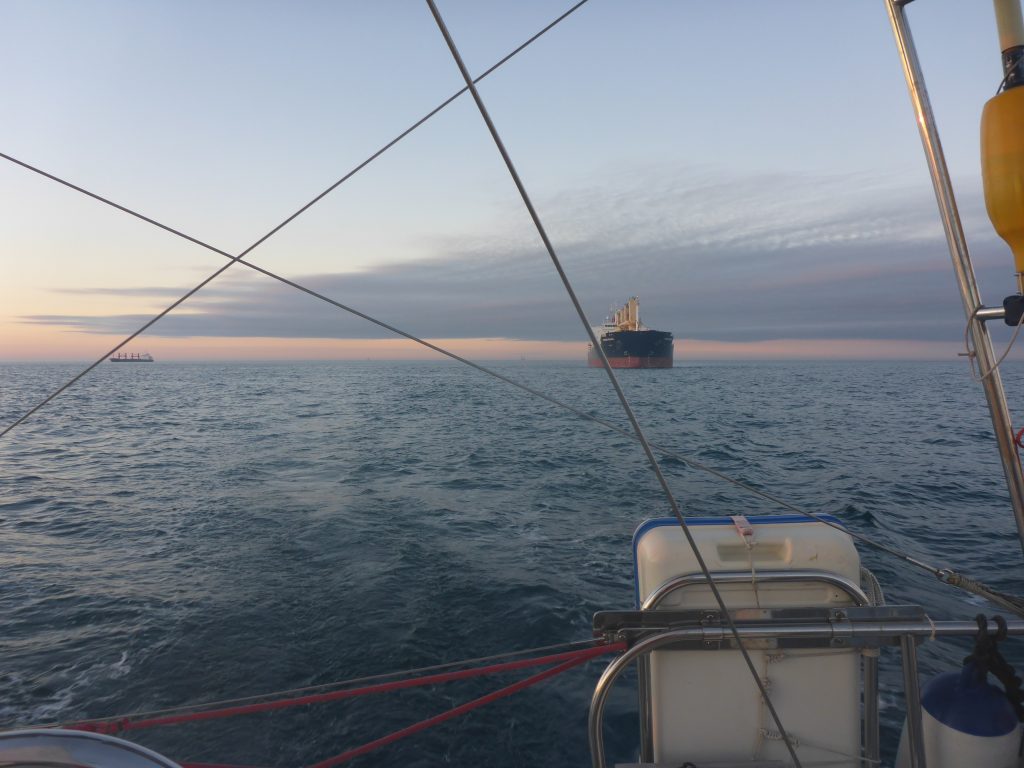 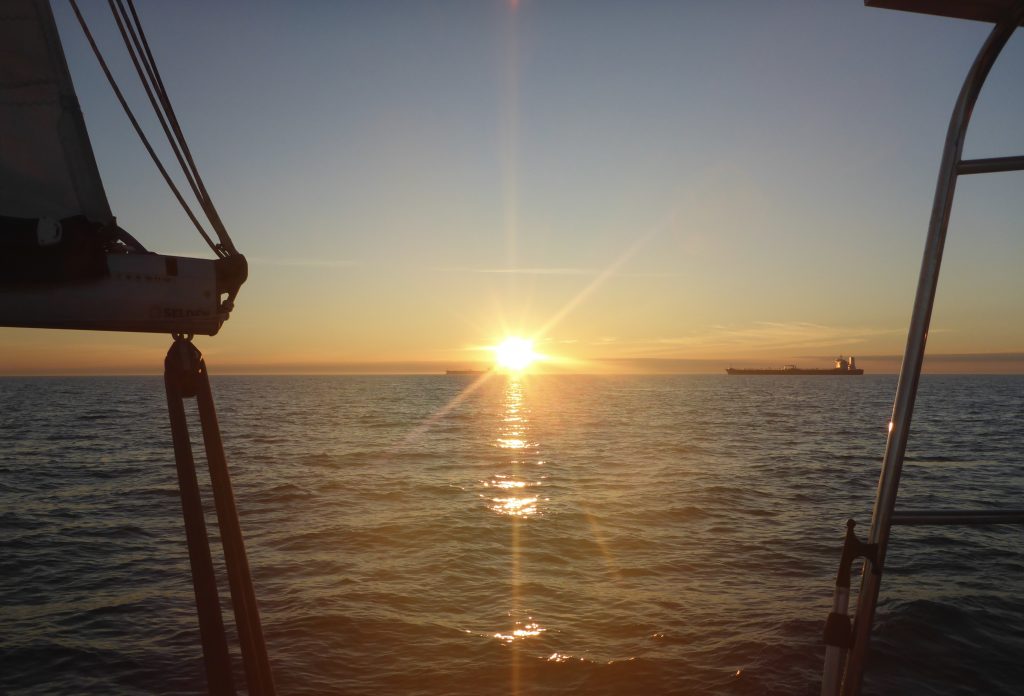 It’s 0800 and we are 12 miles south of Flamborough Head. It seems my hopes of seeing this headland on a clear day will be dashed again. Cloud has thickened since dawn this morning. We have been underway since midday yesterday. Let’s hope the visibility holds.

From the Humber we have nimbly threaded are way through anchored ships, fishing vessels, guard ships, lobster pots, off shore installations, wind farms etc. You struggle to find open water out here. As we get further north the pots seem to be better marked. They practically have totem poles. Further north swift currents sometimes bury them. Coastal sailing!! Why do we do it? Saying that …I wonder if the offshore wind farms lay a few pots? We had a narrow escape from two on the seaward side of Sheringham Shoal Offshore WF. That’s probably answered that question. We will not have open water until we leave the Farne Islands astern.

This sail has been a serious test for me. At one point I questioned why I was undertaking such an arduous coastal passage after eighteen months of little sailing due to the pandemic. You can’t drop your guard when coastal sailing. Rounding the Norfolk coast and crossing the Wash and Humber approaches is particularly testing. Whitby and Scarborough are a long way for a single hander. There is no rest. Give me the open ocean … any day.

I have not sailed much since 2019. Last year I barely covered 500 miles in familiar waters close to home due to Covid. Despite sailing hundreds of night hours I have not sailed far at night with my much improved eyesight. In short, I am out of practice, out of rhythm, and … older.

Before Cataract surgery I wore glasses all the time. I never took them off, even when covered in spray except to clean them! Now that I just need reading glasses there was a new habit to learn, particularly at night. I needed my reading glasses for my chart work, both paper and electronic. I need them much less in day light. Having to make sure I could first find and then put reading glasses on needed practice.

We were out of the thick of it at dawn and we’ve been on a lovely beam reach since then. About 10 knots from the south east caressing our sails.

There was light in the north the whole night. I hope to make it far enough north and experience some very long summer days.

I’m on the bridge of my ship. I’m under the spray hood and the laptop is on the hatch. I have a special seat in place of the wash boards at just the right height. The perfect place to keep watch.

Flamborough Head approaches. We must concentrate. Loads of pots.

The south westerly winds came and went but we sailed all the way. Flamborough Head was crystal clear against a grey sky. The wind increased in strength from Flamborough Head and with the flood under us too we would have arrived bang on LW Scarborough. We hove to for a couple of hours and waited for the tide to rise and then took our time, entering the harbour at half tide, after a passage of 143 miles and 26 hours. 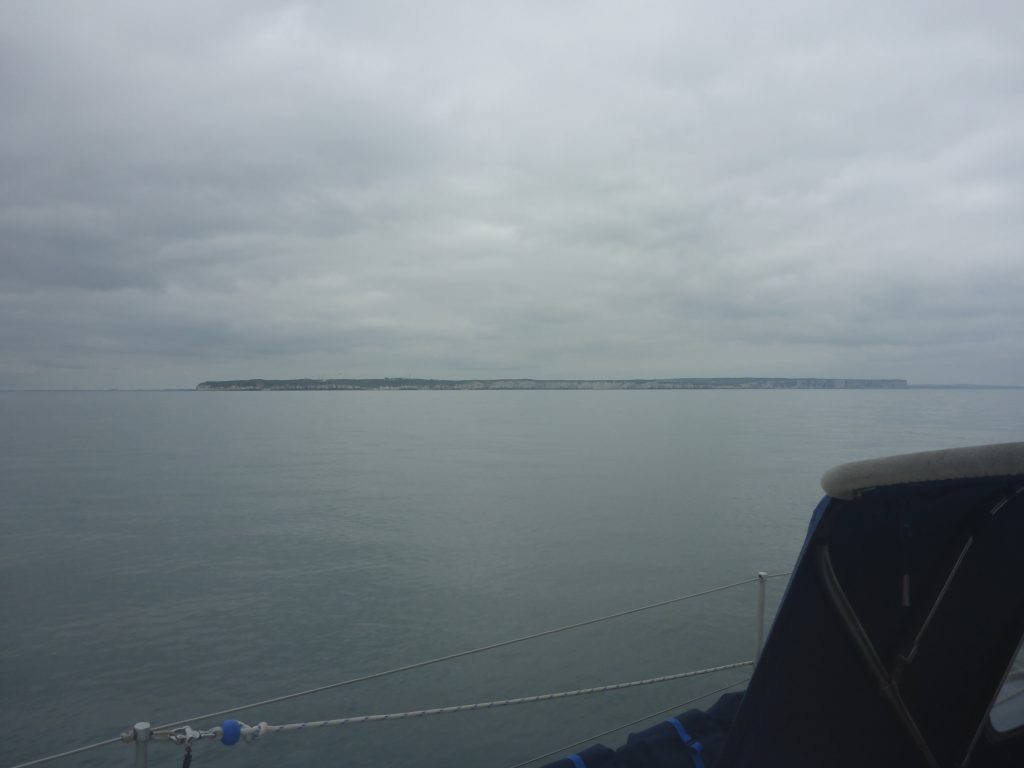 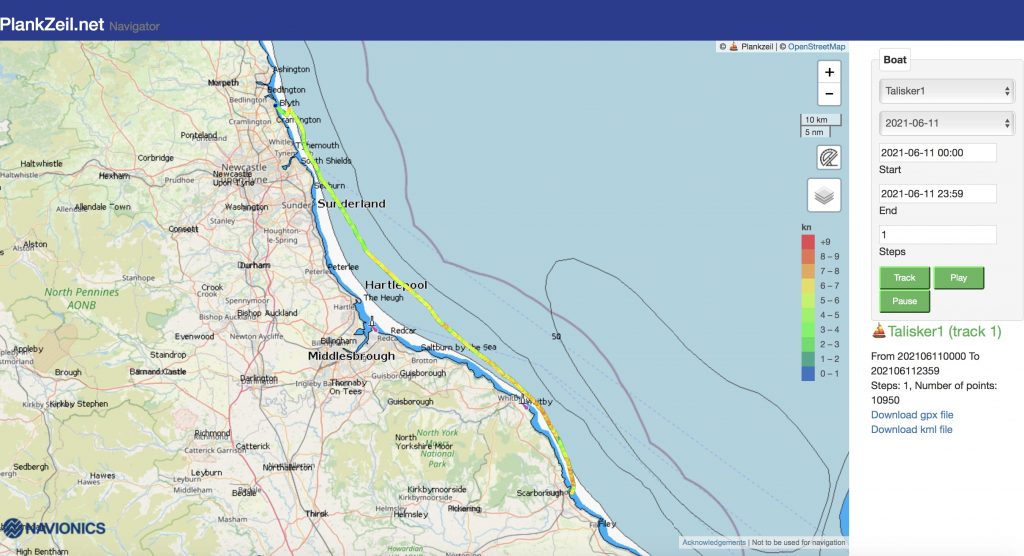 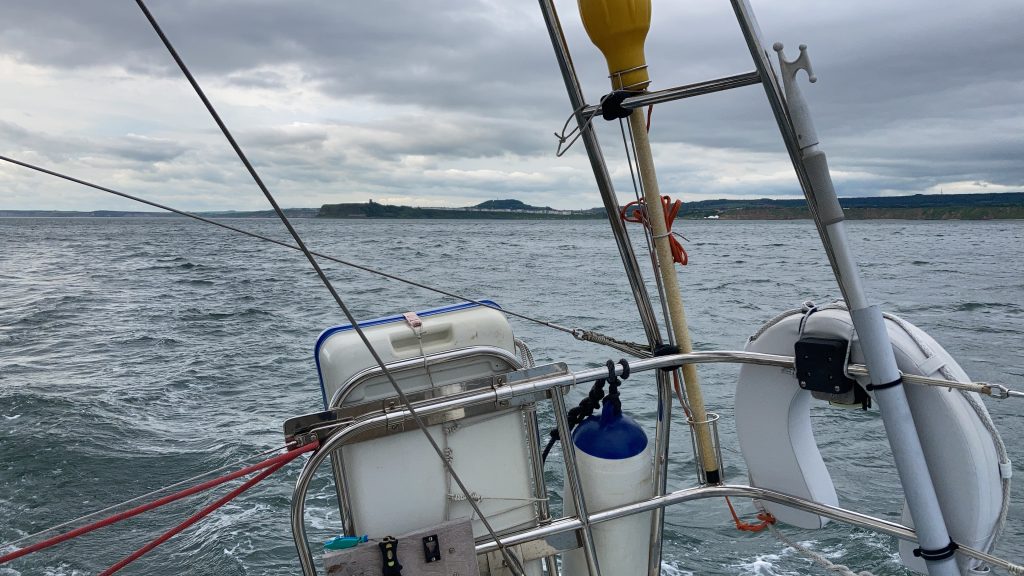 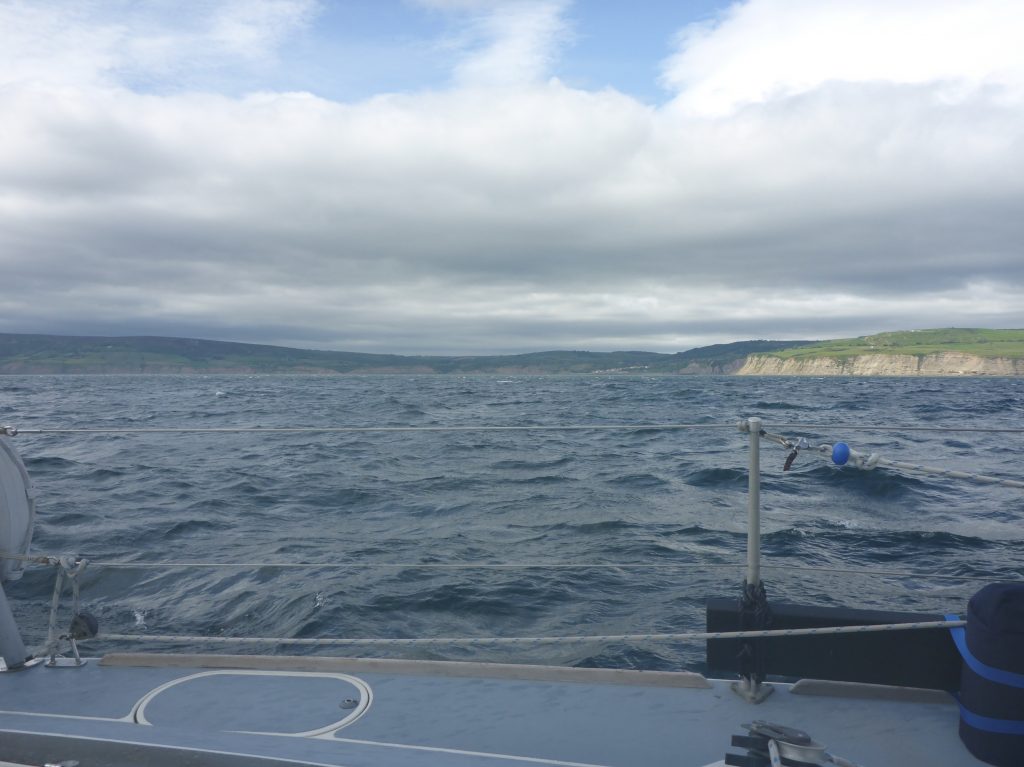 11th June. A beautiful coastline on the approaches to Whitby. 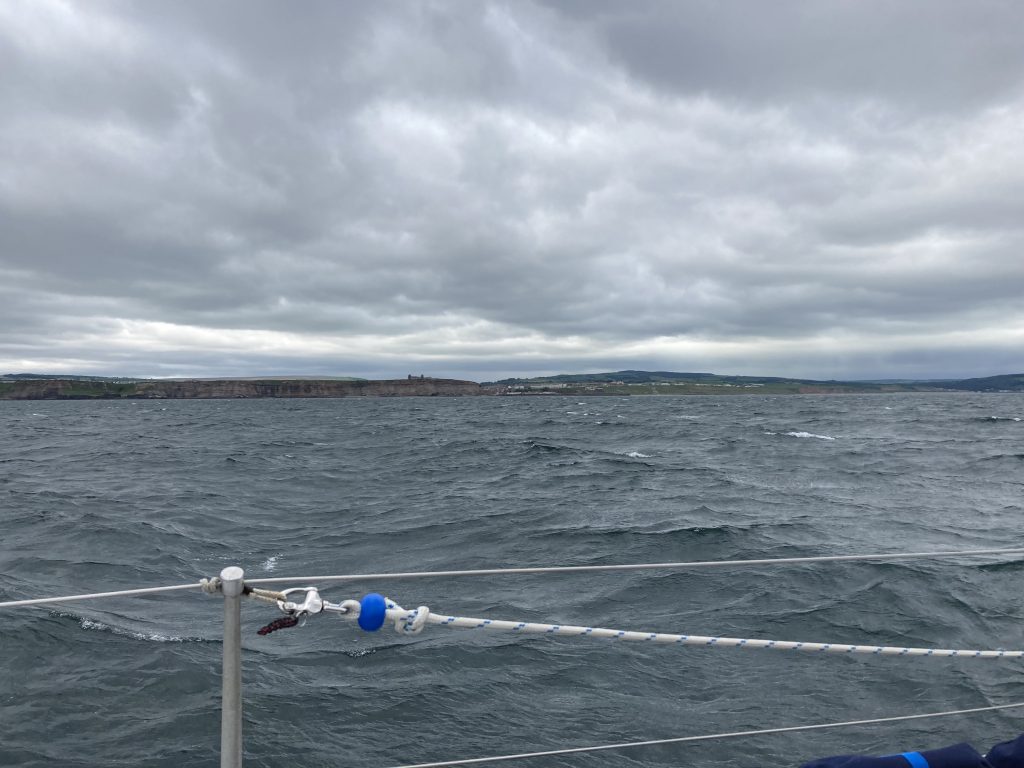 The Jet Stream is playing merry hell with the weather.

There is no question that I’m physically much less able than I was in 2018.

Me n ‘Talisker 1’ are in Amble Marina. We arrived from Blyth the day before yesterday.

Having arrived in Scarborough on the 10th and following twelve hours of uninterrupted sleep, a weather window presented itself to sail from Scarborough to Blyth on the 11th. It would have been good to have stayed another night and catch up with Tom Hill and his family. I was able to say a brief hello to Richard Oakes, now 90 years old. I had met Richard in 2017. Richard, a retired master mariner, finished his career as Scarborough’s Harbour Master. So many seamen finished their working lives with shore based jobs involving the sea. A Harbour Master or Coastguard who had spent their lives at sea were a wealth of knowledge and experience. Former Master Mariners taking these jobs have sadly decreased … and with that, those at sea are in more danger. Coastguard Stations should be local and have that all important local knowledge. I say no more.

The sail to Blyth was lively and close hauled on a port tack for most of the 70 miles under stay sail and predominantly double reefed main. Occasionally we had to shake out a reef and even all reefs as we crossed Tyne Bay. I tried to hug the bay, with the wind off the land. 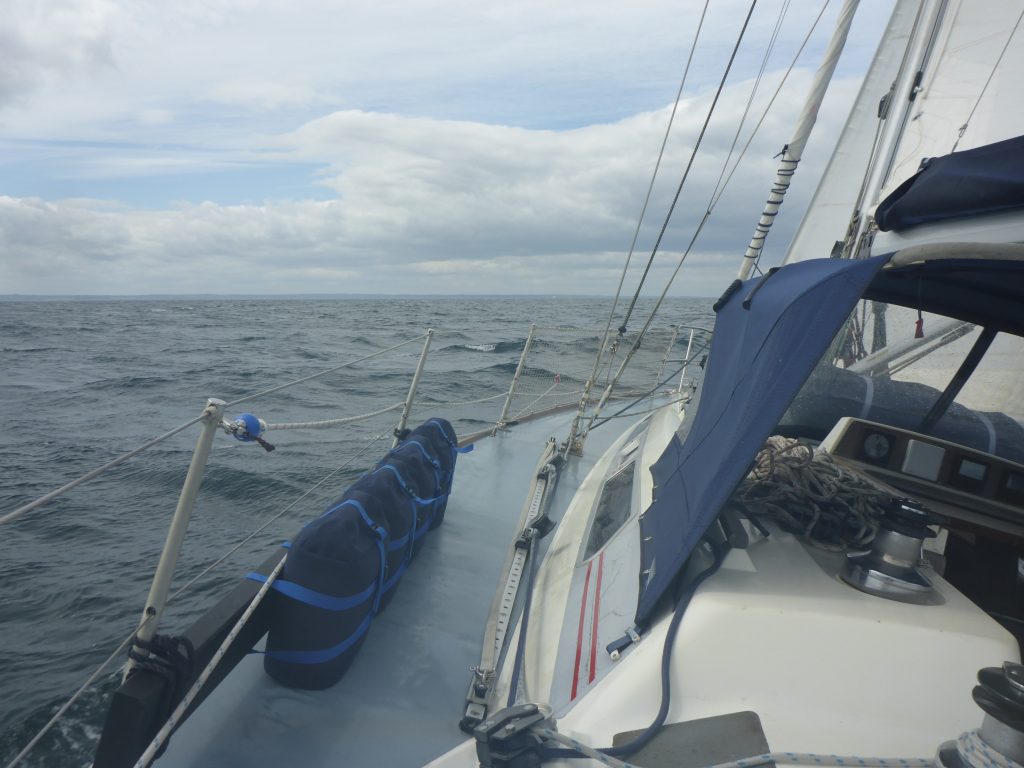 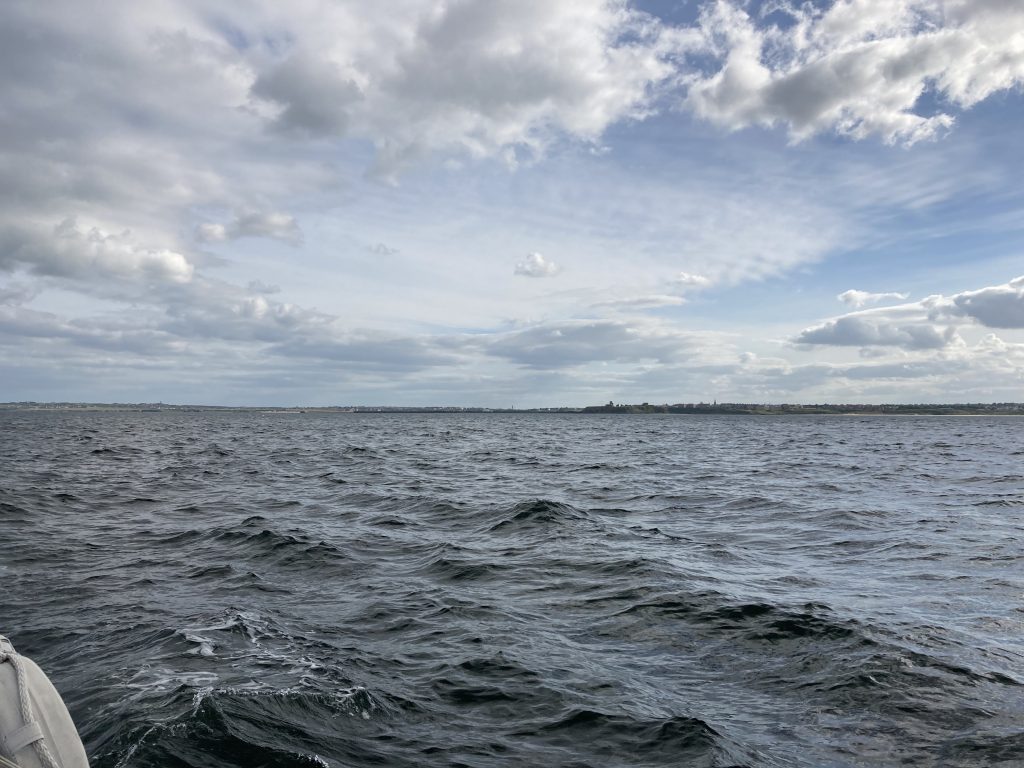 11th June. The entrance to the Tyne.

The showers and loos at the Royal Northumberland YC are closed. Looking at the weather over the next few days I thought I ought to sail to Eyemouth immediately and await a weather window for Peterhead but Eyemouth is closed to visiting yachts for a week. I did not want to stay storm bound in Blyth.

On Saturday morning the Royal Northumberland YC were starting their celebrations for the Queen’s birthday. I was preparing to get underway as many of the clubs members boats, mostly ‘dressed’, were getting underway.

I was warping ‘Talisker 1’ back out of a corner for a simple departure when a female apparition appeared on the pontoon beside me. She called a yacht that was already underway. Her voice would have carried to Lowestoft. She wanted to be collected from the pontoon. Looking up and down at me, she said something about ‘knowing my intentions’. If it wasn’t obvious to her I certainly was not going to explain.

Thankfully for me and ‘Talisker 1’, she boarded a small yacht owned by a kindly old gentleman further down the pontoon. She was picked up off this small vessel by quite a large sailing vessel with a blue hull who made a complete hash of coming alongside. There was a crunching collision and lots of shouting as the old bag was transferred. The old gentleman took it very well. I would have been very unpleasant to deal with had they come alongside ‘Talisker 1’ so incompetently.

I was thrilled to get away unscathed. We sailed just 17 miles north to the River Coquet and Amble Marina. We have a terrific berth and the marina is very well run. We received a warm welcome from Steve and Will. 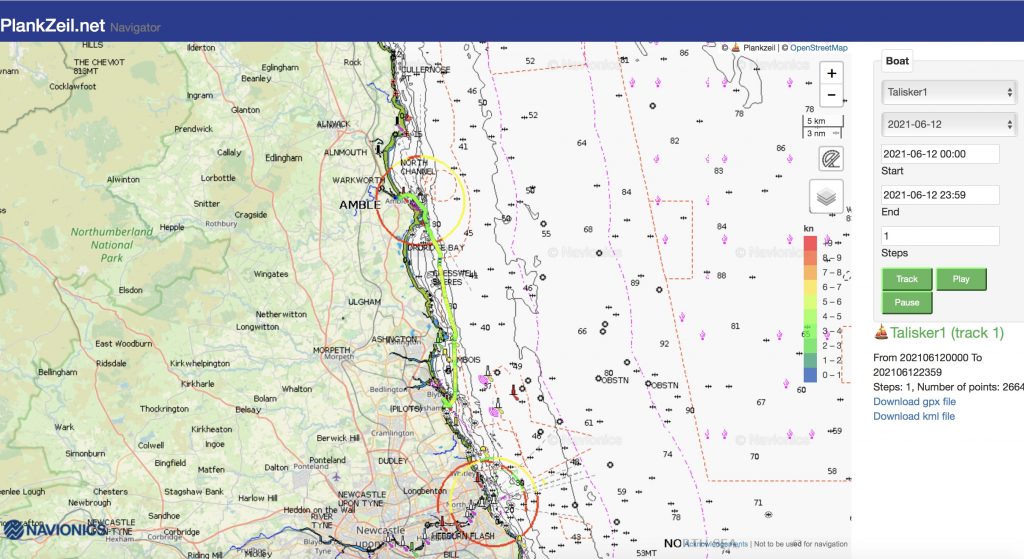 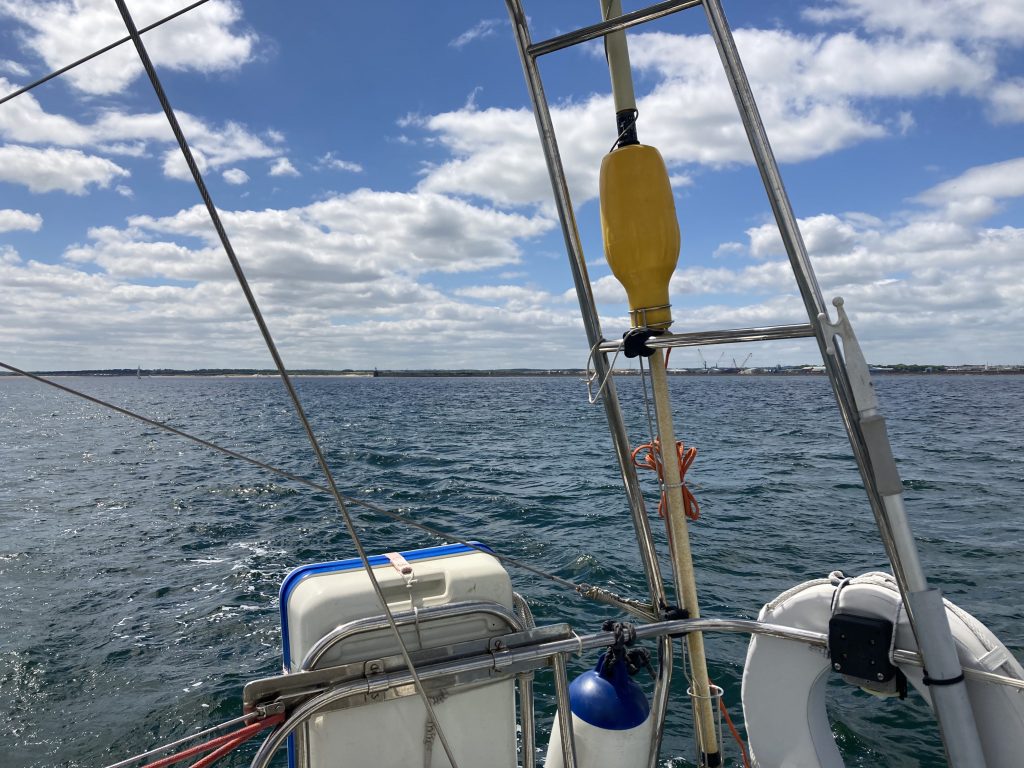 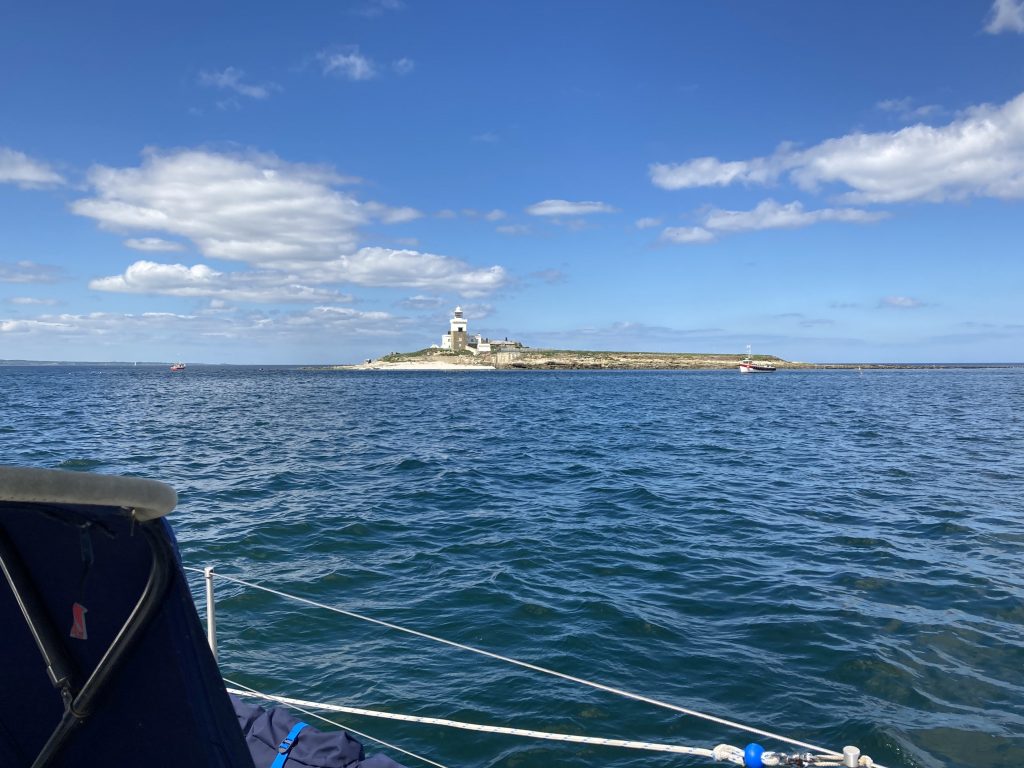 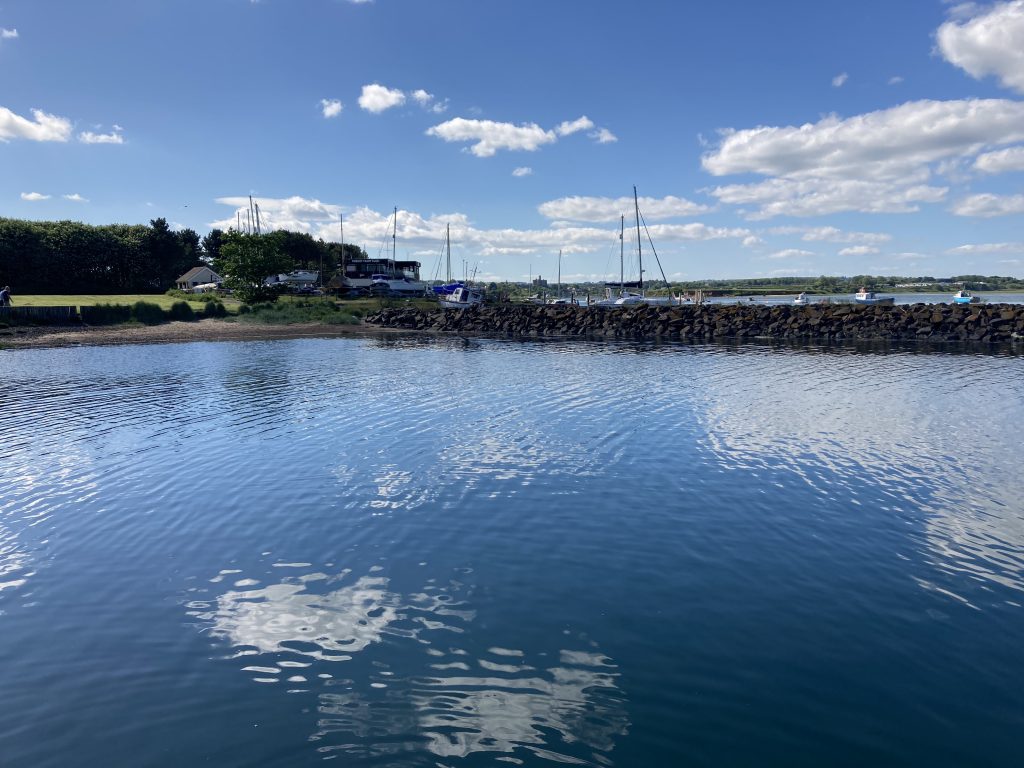 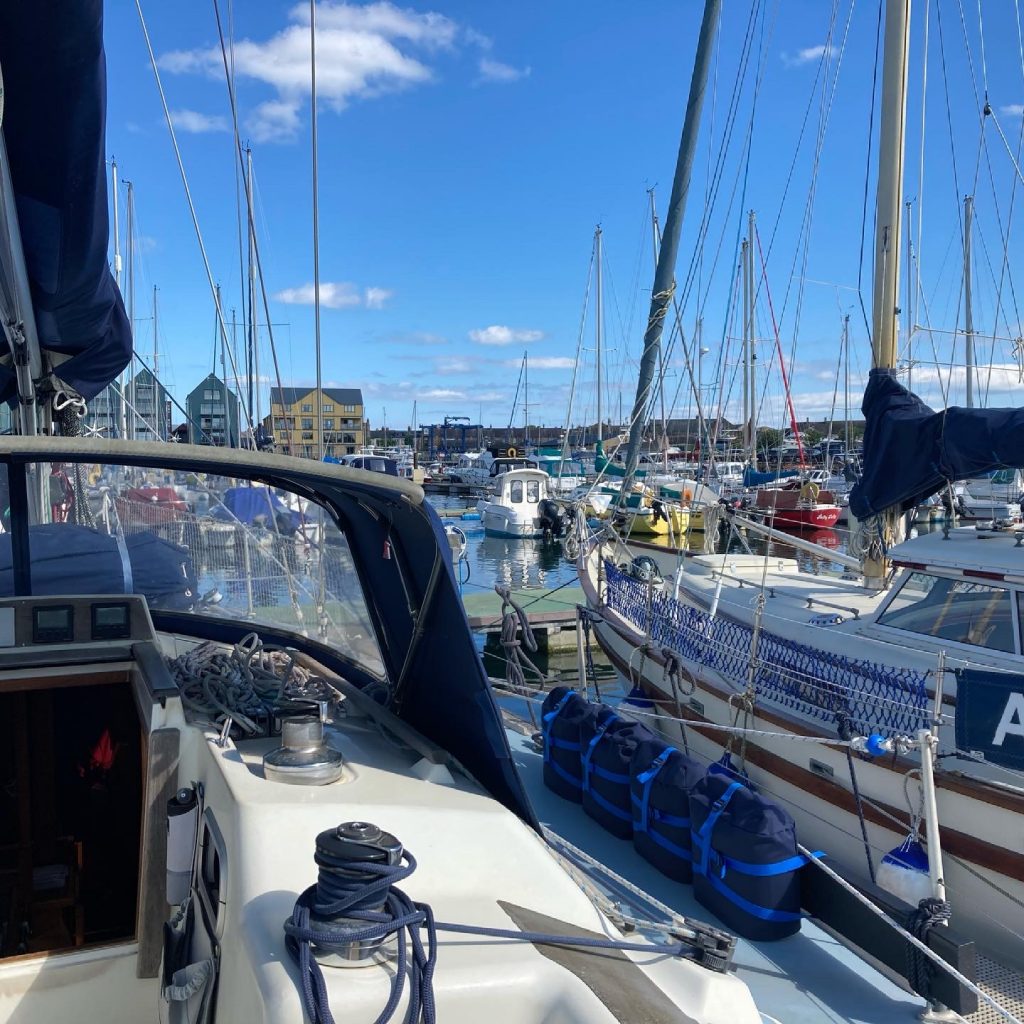 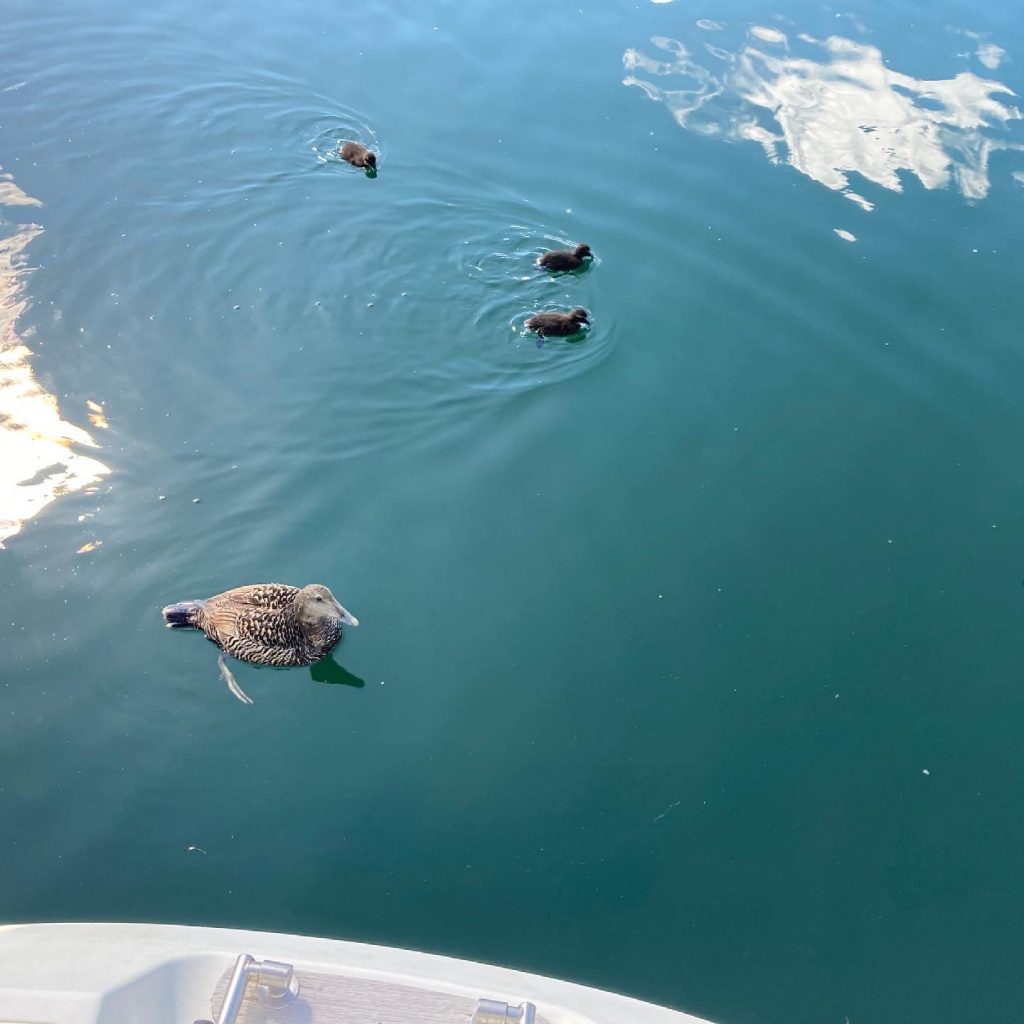